Mario Rosenstock: ‘I may be sentimental, but I’m not a complete sap’

All I want for Christmas: Mario Rosenstock, actor, comedian and impressionist on the best best and worst of Christmas 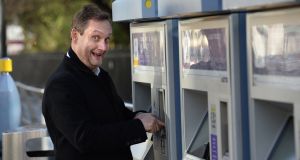 When do festivities usually kick off in the Rosenstock household?
I have a six-year-old daughter, Bellamie – so Christmas begins around the end of April! We normally get the tree and decorate it around December 7th or 8th.

Real or fake tree?
Totally fake, yet totally realistic. It’s about 9ft-high and folds out into this majestic hulk of green foliage – but it’s the ‘fake news’ of trees.

Best Christmas memory?
The smell of pine needles as I open a flimsy wrapper which reveals a silver gun and leather holster with real ‘ammunition’ – those caps that let off that whiff of smoke after firing.

Tell us about your average Christmas Day
We go away, so it’s normally in the sun! So a swim in the sea and a couple of smug photos sent home. Tony Fenton used to call them the ‘texts of jealousy’.

What Christmas song could you happily never hear ever again?
None, really. I’m a bit nostalgic and soppy and sentimental, so I like them all. Judy Garland’s Have Yourself a Merry Little Christmas is beautiful and sad. Last Christmas by George Michael means it’s Christmas.

Best and worst Christmas films?
I love It’s A Wonderful Life. Elf. Trading Places is sublime. Cary Grant is the best ever angel in The Bishop’s Wife. But I loathe Love, Actually; I may be sentimental, but I’m not a complete sap.

What Christmas TV programme will you set to record?
I’d give the Morecambe & Wise special a gander, for old times’ sake.

Which of your Gift Grub characters would you invite to Christmas dinner?
Michael D Higgins (for the post-turkey political discussion), Jurgen Klopp (‘This is our season’ conversation) and Roy Keane. There’s usually an argument in our house at Christmas, so we might need someone to start one if it doesn’t look like it’s happening.

What’s the most irritating thing about Christmas?
Fake bonhomie. It’s a really sad time for many people, and constantly seeing people ‘putting on a face’ is jarring.

Who’s on your naughty list and your nice list this year?
Trump and Boris on the naughty list. Mo Salah and Roberto Firmino on the nice.