Marian Keyes: ‘I don’t want to be remembered after I die’

The writer talks about the man who made her cry, why Danny DeVito would play her in the film of her life, and why she regrets getting married in a church 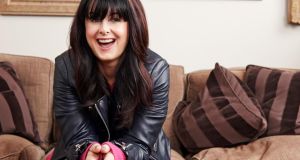 Marian Keyes: “We are only here for a nanosecond. All we are is dust on the breeze”

Marian Keyes was born in Limerick and lives in Dublin. She is one of the most successful Irish novelists of all time. Her books, which include Watermelon, Rachel’s Holiday, This Charming Man, The Mystery of Mercy Close, Saved by Cake and The Woman Who Stole My Life, have sold more than 20 million copies worldwide. When she is not writing, reading or upcycling furniture – known in Keyes parlance as “banjoing” – she can be found on Twitter interacting with her 100,000-plus followers. Her new book, Making it Up as I Go Along, is a hugely entertaining collection of nonfiction essays. She lives in Dún Laoghaire with her husband, Tony Baines.

I was 2½. Myself and my mother were in the kitchen and I was in this high chair that was also a car. She was taking down a holy plate off the wall, and the chip pan went on fire. I associated the two events: that she had interfered with God in some way and that we were being mildly smited. I remember her standing at the hob, smiling. I realise now she was smiling to keep me from panicking. She was very calm in the face of the terrifying chip-pan burning.

The trait I inherited from my mother is . . .

The ability to tell a story. My mam, Mary, is a really good storyteller. She understands about pacing and language and unexpected juxtaposition: the mild swear at an unexpected point and the laughs that can generate. The detail she goes into. She goes into Guiney’s and goes home with a blouse and makes it interesting. I see it in my sister Catriona, who is gifted that way too.

The trait I inherited from my father is . . .

The ability to work hard. My dad, Ted, came from a very humble background in Limerick city. He got a scholarship to go to secondary school and became an accountant, which was not expected. His mother wanted him to work in a shoe shop.

My father has Alzheimer’s, and I knew very early on something was wrong with him. Nobody, including his GP, would listen to me. I used to be enraged and so frustrated by my helplessness. But I’ve gone way past the rage, and funnily enough I feel such tenderness towards him now. I spend every Monday morning with him. He is very sweet and loving, far sweeter than he used to be when he was compos mentis. He always asks my mother to marry him and he always tells me I am beautiful, and he never did that when he was right in the head. We have connected in a different way since he got ill. I feel huge tenderness and love for him and a desire to mind him. He gets scared. He keeps wanting to go home. I can see how horribly dislocating this feeling is for him and I want to make that fear as small as possible for him. I just feel glad that I have the time with him that I do.

Takes over the role of Dad. I am the one who starts roaring and shouting that we’ll be late. I am such a control freak. I micro- manage everyone. I’m the oldest, so I was prematurely burdened. Now that Dad’s not really there to do it, I do it instead.

[My husband] Tony and I are regarded as the parents. We went on a family holiday to Italy recently, and people would come to us to mediate on scraps and ask “when are we going to the shops?” and “where are we going for dinner?” I am very comfortable in that role. It makes me narky but I’d hate to have the control taken away from me.

In London a few months ago. I am not usually a crier. I went to cross the road and there was a cyclist and he shouted and swore at me: “Why don’t you look the f*** where you are going?” As I get older, swearing affects me more. And the worst of it was if somebody does something like that to me I want to get into a row, but he had cycled away and I couldn’t even shout back. All I’d done was try to cross the road. I went home to Tony and cried hot tears of rage. I was left with all this woundedness and a deep sense of injustice.

I am phenomenally lazy. It’s those two hours in the morning I spend on the internet before I do any work. I just don’t want to do anything that’s hard. I am the laziest person I know. I am often in the grip of an obsession, but I am not at the moment and that is kind of worrying. It feels like I am wide open. Anything could just arrive and take up home in me. I am hoping it’s an obsession with running but it won’t be.

If there was a guidebook everybody was handed at birth, the most important advice would be . . .

That everyone else is faking it too; everyone is finding it as hard as you are.

I think I am kind. I feel compassion and want to help. I think that’s real. I have such a dysfunctional relationship with myself that it’s hard to find any good, but I think the kindness is real.

I am a gifted grudge-holder. I still push that cyclist off his bike in my head. I know it’s not good to nurture grudges, but I do.

That I got married in a church. I really, really, really wish I hadn’t. I was a lot younger then, well 32, old enough to know better. I was so caught up in the whole white wedding thing I really think we could have made a lovely commitment to each other without having to involve that organisation. I wish I hadn’t but we live and learn.

The person who would play me in the movie of my life is . . .

Danny DeVito. You know the way you read people who are asked that question and they say Charlize Theron or something? I always think: I used to like you and now I’ve really gone off you.

My dream dinner-party guests, living or dead, would be . . .

All my family. Louise Moore, my publisher. Suzanne Benson, my sister from another mister. Pasha off Strictly Come Dancing, not just because he’s beautiful but he’s good company and interesting. I’d have Tom Dunne [the former lead singer of Something Happens and Today FM presenter]. I’d definitely have Tom. All my friends. Posh Kate. Posh Malcolm. My granny, Katie Cotter.

A massive, massive bread basket. Just so much bread. I would have, oh, you know those cheese and bacon breads, Guinness bread, Parmesan cheese bread, blue-cheese bread and a huge portion of triple-cooked chips with tons of salt. I’d also have a whole chocolate cheesecake all for myself, and a vat of Percy Pigs.

Kind of feeling under the radar. That people don’t expect as much from me. The things that used to worry me when I was younger really don’t as much. It feels like the pressure is off.

The almighty craic and the recommendations for telly, books and other cultural things. It’s very handy. I also love the sense of community. I am on it for my own personal pleasure.

A lot of people are balls of rage waiting for a reason to explode.

My biggest achievement is . . .

Learning to drive and getting sober. I haven’t had a drink in 22 years. Not a drop.

The people. How we talk. Our conversations. Even a small exchange in a newsagents. I think we are a nation of poets. I know it sounds like a cliche but I mean it.

What I would change about Ireland is . . .

The eighth amendment has to go. However, if it goes, the 1861 Offences Against the Person Act is still on the books; relegislating will be challenging, but that conversation can’t begin in a meaningful way until the eighth is repealed.

Brilliant. I am delighted with them. I don’t understand people who give out about them. But I have to say we’ve had 100 years and now it’s time for us to grow up. We are going to have to be adult in our attitude to women having abortions. Irish women, Irish couples, they have abortions. It’s real and it’s an uncomfortable truth for people, an inconvenient truth and we can’t keep doing that thing that children do: putting their hands over their eyes and thinking nobody can see them. We’ve got to be adult and grasp that particular nettle. It’s time.