Madeleine Lebeau: The face of La Marseillaise in Casablanca

Obituary: ‘She was a free woman who lived by her own rules’ 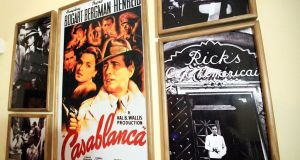 Madeleine Lebeau: “It wasn’t that I was cut out, it was because they kept changing the script, and each time they changed it, I had less of a part.” Photograph: Adalberto Roque/AFP/Getty Images

Madeleine Lebeau, a French actress who attained movie immortality with one scene, when the camera zoomed in on her tear-stained face as she sang La Marseillaise in Casablanca, has died in Estepona, Spain. She was 92.

Lebeau was 19 when she was cast in Casablanca as Yvonne, the spurned girlfriend of Rick Blaine, the owner of Rick’s Café Américain, played by Humphrey Bogart.

In one of the film’s pivotal scenes, Nazi officers in the cafe begin singing the patriotic song Watch on the Rhine, whereupon the Czech resistance leader Victor Laszlo, played by Paul Henreid, orders the house band to strike up the French national anthem.

One by one, the bar’s patrons rise and join in, drowning out the Germans. As the song nears its stirring finale, the camera closes in on Yvonne, her face lit with patriotic fervour, tears streaming from her eyes as she sings. At the song’s conclusion, the camera swings toward her again as she shouts a defiant “Vive la France! Vive la démocratie!”

“She was a free woman who lived by her own rules, totally inhabiting the roles entrusted to her by leading directors,” the French culture minister, Audrey Azoulay, said of Lebeau. “She will forever be the face of French resistance.”

Marie Madeleine Berthe Lebeau was born on June 10th, 1923, in Antony, a suburb of Paris. She had an uncredited role as a student in the GW Pabst film Young Girls in Trouble (1939) before fleeing France ahead of the German advance with her husband, Marcel Dalio. Dalio, who was Jewish, was known throughout France for his performances in The Rules of the Game, Grand Illusion and Pépé le Moko.

After Lebeau appeared in a minor role in Hold Back the Dawn (1941), with Olivia de Havilland and Charles Boyer, she signed a contract with Warner Bros, which spelled her last name LeBeau in credits.

She played Anna Held, the wife of Florenz Ziegfeld, in Gentleman Jim, with Errol Flynn as the boxer James J Corbett, before filming Casablanca, in which her husband played Emil, the croupier. The couple divorced shortly after the film was made.

She made two more films in the United States, the Resistance drama Paris After Dark (1943) and the musical comedy Music for Millions (1944). She also appeared on Broadway in the comedy The French Touch, directed by René Clair, before returning to France, where she worked steadily through the 1950s.

She appeared as a nightclub singer in the Ealing Studios film Cage of Gold (1950) and a scheming prostitute in the comedy-drama Sins of Paris (1951). She was the pharmacist Adrienne Terreau in The Country I Come From (1956), directed by Marcel Carné, and the mistress of the man being pursued by Brigitte Bardot in La Parisienne (1957). In Federico Fellini’s 8 1/2 (1963), she played a French actress named Madeleine, one of the former loves of Guido Anselmi (Marcello Mastroianni).

Her last turn before the cameras came in the French television series Hello, Police in 1969 and 1970.

In the mid-1960s Lebeau left Paris for Rome, where she married Italian screenwriter Tullio Pinelli. He died in 2009. She is survived by a daughter, Maria Duhour Gil.

For a long time, she regarded her luminous performance in Casablanca with mixed feelings. It was too small.

“It wasn’t that I was cut out, it was because they kept changing the script, and each time they changed it, I had less of a part,” she told Charlotte Chandler, the author of Ingrid, a biography about the Casablanca co-star Ingrid Bergman, in the 1990s. “It was not personal, but I was so disappointed.” She added, “Now I’m thrilled to have been part of Casablanca.”

She is survived by a daughter, Maria Duhour Gil.

I would say to anyone thinking of returning to Ireland: look beyond Dublin
2

Why talking to strangers is good for you
7

What can €120k buy you in Italy, Greece, Cyprus, Lithuania and Louth?
8

Food myths busted: Are coffee and salt so bad for us? Are calorie counts worthwhile?
9