You can’t win: if you’re a martyr to keeping your family happy no matter what, you lose your dignity; if you’re a harridan who ‘nags’, you risk alienating everyone 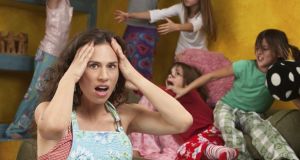 There’s a baby boom in the neighbourhood. Fit young mothers are pushing prams everywhere you look. They walk fast. Sometimes they run with the pram at high speed in their Lycra sports leggings.

The babies and young toddlers in the prams are gorgeous, almost like accessories to be shown off in between Pilates and yoga classes. It’s a beautiful time in life.

I want to say to them “just you wait”. That cuddly little child is going to grow up to blame you for everything. The terrible twos are nothing compared to the terrible 20s. If there is one rule in family life that never changes, it’s this: it’s all Mother’s fault.

Psychiatry has sought to prove this over and over again. And while blaming the mother for schizophrenia (RD Laing), homosexuality (the old diagnostic and statistical manual) and anxiety due to “attachment disorder” (John Bowlby) , have all been debunked, the blame lingers.

When new mothers emerge from childbirth, you can almost see it written on their foreheads: “martyr” in some cases, “harridan” in others. If you’re a martyr to keeping your family happy no matter what, you lose your dignity. If you’re a harridan who “nags” and marshals the family into what looks like a happy family, you risk alienating everyone.

No matter which is the case, when things go wrong it’s Mother’s fault. That’s why marriage makes women more vulnerable to emotional distress. As Daniel and Jason Freeman write in their book, The Stressed Sex: Uncovering the Truth about Men, Women and Mental Health, married women are more likely to suffer from insomnia, pressure to be thin, depression and anxiety.

The pressure to be a good mother is immense. You can try to be a “good enough mother” but will you ever really be good enough?

This is what I also want to say to the gorgeous pram pushers: “Be selfish. Give yourself time to be yourself. Don’t lose your identity in child-rearing because no one but you is going to appreciate it.”

Motherhood is tough, and in Europe women are turning away from it. Ireland and France are the only countries not experiencing a decline in birth rates. In Germany, with its high standard of living and robust supports for families, such as childcare and generous parental leave, women are running away from motherhood. The average number of children a woman has is 1.38.

Young women are delaying childbearing until their 30s, even their 40s. I had my last at 40, but I wouldn’t recommend it. The longer you wait, the greater the risk of infertility. Research has found that by 44, it is almost impossible to get pregnant without someone else’s eggs.

No one knows why Ireland has bucked the trend and continues to produce babies, even though the supports for parents in Ireland are among the worst in Europe. We’ve been through punishing austerity and yet we’re still having babies. We’re having more babies than in Sweden, which has five-star supports for parents, and Spain.

Irish women are martyrs to the cause. We accept being blamed for everything.

One in five Irish women has experienced domestic violence, usually by a husband or ex-partner. Women’s Aid, which produced these statistics, points to a “victim-blaming culture”. They say that women experiencing domestic abuse have to face deeply embedded myths in society. Women are blamed for the abuse, which isolates them and makes them feel too ashamed to talk about it. I would like to think that all those fit young mothers with their expensive prams aren’t experiencing this.

My advice to these young mothers? Look after yourself. Don’t make motherhood the only source of your identity. Those kids are going to fly one day and you will help them to soar. Make sure that you soar too.