Life and death: the Rotunda and the Rising

Women dodged bullets during Easter week 1916 to walk to the Rotunda to give birth. An exhibition tells the remarkable stories of five women linked to the hospital 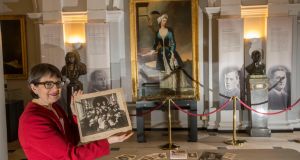 The Rotunda’s chief librarian Anne O’Byrne prepares for the exhibition. “All of human life was here,” she says. Photograph: Dara Mac Dónaill 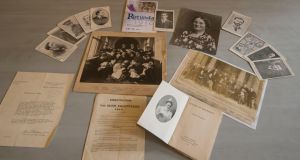 Artefacts from the exhibition The Rotunda: The Birth of a Nation, which will open on March 7th at the Rotunda Hospital, Dublin. Photograph: Dara Mac Dónaill

Easter Monday, 1916. As the bullets ricocheted between the pillars of the GPO on O’Connell Street, you could hear the screaming. No one had been shot, but blood was being spilled as the women of Dublin laboured before they gave birth in the Rotunda Hospital on Parnell Square.

“This is about birth and the people who survived. Women are giving birth as someone is shot two streets away, so it is both ends of life,” Sinéad McCoole, curatorial adviser to the Ireland 2016 centenary programme says.

The midwives, nurses and doctors carried on working right through the Rising, says Anne O’Byrne, chief librarian at the hospital, who is co-ordinating The Rotunda: The Birth of a Nation, an exhibition which is being opened, rather appropriately, by Sabina Higgins on Mothering Sunday, March 6th.

Tere were many deaths during the six days of the Rising as well: volunteers, policemen, British army personnel and civilians. Life and death also continued up in the Rotunda. Babies were born, and death made its mark. It is recorded that one mother died from empyema or pus in the lung. This was probably caused by the malnutrition and poverty that were a common feature in the lives of the women who lived with their children in Dublin’s packed tenements.

The battle was raging, and the streets were blocked and dangerous. How did women in labour make it to the Rotunda?

Records show that that “patients came up Moore Street or up from Capel Street despite the fighting”, says O’Byrne. Anyone who has ever been in labour will understand the women’s determination.

Forget about carriages or ambulances: most of the women made the journey to the hospital on foot, she says. “This was an open-opportunity hospital, and poverty still existed to a huge degree. Bartholomew Mosse, who founded the hospital in 1745, instilled the creed that the Rotunda cared for women regardless of rank or status, so the poor were treated here.”

The Rotunda’s position at the top of O’Connell Street gave it a unique view of the Rising, says McCoole.

“I think it is fascinating that the Rotunda was bang-slap in the middle of Dublin while it was going ahead. No one knew how long it was going to go on for. They were in their own little bubble and they just carried on.”

This is one of the main reasons why the Rotunda is perfectly placed to stage an exhibition about the Rising, says McCoole. “It is a rare opportunity for people to go into that Round Room at the Rotunda, and it is a beautiful space, a sort of hidden space in Dublin that doesn’t have its doors open often.”

There is no need to be pregnant to go in to the Rotunda on this occasion. This will definitely be one visit when you can just lie back and think of Ireland.

The Rotunda had no interest in religious denomination, either, says O’Byrne. “That ethos has never changed through the eras of care in the Rotunda. Religion didn’t matter. Protestant and Catholic were treated here. The women who were catered for in the Rotunda were from all classes, denominations and all economic strata. All of human life was here.”

Very poor women would probably have been attended to by midwives where they lived (or “on the district” as it was known).

Very rich women would have given birth in more salubrious surroundings in their own beautiful bedrooms. Women who needed blood transfusions, Caesareans or other types of surgical intervention would have had to come in to the hospital.

Not even bullets put off women who needed such care during the Easter Rising. And there were bullets.

One of the five women the Rotunda features in the exhibition, Mary O’Shea, would become a leading light in the Irish Countrywomen’s Association; when they were marking the 50th anniversary of the Rising in Abbeyleix, Co Laois, in 1966, she answered a call for people who had been caught up in the Rising. She had been a midwife in the Rotunda during the Rising and wrote a memoir of the time.

O’Shea wrote: “Here was I doing night duty as part of my training in the Rotunda Hospital. I had spent two years in France, saw the start of the 1914-18 War, enough to put me off wars forever. It was with great joy I returned to Ireland to peace, quiet and happiness.”

When she woke up on Easter Monday 1916, O’Shea noticed that “there was not a sound on the street and nobody seemed to be moving. The volunteers have taken over Dublin was the news.

“Soon there was noise enough, but not the placid everyday hum of ordinary movement. Shots and explosions were then the order of the day; we did our work, ate our short ration and slept when we could . . . By the end of the week we thought that most of the city had been blown into fragments. It looked as if we were in the centre of a huge bonfire which would close in on us eventually.

“The room in which I was with my patient was just over the Round Room; bullets began to hop off the casing of the windows. We were moved to a room in the middle of the building. This was better.

“We could not keep away from the window in spite of the warnings. We saw several people shot in trying to cross O’Connell Street. We saw snipers at work from the top of the houses of Parnell Square. We saw all the prisoners collected into the lawn in front of the hospital and marched away to prison. One, I think, was the Countess judging by the size of her small hands and feet.

“When things got quiet and we went out of doors, a terrible sight met our eyes. O’Connell Street in a shambles.

“Later I went to England to do my general training and came home from that into the Civil War, which was a thousand times worse. To think that lads who stood together against a common foe could split and be so bitter. This to me is the tragedy of our time.

“Easter Week 1916 seemed so unreal that now still it seems like a nightmare,” O’Shea concluded.

Along with O’Shea, the Rotunda exhibition features four other women – Dr Kathleen Lynn, Brigid Lyons Thornton, Albinia Brodrick and Dorothy Stopford Price – all of whom have a connection to the Rotunda Hospital.

From her position in City Hall garrison, Dr Kathleen Lynn was immersed in the Rising as chief medical officer with the Irish Citizen Army. She described herself as “a Red Cross doctor and a belligerent” to her arresting officer. She was deported but she returned.

Brigid Lyons Thornton was a veteran of the Rising who went on to volunteer in the library of the Rotunda. As a medical student, she gave first-aid assistance at Fr Mathew Hall and in the Four Courts. She was arrested for a short time and held in Kilmainham Gaol. She was the first female army officer in the Free State.

Albinia Brodrick did midwifery training at the Rotunda Hospital in 1905. Her father was the eighth viscount Midleton. McCoole points out that the 1905 census in England showed that Brodrick lived in London’s Belgravia, as did 15 servants. When she came to Ireland in 1905 she joined the Gaelic League and became know as Gobnait Ní Bhruadair. She would write about her visits to internment camps in 1916.

Dorothy Stopford Price’s maternal grandfather, Evory Kennedy, had been master of the Rotunda, and she followed in his footsteps, studying medicine at Trinity College Dublin. She was invited to spend the 1916 Easter holidays as a guest of the British undersecretary Sir Matthew Nathan in Phoenix Park. Later she would join Cumann na mBan and go “on the district” with the Rotunda as part of her medical training. She became a paediatrician with expertise in tuberculosis and was the first person to use the BCG vaccine in Ireland.

As McCoole points out, the women featured in the exhibition are remarkable.“The true characters are far more colourful and interesting that you ever imagined,” she says. “These women are pretty exceptional. There is so much happening across Europe – all the new opportunities – so you have someone like Albinia immigrating to Ireland because she sees poverty and poor people and wants to help them. It is like people go to Africa today.

Visitors will find out a lot at the exhibition. And they won’t need forceps, either, which should make for a much more pleasant trip.