One Dublin sauna attracts men who ‘can’t work the internet’. Another is popular with under-25s 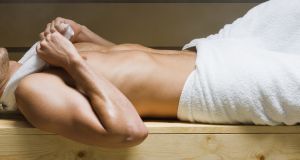 Gay saunas: once popular places to meet for sex, they have largely been replaced by hook-up apps such as Grindr. Photograph: Sean De Burca/Corbis/Getty

Dating and hook-up apps such as Grindr may have changed its dating scene, but one aspect of gay culture remains largely unchanged: its saunas.

Ireland has had gay saunas since at least the 1980s, although they’re rarely talked about in the mainstream media, or even in the LGBTQ+ community. Dublin is home to two of them: the Boilerhouse and the Dock, places where huge numbers of gay and bisexual men of all ages, forgoing smartphone technology, still go to have sex.

Kevin, who is 32, has been going to the Boilerhouse several times a year since 2012. He came out in 2010, and he says the sauna gave him a unique opportunity to have anonymous and frequent sex with multiple partners. His experience has been overwhelmingly positive, he says.

“It’s an alternative to getting sex from apps or websites, or the old-fashioned way of going to a gay bar. I would go there mainly for sex but also because you somehow get an enjoyment out of it. I went there on New Year’s Eve and had a fantastic time. Normally I go to the Outhouse, which is a local LGBT community centre, on a Friday, and if I want sex badly I will go to the George for a bit of alcohol, or any gay bar. After that I end the night on a high.”

Saunas have a reputation for being used mostly by older men, but Kevin says this has changed. “When I first went there I thought I was the youngest. Some people did warn me in advance that it was a bunch of old men, but I said to myself, ‘I’m just going to go and see what the story is.’ Back in those days it was a bit of an older gentleman’s place. But these days it’s more my age. I went there on my birthday last year, and the lads were about 18 or 19. The age range is from about 18 upwards. The eldest, from what I recall, would be in their late 70s.”

But while the younger men are often openly gay, Kevin says, many older men are “very strict on privacy” and are often closeted. “There are other men who are married to their wives, and of course they’re leading double lives. I’ve met some men who are like that. One would be a gay life and the other would be straight. It’s sad, but that’s the way their lives are.

“I met a guy a few years ago who said he was actually very happy in his marriage, but at the same time he was still closeted. He said, ‘If I told my wife I’m gay I’d lose everything.’ He is missing out in terms of his own personal life. He can’t be who he is. He’s technically cheating constantly, all the time, which is kind of sad.”

Michael Campbell, who owns the Dock, says that his venue is used mostly by older men. “You don’t get many young guys. Most people who come here would be over 60, and I would think that’s probably because they can’t use the internet.”

He adds that he believes gay saunas are on their way out. “I think the internet probably killed them. We would only get five visitors a day, and at the weekend we might get maybe 15. [It] would be quite empty. It wouldn’t be the hive of the gay community.

“To be honest, if I had my way, I would probably close it. I think they died a death. And I think the Boilerhouse probably has a total monopoly. They probably get 95 or 97 per cent of all the trade.”

Despite the Dock’s lack of success in recent years the sauna still seems to have a significance for older men, many of whom are not openly gay. Campbell says that a lot of the men who go to the sauna are “very secretive” about their sexuality, and the sauna provides the anonymity they want.

Mark, who is 48, and also goes to saunas abroad, agrees that the Dock tends to be visited mainly by older men. But this is its appeal for him; he says the Boilerhouse is “full of 18- to 25-year-olds that think they’re God’s gift to mankind”. “They don’t talk to you,” he says, “so once you’re over 30 you’re past it as far as they’re concerned.”

The Dock is a home away from home for Mark: an intimate, comfortable place to meet other men. “It’s kind of a community. The Dock sauna has people who come in at the weekend and come up from down the country. In that respect it’s good.”

Like Kevin, Mark says that a lot of the men he encounters in saunas, particularly at weekends, are closeted. They will only go at night, often when their partners are away, for cheap and anonymous sex.

Michael estimates that Dublin has as many as a dozen cinemas operating in adult shops. They offer a similar opportunity to saunas, he says, but for a lower price. “I’d rather go to a cinema than a sauna. A sauna is a very personal thing, with your clothes off.”

Michael says that saunas have offered something important to gay men, both open and closeted, in recent years – but he too accepts that they won’t be around for much longer. “The biggest sauna in Europe has closed down,” he says. “Maybe that’s an indication of where they’re going.”

Expert tips: A physiotherapist on those staying at home
5