Kathy Sheridan: The people have spoken – straight from the heart

Are you proud to be Irish? Do you feel valued and cherished, as envisioned in the 1916 Proclamation? The Census of the Heart asks if we're living up to our promises 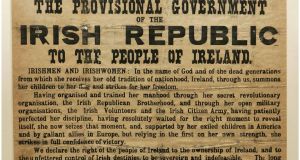 Copy of the 1916 Proclamation: when a 30-year-old female writes in Census of the Heart that she feels neither valued nor cherished, would the signatories be surprised? Photograph: Dara Mac Dónaill

Do you feel cherished ? Not by your dog or your mother but as one of those children of the nation to be cherished equally, as envisioned in the 1916 Proclamation? Do you feel empowered? Are you proud to be Irish? The vision of the 1916 signatories was marvellously broad, a shape-shifting weapon with which to thrash modern politicians for inequality of every description.

So ,when a 30-year-old female writes in Census of the Heart [COTH] that she feels neither valued nor cherished “by the wider Irish society, and I long to live elsewhere”, would the signatories be surprised? For many Irish women, the feeling of being bossed by the Eighth amendment and its followers speaks to their sense of female autonomy on this island.

Then again, part of the conundrum of the 1916 vision is just how far the male signatories would have travelled with it into modern Ireland. Would they have been for or against the Eighth amendment? Would they agree that some of the great forgers of equality have included the contraceptive pill, for example, or a slew of EU directives, or marriage equality? Would they be gratified that, in COTH, more than one in 100 respondents feel empowered enough to identify as “other” in the gender classifications? Who knows? So, do people of the COTH feel cherished in general?

Under a third do and another third has no strong feeling about it one way or the other so, on balance, that result is more positive than your average battered politician might have expected. But consider one response from a parent : “For me and my young family it’s a treadmill. Working hard to only pay bills. No money, time or energy left over for joy”.

The same poignant image was summoned up by the third of respondents who chose the word “overwhelmed” when asked about their emotional state, a word that encompasses a sense of modern life as too stressful, too insecure, too fast-moving, too demanding, too globalised.

Life in 1916 was profoundly stressful, too, but that a third of Irish people in 2016 should feel overwhelmed hardly bodes well for the modern nation’s health or resilience. And still, when asked now, the happy people well outweigh the unhappy, which has been the happy way in surveys over several decades.

But it is the considered, generous, written responses to COTH, rather than the statistics, that make it distinctive. The 1916 leaders would recognise much of the language, for good or ill. Asked about the ability to fulfil their potential in daily life, one respondent writes : “On local community level, Irish people are kind and helpful.

“However, we are cowardly, greedy and short-sighted when it comes to our vision for our country. Probably due to our colonial history and recent poverty, it feels like we have far to go be able to vote/govern our country with courage and integrity.”

And another : “It’s a time of great change now. In one way we have huge positive change and are finally taking full responsibility for our nation. On another level, we are still blaming the past and talking like victims...” Of course, there is no shortage of scorching criticism – of “money hungry” and/or “corrupt” politicians, of a society “that knows the price of everything and the value of nothing”, one “where our egos are bigger than our hearts”.

And still, it seems, many people do feel cherished and proud to think of this country as home. Indeed all ethnic groups lean towards pride in Ireland as their home, with the exception of Irish Travellers. We are even tentatively hopeful.

As one respondent writes : “Ireland in 2016 is remembering 1916 and the birth of our nation. We are rediscovering through remembering how our nation was born and who we are. We are emerging from a dark recession. I hope that we are learning from our mistakes in the past regarding the treatment of the vulnerable members of our society”.