Jennifer O’Connell: Being an adult does not mean being stressed and anxious all the time

When it comes to a work culture, give me Paris over Palo Alto any day 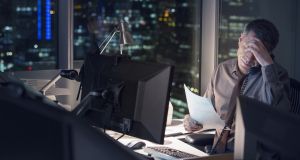 “It’s worth reminding ourselves, daily if necessary, that being an adult does not mean being stressed and anxious all the time.”

On the same day that a new law was implemented in France, giving workers the right to disconnect from their work emails after hours, the Wall Street Journal retweeted a link to an article from last summer.

The article was entitled “Why 4am is the most productive hour”. In breathless terms, it cited the Apple chief executive Tim Cook, whose day legendarily starts at 3.45am, and featured executives who brag about sleeping in their gym clothes, and putting their runners on within seconds of waking up, to prevent the unthinkable – falling back to sleep. One man explained how a 4am start gives him the time to clear his emails, go for a run and possibly even make his daughter an omelette.

I lived and worked in Silicon Valley, the stress capital of the world, for two years. The work culture, with its performance reviews, its 18-hour workdays, its emphasis on move-up-or-move-out, is engineered to turn employees into nervy, high-performing ponies. I heard executives boast about how little sleep they get, how they never eat lunch.

The language of the office is the language of the emergency services, not the jargon of pampered executives with on-site gyms and free massages. It’s all about “fighting fires” and “talking her down off the ledge” and “drinking from a firehose”.

As obedient executives, my husband and I both were horrendously stressed. Our conversations mostly consisted of arguments about who could get away with leaving the office early enough to pick the kids up before their daycare closed; who could make the first, mad dash to their laptop at 8pm to fight whatever fire had begun smouldering during dinner.

Give me the Paris approach over the Palo Alto one any day.

The new French law is not a ban on answering out-of-hours email. Instead, it gives employees the right to occasionally draw the line when their employer’s demands intrude on evenings at home, holiday time or Sundays. “The boundary between professional and personal life has become tenuous,” the French labour minister, Myriam El Khomri, said.

The brilliant part about the new law is, I think, that it reveals the great stress lie for the damaging conspiracy it is. It’s worth reminding ourselves, daily if necessary, that being an adult does not mean being stressed and anxious all the time.

Anxiety has been a constant throughout my adult life, like an unwelcome relative who turned up uninvited, gatecrashing the party at exactly the wrong moment, and leaving me shaking and disoriented in its wake. As I got older, I learned approaches to batten down the hatches in anticipation of its arrival. And then I encountered stress. Stress was anxiety’s more persistent, more toxic spouse – less likely to ruin the party by hyperventilating into a paper bag on the sofa or vomiting all over the bathroom, more likely to take up permanent lodging in the spare room, bellowing insults and threats through the bedroom wall at 4am.

But stress, as I have recently discovered, should be a temporary, manageable response to a challenging situation. It is not an inescapable fact of adult life.

Yes, there are unavoidable stresses: bereavement, money worries, changing job, losing job, negative equity, illness, heartbreak, divorce. Some of them I’ve got to know personally. And yes, some people suffer from crippling anxiety disorders that are not so easily evicted. But stress should not be what it has become for so many of us – a state in which we are permanently, uselessly floundering in a sea of cortisol and caffeine. In the midst of the turmoil of last summer, when my husband and I were deciding whether to return to our high-stress, high-income Silicon Valley lives or to start over again in Ireland with no home of our own and lots of ideas, but no immediate prospect of income, I came across a scrap of a poem by Seamus Heaney – lines now saved as the screensaver on my laptop:

Nothing magnificent, nothing unknown.

A gazing out from far away, alone.

And it is not particular at all: Just old truth dawning: there is no next-time-round.

To spend your one and only life like a hamster on a wheel, running faster and faster just to stay on, would be a terrible waste. There are no prizes for being the busiest, the one who manages to inflict the highest degree of stress-induced cellular damage on their body in the shortest amount of time. Chronic stress is not a natural condition. Stress and insomnia are precursors to many significant illnesses, from depression to Alzheimer’s.

It’s been eight months since we came back; six since we knew we’d be staying. The stress was not evicted overnight. It is still there, just beyond the bedroom wall; sometimes waking me at 4am, yelling to-do lists. But it is on the retreat, ushered along by walks on the cliffs, time with friends and family, Sunday nights miraculously free of dread or work emails.

Heaney knew the wonder of a life that was not magnificent, not extraordinary, but simply filled with the oldest truth of all: there is no next-time-round.