Intellectual force in the church who abhorred violence 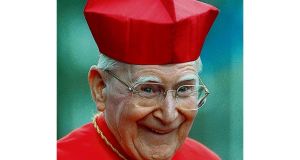 Cardinal Cahal Daly: he presided over the Irish church's most testing and difficult period in the last century

Cardinal Cahal Daly:CARDINAL CAHAL Daly, the former Archbishop of Armagh and Primate of All Ireland, who has died aged 92, was one of the Catholic Church’s most outspoken critics of political violence in Northern Ireland.

In 1969, with the outbreak of violence in the North, he took up a theme which would dominate the rest of his career – political violence in Ireland. In his 1972 New Year’s Day address, he urged a more balanced reading of history, allowing greater justice to the contribution to Irish freedom and democracy of peaceful, constitutional movements.

In May that year, he emphasised the impossibility of coercing nearly a million Northern Ireland unionists into a united Ireland. In August, he said British and world opinion was sickened by the ruthlessness and intransigence of the IRA’s campaign. Such forthright denunciations were to make him something of a hate figure among republicans over the next quarter of a century.

Born in Loughguile, on the edge of the Glens of Antrim, in 1917, he was the third of seven children.

His father, Charles, a primary schoolteacher, came from Co Roscommon; his mother Susan was from Co Antrim. He was educated at the local national school and at St Malachy’s College, Belfast, where novelist Brian Moore was a contemporary. He took a classics degree at Queen’s University before going to St Patrick’s College Maynooth. He was ordained in June 1941, for the diocese of Down and Connor.

In 1945, he received a doctorate in divinity from Maynooth and did postgraduate studies in philosophy at the Institut Catholique in Paris. He had a lifelong affection for France and spent most of his holidays there.

Back in Belfast he became classics master at St Malachy’s before being appointed lecturer in scholastic philosophy at Queens University in 1946. He remained there for 21 years.

In the early 1960s he attended the second Vatican Council as adviser to Bishop Philbin of Down and Connor, then as theologian to Cardinal Conway, the Catholic primate. Soon he had established himself as an authority on Vatican II and as one of the Irish churchs foremost intellectuals.

In 1967, he was appointed Bishop of Ardagh and Clonmacnoise. He became one of the hierarchy’s most outspoken members on subjects as varied as emigration, industrial disputes, socialism, abortion, education and the gap between rich and poor. He was strictly orthodox on socio-sexual questions. He rejected arguments for removing the constitutional prohibition on divorce and opposed change in the law on contraceptives in the Republic.

An important strand in his career was his emphasis on ecumenical dialogue. In 1976, he was co-chairman, with former Methodist president Dr Eric Gallagher, of the inter-church working party which produced the report Violence in Ireland. However, he spoke with the voice of Catholic conservatism when he restated, firmly, the church’s opposition to women priests at the Lambeth Conference in 1978.

During this period, it became clear that Dr Daly was the intellectual force behind and often author of the Irish bishops’ more important statements. Many believe he wrote the pope’s appeal to IRA members to lay down their arms during the papal Mass at Drogheda in 1979.

In February 1982, he had a heart attack, but it did not prevent his appointment that year as successor to Bishop Philbin in Down and Connor, one of the church’s most demanding dioceses. It includes most of Belfast.

His most publicised political intervention was in 1984 when he presented the hierarchy’s submission to the New Ireland Forum. He said the bishops did not seek “a Catholic state for a Catholic people”, but re-emphasised their opposition to divorce and rejection of joint schooling in the North.

In December 1990, he became Archbishop of Armagh and Primate of All Ireland. At 73, he was the oldest Catholic primate for 170 years and only two years away from the retiring age for bishops.

In June 1991, he was made a cardinal. He presided over the Irish church’s most testing and difficult period in the last century. There was the peace process and IRA ceasefire in the North, and a series of clerical sex scandals, including the resignation of Bishop Eamon Casey in 1992.

In December 1993, he told British parliamentarians that for the first time in 20 years, a realistic peace was attainable in the North. The following August, his intelligence sources once again appeared superior to that of the politicians when, on the eve of the IRA ceasefire, he said the goal of taking the gun out of Irish politics “may now be very near”.

In January 1995, he was the first Irish Catholic leader to speak from the pulpit of Canterbury Cathedral since the Reformation. He asked the British people for forgiveness for the hurts inflicted upon them by the Irish. But Drumcree that year tested him to the limit and his frustration was evident after the failure of church leaders to mediate a solution to the stand-off.

Using the language of anger and betrayal – very unusual for him – he said the decision to force the parade down the Garvaghy Road had “totally shattered” mutual trust and confidence between Catholics and the RUC.

Meanwhile, the Irish church itself was experiencing its deepest crisis of the century, beginning with the resignation of Dr Casey following revelations that he had a teenage son in the US. It was a bombshell to Dr Daly who knew nothing about the matter until days before the story broke.

Then in 1994 came the conviction of Norbertine priest Fr Brendan Smyth on charges of sexually abusing children over 24 years and revelations that the head of his order had known about it for a long time.

At Maynooth in November 1994, Cardinal Daly said he did not remember in his lifetime “a more painful, a more worrying and distressing time”. He publicly apologised and expressed his distress and horror at the crimes of a small number of priests.

“There will be no cover-up, there will be no cult of secrecy”, he said in January 1996 when he introduced the report of the Catholic Bishops’ Advisory Committee report on child sexual abuse by priests and religious.

The summer of 1995 saw another blow to the traditionally monolithic moral authority of the Catholic bishops with an unprecedented public clash between Dr Daly and Bishop Brendan Comiskey of Ferns over clerical celibacy.

For many Irish people, though, their last vivid memory of Cardinal Daly will have been his appearance on a Late Late Show devoted to the problems of the Catholic Church in November 1995. He was defensive if courageous but appeared to be out of touch with an audience which occasionally heckled and hissed him.

In November 1996, he retired to Belfast, spending his latter days reading and writing occasional newspaper articles, including for The Irish Times, and more substantial philosophical works.

Although it was announced that he would attend the funeral of Pope John Paul II, on medical advice he did not travel to Rome. As he had turned 80 in 1997, he was ineligible to take part in the 2005 conclave that elected Pope Benedict XVI.

At the height of the recent economic boom in 2004, he condemned tax evasion by some of the State’s wealthiest citizens as “one of the great scandals in modern Ireland”. In December 2008, as the recession took hold, he urged people not to turn a blind eye to the suffering of others and said the crisis had taught that people could not put their faith in money.

Last November, he described the Murphy report into clerical sexual abuse in the Dublin archdiocese as “almost beyond belief”.

His books include The Price of Peace (1991), Moral Philosophy in Britain (1996) and Philosophical Papers (2006). In 2001 he donated the complete collection of his sermons, essays, addresses and press statements to the Linen Hall Library in Belfast.

He may once have been the country’s most recognised churchman, but few knew the private man at all, even colleagues. His idea of relaxation was a serious intellectual conversation or to settle down with a book of philosophy, poetry or a novel by Dostoyevsky or John McGahern. He ate little and kept to a regime of boiled chicken and fruit, as prescribed in the early 1980s.

“Cahal’s a bit of an ould saint,” a former archbishop has been quoted as saying. It would have been a fairly widespread view.