Iftas close to crisis: how long can the show go on?

Industry frustration with the Irish Film and Television Awards is growing. Complaints include the high cost of attending, the chaotic categories – and the quality of wine 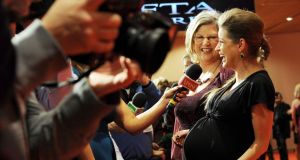 ‘Last year, when Amy Huberman was pregnant on the red carpet, we ran four pages on that story,’ says the editor of VIP magazine

‘It’s a huge event in the social diary,” says Martha Connolly, the new editor of VIP magazine. “Last year, when Amy Huberman was pregnant on the red carpet, we ran four pages on that story. And 10 pages on Ifta style.”

VIP knows what it is doing. But every year the rest of the viewing public, no matter how much we enjoy the show, are left wondering: what – and who – are the Iftas for? Over the past decade they have become something of a mystery drama in their own right.

Tomorrow night, the 11th annual Irish Film and Television Awards will be broadcast on RTÉ1. The President, Michael D Higgins, is due to be presented with an honorary award for his outstanding contribution to the Irish film and television industries. The broadcast, which will consist of edited highlights of the awards ceremony, will start at 9.45pm – and continue for more than two hours of prime-time television from a new venue, the DoubleTree hotel (formerly the Burlington). One of the sponsors is a champagne brand.

The Iftas are so important to VIP that it delays going to press until they are over. But VIP may be unique in its unalloyed enthusiasm for the awards. After more than a decade of trying to fulfil a remarkable range of functions – glitzy entertainment programme; showcase for Irish media talent; morale-booster for a nascent film industry; vindication for home-grown television production in the face of tough international competition; all while existing as a viable commercial organisation – it seems the Iftas have this year come close to crisis.

For one thing, they are being broadcast almost eight weeks late. Last year’s ceremony was transmitted on February 9th. Viewing figures are strong, with a consolidated average audience figure of 591,800 – similar, according to an RTÉ spokesperson, to that of “a strong Late Late , or The Voice of Ireland finals”.

The Iftas have traditionally been firmly scheduled in the international awards season, among the Oscars and the Baftas. Indeed, many believe that the Iftas were placed at that time to avail of international talent while it was nearby, attending the Baftas in London. The organisers of the Iftas did not respond to Irish Times inquiries about the reason for this later transmission date. According to the same spokesperson, the organisers of the Iftas, Áine Moriarty and Deirdre Hopkins, “came to us and asked us to delay it. We were surprised at that.”


No country for big awards
Of course, any awards system is the centre of rumours and criticism, and the film and television industries are not known for compassionate views on anything. Several people make the point that winning an award is always pleasant and often very useful.

But there is a feeling that the Iftas are trying to be too big an event for such a small country, and that they probably occur too often to maintain the glamour they aim for. When he was leaving as head of the Irish Film Board in 2011, the senior film executive Simon Perry, in a humorous speech, named his failure to cancel the Iftas as one of his regrets about his time here.

Then there are the worries about the criteria used to judge entries for the awards, which industry insiders say have never been really clear. Frustration with the awards has been building. For example, this year the television production company Screentime Shinawil, producer of hit programmes such as Dragon s’ Den , MasterChef Ireland , The Apprentice and The Voice of Ireland , did not even submit its programmes to the competition.

And BBC Northern Ireland told us, perhaps pointedly, that it, “like other broadcasters, will have made a payment for its entries to this year’s Ifta awards. A further payment will also be required for any additional BBC nominees attending the awards ceremony.” The BBC will not broadcast the Iftas this year, and hasn’t done so since 2009.

This is striking, given that the awards, when founded, were remarkable for rewarding film and television production north and south of the Border. At the time of going to press, BBC Northern Ireland had not answered questions about how much money, if any, it still contributes to the funding of the awards. An RTÉ spokesperson called its own contribution to the Iftas “commercially sensitive”, and would not elaborate. The Irish Film Board would not say how much money it gave the Iftas. Nor would TV3. The vast majority of Iftas funding, filtered through these organisations, comes from the public purse.


Screentime Shinawil no-show
Larry Bass of Screentime Shinawil is keen to emphasise that he has been an enthusiastic supporter of the awards from their inception, even co-producing the first two ceremonies. But now he is withholding his programmes from the competition. His complaints vary from the lack of rigour about supervising categories – at one point his production of The Voice lost out to the very different Mrs Brown’s Boys in a category called Best Entertainment Programme. “And the following year we were beaten by [ another sitcom ], Moone Boy .”

Television people complain that their medium is not given the attention it deserves. “Television is the poor second cousin from Tubbercurry who you have to give a Christmas present to, although you don’t give buying the present much attention,” says one television person. Like Bass, this man is a maker of factual programmes who feels that scripted programmes and dramas are given far too much emphasis. He has recently revived his membership.

“To be honest, I just voted for my friends,” he says. “There is no supervision of the categories at all. It’s up to the person submitting the work to decide which category it should go in. The same programme could go into factual series, factual programmes or entertainment.”


A costly evening
There is also the cost of attending the ceremony. If you are nominated you can attend for nothing, but if you want to bring colleagues, it can turn out to be very expensive. (The Ifta office explains it is €250 to attend the ceremony, or €200 for members. Award nominees are not charged.)

One producer estimated that being nominated had cost him €1,500 to take a table. Bewildered international guests did not understand how programmes so different could be grouped together and competing against each other, or the method by which they were judged. “And the wine was terrible,” said the producer bitterly.

This price issue is a sore one when, as one executive producer puts it, “the independents have taken such a hammering”.

Meanwhile, the mysterious delay in the transmission of this year’s awards means they now clash not only with the Celtic Media Festival, which takes place in Cornwall this weekend, but also with MIPTV, a big television and digital content festival in Cannes, which starts on Monday.

It remains to be seen whether the Iftas, a commercial enterprise on a year-by-year arrangement with RTÉ and its other funders, can survive another 12 months in show business.

The Iftas are on RTÉ1 tomorrow at 9.45pm

I am a victim of emotional abuse ... it felt like my husband had died
4

How many after-school activities should a child do?
8