If you want me to work in an office, I demand to commute in a flying car 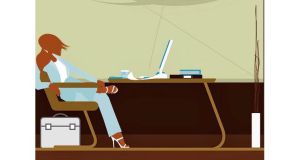 A Reuters/Ipsos poll found that one in five employees around the globe works from home frequently, while one in 10 does it every day. Illustration: Getty Images

It was a conversation like thousands of others we must have had during the decade or so that my father drove me to school every morning. But this one made a lasting impression.

My father looked at me in the rearview mirror and told me he was one of a dying breed. In the future, people like him wouldn’t have offices to drive to. By the time I was an adult, we’d all have evolved into something called “teleworkers”. We would do a few hours of work every day in our “electronic cottages” and then spend all the time we weren’t commuting to the office in our flying cars, pursuing more worthwhile projects – and taking occasional minibreaks in space. (With hindsight, I may have made that last bit up.)

My father’s prediction – which was informed by the work of futurologists such as Norbert Wiener and Alvin Toffler – and the longing with which he described it, must have shaped my view of the workplace. I grew up and became that teleworker.

During extended intervals over the last decade, I have had jobs that required my presence in an actual office, but I always seem to return to my version of the electronic cottage – a Macbook jostling for space with half a dozen empty coffee cups on a distinctly unfuturistic wooden bureau in a corner of my attic.

There are lots of advantages to working from home: I don’t have to commute; I get to see my children at lunch time; we can have roast chicken on a Wednesday. (I could work in my pyjamas if I wanted to, but being caught in your pyjamas by the ESB metre man at 4pm on a Thursday is overrated.) But there is one that overrides all the others: most of the time, I find it much more productive.

In his 1980 book, The Third Wave, Toffler wrote that humans would always want face-to-face engagement with others, but he imagined those needs being met by community involvement. Teleworking would “glue the family together”, everybody would be more efficient and have more free time. Bless him.

It hasn’t quite worked out like that. A poll of 12,000 people carried out last year by Reuters/Ipsos found that one in five employees around the globe works from home frequently, while one in 10 does it every day. The rates were highest in emerging markets countries such as India, and lowest in Europe.

Meanwhile, several studies have shown that people who work from home do more work, not less – five to seven hours more, on average. A study published by researchers at Stanford University recently on the 16,000 employees of a travel firm in China found that employees who worked from home were 13 per cent more productive, took fewer sick days, had higher job satisfaction, and were half as likely to leave. On the other hand, they were also half as likely to be promoted.

Therein lies the rub for Alvin Toffler’s dream of a society freed from the constraints of the 4ft x 4ft cubicle. Many employers still don’t buy into it. They include Marissa Mayer, the Yahoo! chief executive, who last week issued a decree banning her staff from working from home. “Speed and quality are often sacrificed when we work from home,” read her email to employees.

Some of the outcry that greeted the leaked memo may have been fuelled by the fact that Mayer is one of only a few women at the upper echelons of Silicon Valley and so many people – reductively, perhaps – hoped she would pave the way for more family-friendly workplaces. Mayer, who also recently said she didn’t regard herself as a feminist, seems determined to do just the opposite.

But whatever her motivation, I think she’s got this one spectacularly wrong. So Toffler’s dream hasn’t quite played out as planned, but “working from home” is not, as she and many others seem to believe, code for “watching episodes of Murder She Wrote in your dressing gown, while taking occasional breaks from delinting your wardrobe to dash off stressed sounding emails to your colleagues”. (Actually, I prefer Cash in the Attic.)

Even when I had jobs that required me to be physically present in the office for good chunks of my working week, I always found excuses to work from home. Now I work from home full-time, I sometimes pack up my laptop and head into the library at Trinity College to sit at a cramped desk surrounded by snuffling, sweaty students – just because I can.

Being in control of your environment is surprisingly life-affirming. Working from home is not a licence to malinger, especially if you get paid only for what you produce. Yes, there are more housework breaks, and, if you have children, occasional raps on your office door followed by an interrogation about how long human beings could survive on Venus or whether The Voice of Ireland will continue until “all the judges are dead”. (Answers: “zero seconds” and “probably”.)

But these brief interludes of time-wasting pale in comparison to the creative work-avoidance strategies people in regular jobs have come up with. Things you will never need to know until you work in an office include how to doze with your eyes open in meetings, the correct use of phrases such as “low-hanging fruit”, and why leaving your desk to locate a stapler can take 45 seconds on Monday morning, but four and a half hours on Friday afternoon.

Home-working isn’t for everyone. There are plenty of people who find it isolating and distracting – at the end of the Stanford experiment, half of the employees of the travel firm elected to go back to the office. Others would like to work from home sometimes, but need the interaction with others. And even for the rest of us, it is not always a Toffleresque utopia.

Marissa Mayer seems to have missed two key things. The first is that everyone is different, and a canny employer should embrace those differences. The other is that it shouldn’t matter where we work any more – in an office, in bed, in a shed in the back garden, or on a beach – since many employees expect to be available in any or all of the above in any case.

We’ve sacrificed enough of ourselves to productivity and efficiency. I’m not going back to an office until I can get there in a flying car.

Nurse, can I get fries with that?

Patients in British hospitals would be better off eating a Big Mac than three in four of the meals they are served on the ward, according to one recent study.

But Irish patients may not be faring much better.

The Coombe hospital said it would “review its standards” after photos of a meal featuring a flaccid sausage roll and some burnt potato wedges were posted on Twitter.

Meanwhile, leaked tender documents published earlier this week have revealed that chicken nuggets, cod goujons containing 50 per cent fish, potato waffles, and pies with 10 per cent meat are to be served up to patients in a range of hospitals in the west and northwest.

Even those with only the most fleeting knowledge of nutrition know that processed foods and foods high in salt and saturated fats have been linked to a range of coronary illnesses and cancer.

To serve them up in the hospitals where patients are being treated for exactly these conditions defies all logic.

Are you reading this online, and scrolling down the page to post a comment on what you’ve just read? You might want to read this first.

A fascinating study published by the US Journal of Computer-Mediated Communication has attempted to measure the impact of negative online comments on other readers.

Researchers at the University of Wisconsin showed a group of 1,183 people an identical story about a new development in technology. Half the people saw the story accompanied by “civil” reader comments; the other half were shown it alongside “rude” comments.

The researchers found that misery does indeed like company – the people who saw the version with the rude comments were both more polarised in their views, and more likely to have their opinions swayed by what the other posters were saying.

Writing about their findings on what they called “the nasty effect” in the New York Times last weekend, Dominique Brossard and Dietram A Scheufele said that: “Simply including an ad hominem attack in a reader comment was enough to make study participants think the downside of the reported technology was greater than they’d previously thought.”