'I never see disabled people out in clubs. Where are they?' 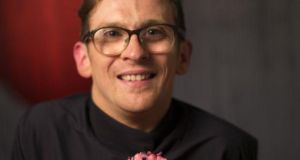 Paddy Smyth: “I never see disabled people out in clubs. Where are they?”

“Models use their looks to become a model, why can’t I use my disability to become known?” asks Paddy Smyth.

“I’m not going to lie, my dream would be to become a presenter, but at the end of the day I also want to break barriers down,” he told Róisín Ingle, presenter of the Róisín Meets podcast.

Cupid’s arrow missed the 28-year-old in a recent episode of First Dates Ireland, but Smyth won the hearts of the nation, he even trended on Twitter after his date was aired and has since started presenting a slot on TV3’s Six o’clock Show.

Smyth was already a star, however, having amassed a huge Snapchat following documenting his daily life with Cerebral Palsy with humour and honesty.

He also nearly hit the big time soon after his 18th birthday, when he narrowly missed out on a Big Brother spot. It may make him seem like a typical exhibitionist, but Smyth says he is not always “mad as a brush, dancing with strangers in lifts” and it is the vulnerability that comes with his disability that drives him to put himself out there.

“That’s why I did First Dates and probably why I was so honest on the show, it’s why I do my Snapchat. If I can help someone with a disability… look at their life more positively and also become famous at the same time, that’s amazing,” he said.

Smyth saw his disability as a USP more than anything else growing up. He has always accepted his Cerebral Palsy as part of his identity and thinks it is up to people with disabilities to change society’s perception of who they are. “I never see disabled people out in clubs. Where are they? I want to break down walls”.

There are fun aspects to being disabled too, he said.

“People carry your tea all the time, you can get to skip the queues. Sometimes I get a free taxi home and I have gold crutches. Some people may even have a disabled fetish, I don’t know. That may be the case!”

To listen to the hilarious Paddy Smyth chat to Róisín Ingle about his #DisabledLife, First Dates, fame, and more, go to www.irishtimes.com/podcasts, iTunes, Soundcloud or Stitcher.