Hurling ourselves at Shane O’Donnell 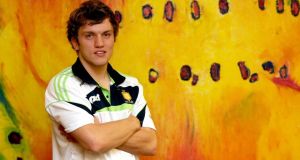 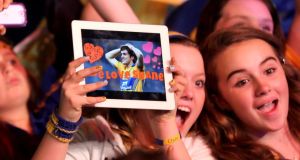 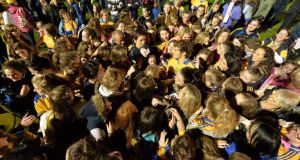 It is about 10.30pm on Wednesday, and Shane O’Donnell is being interviewed in a windowless storeroom of a pub while sudden fame roars outside the door.

“I just can’t make the connection yet. It seems a bit surreal. It’s [as if] I’ve been thrown into a different person’s life,” he says. “And it’s all based on 15 minutes of a game. A game of 70 minutes and your life changes completely, forever.”

He is eating his dinner very slowly, patiently, in the storeroom of the pub. His glamour seems out of place here; it is like watching a lion in a cupboard. His parents, Martin and Mary, are outside. The Clare hurling manager, Davy Fitzgerald, comes in to see if he is all right. His team-mate Podge Collins does the same. And suddenly you see what this is. It is show business.

Earlier in the evening, gardaí had to rescue O’Donnell from a crowd of fans. Twice. Then he and the rest of the victorious Clare team got a Garda escort from the charity match they had just played, in Six-Mile-Bridge, to Fitzgerald’s mother’s pub, the Bellsfort Inn, outside Newmarket-on-Fergus. Mrs Fitz was behind the bar. (Davy’s father, Pat, is the secretary of the Clare County Board, the body that runs hurling and football in the county.)

The gardaí spill into the pub, bubbling like schoolgirls. Next thing you know, the sports commentator Marty Morrissey arrives. That’s how big this is. Born in Cork, Morrissey grew up in Clare. West Clare. Where they do not hurl.

We are in east Clare, where they do hurl. It is said that hurling can take only on good land, where you have the grass for it. To hear O’Donnell talk about the pitch at Croke Park makes you think about the grind of playing sport in this muddy country. The pitch at Croke Park, enthuses O’Donnell, “is beautiful. Every blade of grass is where it should be.”

And, Clare fans would surely say, O’Donnell was where he should be, at 19 the youngest on a very young team, belting in three goals for Clare inside 20 minutes. He ended up scoring three goals and three points on the day, and O’Donnell isn’t that bothered with scoring points. He’s not that pushed about points, in the scheme of things.

But last Saturday he became a local hero – or, as the Clare People newspaper had it, he went from lad to legend – and his good looks have suddenly made him the centre of something like Beatlemania.

Local hero
In a country that has always been awkward about male beauty, there are no guidelines for what O’Donnell should do now. He has his father’s long Clare face and his mother’s golden colouring. His nose looks broken, but he denies this. “It’s just big.” He has a scar on his lip from where a cleft palate was repaired when he was a baby. “It was a very good repair.” He looks like a runner. “I’m 12 and a half stone, which is a lot for someone who is 5ft 10.”

Martin O’Donnell is a mechanical engineer. Mary O’Donnell, who is from the Neale, in Co Mayo, is an accountant who works from home and whose hobby is sub-aqua diving. These are the new GAA parents. Martin was a fine hurler himself. Tonight Mary’s fingernails are painted alternately blue and gold, the Clare colours.

O’Donnell is the third of four boys. There is only a year between him and his younger brother, Cillian. But Marc – also a fine hurler, according to O’Donnell – is seven years older, and Oisín, seen on the internet weeping with pride at his brother’s win, in Israel where he works, is five years older. Their parents, O’Donnell says, “were always very active, but they always had time for us”.

You can see the result of this in O’Donnell. On the day he was extraordinarily graceful in victory, talking about the hard times the country is going through. The people who love him are now circling to protect him. But he is sophisticated enough to know he’s now in a situation that cannot be solved.

We look down at the sheets of paper young girls had pressed into his hand after the charity match. They’ve stuck photographs in place, they’ve written “I Love You Shane”, and added, in childish writing, “My number 087 . . .”. Girls now shout “ I love you!” and “You’re hot!” at O’Donnell in the street. “Not people your own age, obviously,” he says, squirming slightly.

O’ Donnell is from Ennis. He went to national school there and then to St Flannan’s, a famous hurling school. “I haven’t been down town yet,” he says. “ But I know what I’d get.” What he means by this is that he would be slapped on the back, pulled into hundreds of conversations and generally fussed over.

What’s not the problem
Hurling is not the problem. “Hurling is excellent. It’s very rewarding if you’re on form. Then it’s very obvious and your touch is in and everyone knows it and you know it and it feels very good.”

Training is not the problem – not much. “You sleep and eat and train, and that’s all you do preseason.” At first he found this overwhelming. He spoke to Joe O’Connor, a team fitness coach. “I said, ‘I have no life.’ O’Connor said, ‘But that’s just what it is. And it will get better.’ ”

Winning is not the problem. “I love making my family proud, and I love to contribute to the lads winning.”

Confidence is not the problem. “You’d always have confidence you’re going to win.”

Even playing last Saturday was not a problem. He was told that he’d be starting only about two hours before the game. (The Cork manager, Jimmy Barry-Murphy, told the Clare People he had learned the previous day that O’Donnell would be starting.)

O’Donnell was very excited at the prospect of the final. “It’s like all the dreams you have when you start playing, when you’re about five or six . . . At the start I got a difficult point: it went over, and it gave me the world of confidence.”

He hardly claims credit for the first goal. “It’s just slipped off to you. The lads do all the work. After that it’s just normal hurling. When I scored [the first goal] it was weird. I didn’t get the thrill that I usually get from it. There was so much game ahead of me. You don’t really think about the crowd.”

What is the problem
The problem is being cleaved away from his team-mates and swept away from being with the lads by the constant public attention and adulation. Even on the team’s collective celebrations, he finds his time with his team-mates constantly fractured, as he is “being dragged all over the place, being pulled in for pictures. I do not like it at all.”

He is being made different from his team-mates. Last weekend Collins tweeted from O’Donnell’s phone, predicting – how to put this? – a winter of great romantic success. Shane had to tweet an apology. But he won’t complain about Collins. “No. No. Myself and Podge get on extremely well. He’s my best friend on the panel.”

In his other life, Shane O’Donnell is a normal young man. He’s not even that obsessed with sport. “I wouldn’t watch it on television, really. Unless it was hurling. And even then . . .” Perhaps, like many top sportspeople, anything but actually playing his chosen game will always be second best for him.

He needs a car to get to training. He tried to buy a Saab recently but couldn’t get an insurance company to cover him. He is a second-year student of genetics in University College Cork. (His younger brother, Cillian, is also a science student.) After getting his degree he would like to research disease. “I’d love to contribute something, to make an impact that way.”

For the moment he lives in a house in Cork, a city he likes very much, “with four Limerick guys. Two would be good hurlers and two would be into rugby. You can imagine what it was like when we beat Limerick in the semis.”

It is Cork now, he thinks, that offers him the chance of a break. “Hopefully I won’t be recognised there so much. I’m just hoping to get back to normality, to some kind of normality.”

As we come out from the storeroom into the pub it is heading towards midnight, and Fitzgerald’s sister, Helen, has some people who want him to sign a Clare shirt and a tiny, tiny hurley. Who knows how long they have waited there for him? The Clare People is already saying “It’s O’Donnell Abú for all time”.

And so the waves of fame close over his golden head again.

Would you pass the English test for an Australian visa?
8

Quitting smoking isn’t easy but these tricks could help
10