Homeless Jesus on his way to ‘the spiritual heart of Dublin’

Tim Schmalz’s bronze statue is destined for Christ Church Cathedral, and it might be followed by a second statue near where homeless man Jonathan Corrie died

After listening to the Irish Times readers sculptor Tim Schmalz decided on Christ Church Cathedral for the location of the 'Homeless Jesus' statue in Dublin. 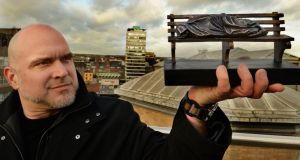 After a competition among prospective sites, Christ Church Cathedral in Dublin has won the Homeless Jesus sculpture for the park in its grounds, given by a North American Episcopalian benefactor. Tim Schmalz, the sculptor of the piece, visited many sites in Dublin before making his decision.

Homeless Jesus is a sculpture that people react to because, while it has a spiritual message, it also is secular and multidenominational. Many people think they are seeing a real homeless person wrapped in a cloak, and realise it is Jesus only when they see the stigmata on the feet. The 7ft-wide sculpture is currently on a ship travelling to Dublin, where it will be consecrated on Good Friday. While Schmalz is a devout Catholic and Homeless Jesus has been blessed by the pope, he does not see religion as a barrier.

“I think we should all go to one another’s churches occasionally,” says the Canadian, whose striking statue of Jesus as a homeless person cowering in a cloak on a park bench has been placed in Toronto, New York, Orlando, Washington DC, Rome and London.

On a park bench

When The Irish Times launched Schmalz’s request to our readers to suggest places to put Dublin’s Homeless Jesus, among the responses was an email from Conall O’Cuinn, who lives in Winnipeg.

“My father was walking in Grafton Street one day in his old age,” O’Cuinn wrote. “His Ménière’s disease suddenly kicked in and he lost all sense of balance. By holding himself against the wall, he managed to stagger to St Stephen’s Green, where he took refuge on the horizontal of a park bench.

“As he staggered in his refuge, people thought he was just a drunk old man. Luckily, a young man recognised him and brought him home. We never know why anyone ends up lying on a park bench. Jesus knew that.”

Any one of us could become the cloaked figure on the park bench. Around the time the search for the best place to put Homeless Jesus was being launched, Jonathan Corrie died on Molesworth Street, prompting an outcry. Many readers suggested that Homeless Jesus be placed on Molesworth Street, within view of Leinster House, and one even suggested that it be placed on the Leinster House plinth itself.

Schmalz also sees the need for a sculpture of Jesus near this location, but putting a public sculpture on a city street requires much more red tape than in the private grounds of Christ Church. Homeless Jesus is also too big for the location.

So when he visited Christy Burke, the lord mayor of Dublin, in January, Schmalz says they discussed a second statue for Dublin. This one, called Whatsoever You Do, is of a homeless person wrapped in a blanket begging. The outstretched hand has the stigmata of Jesus.

I was there when city workers were lifting Jonathan Corrie’s body, in a body bag, into a city van. Srikingly, there was no one there to mourn him. The body bag, like a plastic shroud, hid the tragedy, and made it seem – unintentionally – as though he was trash to be picked up.

For Jesus, sculpted as a beggar, to be near this spot would answer the call of many of our readers as an appropriate reminder of Jonathan Corrie’s death and the tragedy of homelessness.

The lord mayor, according to Schmalz, is much taken with this idea and intends to put it to Dublin City Council and planners, although Burke can’t comment on this yet, as it will be a joint decision.

Like Homeless Jesus, Whatsoever You Do doesn’t have a face. “I have been sculpting Jesus for 25 years,” says Schmalz. “To capture the likeness that is Jesus, one has to avoid sculpting his face. Everyone has their own image of what Jesus is.”

Some of our readers wanted the sculpture to go outside the Bank of Ireland in College Green. The IFSC and the Department of Finance were also suggested. Their wishes expressed an anger against the financial establishment, which Schmalz understands.

“Jesus did not say ‘love the wealthy’. His ministry was to the suffering and the poor. The heart of Christianity is to love the broken people, and this is where you find Jesus.”

Part of the appeal of Homeless Jesus, Schmalz believes, is that the squeezed middle class are in fear of becoming homeless themselves. “What’s happened within our culture is we are realising that there are really, really rich people and companies, and the average person is feeling really helpless as they are getting poorer.”

“Christianity has taught us for the past 2,000 years that all human life is sacred. It’s created our whole morality; it’s what built the society we have today.”

Schmalz decided in his early 20s to sculpt religious themes. It was his way of expressing his faith after he chose not to become a priest. “I’m an instrument for people to remember that everyone is spiritual and sacred,” he says.

The Jesuits are also considering a Schmalz sculpture in Dublin, after he visited St Francis Xavier on Gardiner Street in January. The artist already has sculptures at Our Lady of Knock in Kildare, at St John the Evangelist in Dublin, and in Marlborough Street’s Pro Cathedral, where his statue of Matt Talbot – patron saint of addicts – has needles and bottles cast in the bronze.

Secular sculpture is also a passion for Schmalz, who is completing a Gordon Lightfoot trail in Canada with a series of sculptures representing the Canadian singer-songwriter’s work. This will culminate in a larger-than-life, 14ft Lightfoot statue with maple leaves flowing out of his guitar. Schmalz sculpted with Lightfoot’s music playing in the background, and he is delighted that Lightfoot will attend the unveiling on July 1st.

By that time, many visitors will have been to Christ Church Cathedral to see the bronze Homeless Jesus and to decide for themselves what it means. And by the anniversary of Jonathan Corrie’s death, Dublin might have a second Homeless Jesus.

A HOME FOR JESUS: READERS’ SUGGESTIONS

We asked you where you thought the Homeless Jesus should be placed. Here’s a selection of your responses:

A lasagne with a difference: swap aubergine layers for pasta sheets
Real news has value SUBSCRIBE