You must ideally bring something that pops (no, not your waistband fasteners) 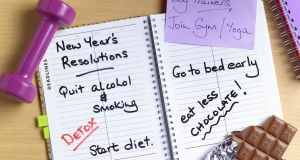 Warmed by the embers of an old year and peering through the frosted glass into 2017, I was thinking that I quite like this interregnum, this limbo between the excesses of Christmas and the sober prospect of another new year. It allows time to sit back on one’s fattened haunches and consider what’s coming next. Time to count the cost of the small lake of duck fat and the vat of superior Bordeaux that may have crossed one’s ruby lips over the last week or so. Time to make fragile resolutions and strong coffee.

Or maybe that’s not your story. Maybe you are as pure as the driven eggnog. Maybe the angel on top of your Christmas tree isn’t considering checking herself into rehab. Maybe you’re one of the Spandex brigade that has been jogging up and down the seafront in their bobble hats, making the rest of us feel sullied by our own excesses. Maybe you’ve been gracefully sipping a cocktail of blueberry and organic apricots, sprinkled with a tincture of sanctifying grace, all Christmas long, while the rest of us were bathing on the lukewarm shore of special-offer Pinot Grigio and doing the Hokey-cokey in our elf hats.

I admire you, and I’m girding my wobbly loins to join you, preparing for a spartan new year. Any minute now I’m going to lash down to the health-food store and knock myself out with a litre of coconut milk. I just need to scale the green bin and search around for the car keys first – they’re bound to be in there, under the Christmas cracker detritus and the instructions on how to remove the virtual-reality headset. (On the subject of festive crackers, by the way, how many shoehorns can one person reasonably be expected to use in a single lifetime?)

Anyway, the residue of Christmas may be hiding in our dustbins and in the little rivulets of turkey juice coursing through our veins, but the festivities ain’t over yet, mate.

You may have unzipped yourself from your satin frock, kicked off your spindly heels and unpeeled your eyelashes, but the onesie is going to have to wait. New Year’s Eve beckons with all the sparkle of a perspiring panto dame; yep, ’tis still the season to be canapéd.

I recently read, with gleeful incredulity (as I polished off someone else’s selection box), an article in a terribly nice and awfully shiny magazine for ladies about a subject dear to my heart, one of those all-important issues that are so easy to overlook in these fraught, uncertain times: party etiquette.

Yes, party etiquette, that little piece of the jigsaw that has eluded me for so long now, that shorn wing that has amputated my potential as a social butterfly. It’s no wonder my New Year’s Eve usually consists of a date with the cat and the remote control.

The number-one rule of party etiquette apparently goes something like this: “A stranger is simply a friend you haven’t yet made.”

This is patently untrue. The world is chock-a-block with strangers you wouldn’t want to befriend, notably women in Spandex who look like they’re going to pass out when you offer them a cocktail sausage and then tell you, rather pityingly, that they, like, totally swear by juiced curly kale and the pulped interior of an aduki bean.

The piece also suggests that, to be a perfect guest, you should arrive no more than 10 minutes late, preferably carrying something that pops (no, not your waistband fasteners), and then you mingle.

Mingling is not optional. You gotta mingle your little heart out. Every flaccid conversation about bicycle lanes, uncertain pensions or daring little Rhys’s simply extraordinary musical/theatrical/taxidermy skills should be endured with a smile that glitters like rage.

But the most important tip to remember if you are invited to celebrate the hastening new year with friends or neighbours around the retro fondue is this: don’t be conversationally controversial. Think tinkle rather than tonnage when it comes to talking; light and breezy rather than animated and sleazy. You may want to stamp your recycled shoes on your hostess’s newly washed floor and spew out your fears for the planet, but no, confine yourself to complimenting her organic kiwi juice and newly tightened abs. If you’re really stuck, there’s endless mileage in talking about kitchen extensions, electric cars, pet insurance, the rocketing cost of orthodontistry and the merits of making your own spelt muffins.

Maybe the article is right. Maybe this coming annus is just a little bit too horribilis to think about while the champagne is flowing. Maybe we should all stick to bubble and speak, at least until January.