Girls of the revolution: a look at life for Irish teens over 100 years

As IMMA’s courtyard is turned into a model village, a new project explores the lives of female teenagers in 1916 and today 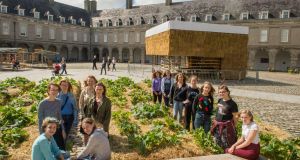 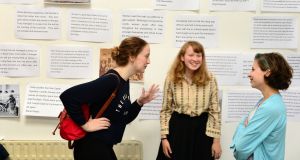 In a year of remembering a revolution, a School for Revolutionary Girls sounds like a long overdue Irish institution. Luckily, the assembly bell on such a revolutionary school is about to ring at the Irish Museum of Modern Art (IMMA).

It’s also been a year where feminist conversations have become increasingly lively and diverse in Ireland, particularly in relation to the ripples the Waking The Feminist movement has caused, along with the expanding grassroots elements of the Repeal the 8th movement, seeking legal abortion for women in Ireland.

Many of these topics will feed into the School for Revolutionary Girls at the Irish Museum of Modern Art’s latest project, A Fair Land.

A Fair Land seeks to examine the usefulness of art in 2016, as well as “echoing the role artists played in creating a new vision for Ireland pre-1916.”

It’s a big brief, and the project takes a particularly dynamic form, reimagining IMMA’s courtyard in Kilmainham as a model village. The village installation is open until August 28th, and brings together several dozen collaborators to create projects that are as immersive as they are curious.

There’s a “creative fitness” exercise routine at 7am and 4.30pm each day, a barn being built from straw bales, and a Food School teaching lessons about growing and preparing produce.

There are also family workshops and horticultural trails, debates about the function of creativity in our lives, and teams whipping up housing manifestos for Ireland, produced by the Irish Architecture Foundation. The renowned American artist Suzanne Lacy and the Irish historian Liz Gillis are collaborating on the School for Revolutionary Girls project.

Lacy has created performance art pieces on the visibility of women since the 1970s, and her work with teenagers in The Oakland Projects brought young people together to discuss issues, such as injustice and police brutality in their communities. For the School of Revolutionary Girls at IMMA, a group of teenage girls have been part – learning and thinking about lives of girls in 1916, and how that correlates with the experience of girls in Ireland now.

The project will culminate in the girls developing their own performance and proclamations or manifestos of sorts around these issues, which will be presented to the public.

Lacy says she feels a “deep kinship” with women in Ireland, having spent time in the country in the 1990s, and she has especially enjoyed, “finding out more of the revolution and the way Irish women were so prominent in key ways and how it ties into the suffrage movement.”

The centenary year of 1916 has offered many opportunities for young people to engage with the authors of and the actors within the Rising. And when it came to this project, “It was quite obvious that I would work on the revolution and women,” she said.

The project will be both pedagogic and performative, with Lacy seeking to create “a rich educational environment” for everyone involved.

“We want to accomplish two things,” she said over the phone from California, “one is a meaningful and educative, or I guess you’d call it personal solidarity building, but let’s say ‘educative experience’, and then it’s also an art work. It has to be more than a workshop.”

Regarding the issues the girls will discuss, Lacy mentioned equal pay, bodily autonomy and said, “I also think it’s very important to talk about body image and the way women do or don’t join in solidarity with other women. The internet culture of competition that gets established – that’s a fairly large concern… I want to make one thing really clear: we aren’t going to be promoting a particular agenda.

“I’m not interested in telling the young girls [what to think or say], I would simply try to support young women to listen to each other, pay respect to each other, but also interrogate their positions.”

Liz Gillis is the author of The Fall of Dublin, Revolution in Dublin, and one of the finest and most accessible books on revolutionary women in Ireland in the early 20th century, Women of the Irish Revolution.

Her experience in engaging with young people this year in the context of the centenary has been “amazing.”

Gills, who was a tour guide in Kilmainham Gaol for nearly 10 years, said when it’s not dictated to young people what to produce, they tend to produce things that are incredibly honest. “They don’t have any political agenda, they’re just seeing it for what it is, men and women who fought in a revolution… they’re going back and asking their parents questions, looking at their family history, looking at their own community, realising something important happened where they lived, they’re starting to look at things a little bit differently,” she explained.

“The kids will ask the difficult questions because they want the honest answers. They’re the most honest and brutal audience, and they won’t be fobbed off.

“Give them the facts and try not to give them your personal impression on it, and let them decide for themselves.”

Gillis’ work with young people is probably bolstered by the fact that she insists she doesn’t have an academic approach to history.

“It’s more for the people who think they’re not interested in history,” she said. She hopes that the school will spark an interest in history among the girls and also help them realise “that these women, although they’re 100 years apart, have similarities, that they were ordinary girls like them today, that the issues that affected them, are they still relevant today? To make them aware about what the women went through, and that they’re an essential part of society and should be treated as such.”

The School will also visit Richmond Barracks where 77 women were held.

“It’ll be interesting to see what they produce themselves,” Gillis said, “they might realise their lives weren’t that different.”

The School for Revolutionary Girls will showcase its work on Sunday, August 28th from 2pm to 4pm. See imma.ie

WHAT THE GIRLS SAYS
We asked some of the teenage participants what the idea of a Revolutionary School for Girls means to them, and what other revolutionary change they feel needs to occur in Ireland.

What does the idea of a Revolutionary School for Girls mean to you? “A school where girls are encouraged to think for themselves. It would have been very unusual for girls to be educated in 1916 and to be in a revolutionary school must have been amazing – they would be allowed to speak-up, and voice their opinions and stand up for women’s rights. I hope to get a real feeling of how their lives were. I would love to gain a better understanding of what it was like for a 16-year-old girl back then. It will be great to see history reenacted, not just in a book. It will bring the era alive for me and I can’t wait to participate.” – Lydia Ardill, 16

“A place for young women with similar interests to come together to discuss changing modern society. To be honest, I always keep my expectations low to avoid disappointment, but I’m really excited at the prospect of talking about relevant and important issues with like-minded people. I hope to feel a bit more involved, because although I call myself a feminist I often feel that I’m just observing from the sidelines. I think it will be a great opportunity to have a voice and change perceptions, even if that means one person will think a little more about how they act or what they say.” – Juno Kostick, 14

What other kinds of revolutionary change do you think Ireland needs? “I think Ireland is up to date on many human rights issues but it saddens and angers me to say that Ireland is the last country in the EU that doesn’t have legal abortion and I think this needs to be changed as soon as possible.” - Juno Claffey Hegarty, 14

“Ireland has made great strides towards a more inclusive society, gay marriage and Waking The Feminists are prime examples of this. However, we need to continue this fight until there’s equality for all. People should be paid the same wage for the same job, irrespective of their gender, race or sexuality. There needs to be an immediate repeal of the Eighth Amendment and separation of Church and State. Ireland needs to move towards a more secular society.” – Aoife Bracken, 15