GAA's Briege Corkery: ‘We were brushed aside and that was very disappointing’

Irish sportswomen, The Corrs and the Gloria choir take part in Episode 13 of The Women’s Podcast 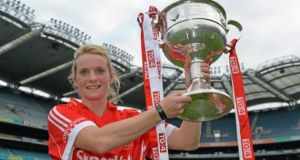 One of the most successful GAA players in Irish sporting history has said it was “very disappointing” the Cork ladies football team had only minutes on stage at the Late Late Show after their all Ireland win in September.

“They drove all the way up to Dublin on a Friday evening. The girls had to take off work, and they went up for six minutes and back down the road again.

“They should have gotten a little more time. In a way, we were brushed aside, and it was very disappointing to see,” Cork player Briege Corkery told Irish Times journalist Anthea McTeirnan, guest presenter of the latest episode of The Women’s Podcast.

Corkery, who holds 16 All Ireland medals, ten for football and six for camogie, discussed the achievements of women in sport and other issues, including the lack of media coverage, with Irish Grand National-winning jockey Katie Walsh and Tania Rosser, Irish international women’s rugby player. Rosser was part of the team that beat New Zealand in a historic World Cup win last year.

Rosser said: “There was huge media coverage of the women’s rugby team . . . but it hasn’t kept going. There was an opportunity to really push any female athlete in any sport at that time.”

The Irish Times now features two pages dedicated to women’s sport every Thursday, including a weekly column by Sonia O’Sullivan.

Walsh talked about the unique world of horse racing, where male and female jockeys compete against each other. “When you cross the line after riding a winner, you don’t go, ‘Isn’t it brilliant because I’m a girl?’ You go, ‘That was brilliant. I’m delighted with what I did because I did it for myself.’”

Walsh and Corkery are nominated for the The Irish Times/Sport Ireland Sportswoman of the Year Award.

The Women’s Podcast is giving away two tickets to the awards ceremony, which will be held on December 18th at the Shelbourne Hotel in Dublin. To enter the competition, email marketing@irishtimes.com by December 11th and explain why you would like to attend.

Also on the podcast, Daily Features Editor Roísín Ingle talked to Sharon, Caroline and Andrea Corr about their first album in a decade, White Light, and what they have been up to in their 10-year hiatus from music.

“We never stopped and said, ‘We’re never going to do this again.’ We did five records, two unplugged. We did a lot of work, and it was time for us to take a break,” Caroline said.

Andrea called the height of their fame “incessant” and “completely consuming”.

“There was one aspect of our lives we had focused on and other aspects we hadn’t at all – our personal lives,” she said.

The sisters talked about rediscovering the “magic between them” in the recording studio, performing for the first time without their late father in the audience and the importance of setting an example for their children.

“I found it very hard to watch anything about the Corrs online – I felt a sadness because we weren’t doing it anymore. I couldn’t watch it, so I wasn’t exposing my children to what we’d achieved,” said Sharon.

The Corrs will perform at the 3Arena in Dublin on January 28th as part of their Irish and UK tour.

This week’s podcast also features Glória, Dublin’s Lesbian and Gay Choir, singing their version of Winter Song. They will sing that and other favourites at their annual Christmas concert on December 18th at St Patrick’s Cathedral in Dublin. Tickets are available on eventbrite.co.uk and gloria.ie.

With the decorations going up and the trees being decorated, The Women’s Podcast wants to know what you want this Christmas. Our question of the week is: What is your fantasy Christmas present?