Formidable soldier who held the line in the Middle East 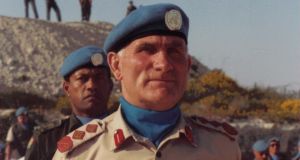 Lt Gen William (Bill) O’Callaghan (also known as “The Bull” Callaghan): an accomplished and unflappable leader, he described the experience of peacekeeping in the Middle East as follows: “We must look for trouble at the four points of the compass. And then we look behind our backs.”

Throughout his Army career, Lieut Gen Bill O’Callaghan, who has died aged 94, was not known by his true name.

To his comrades and many admirers, he was “The Bull” Callaghan. But he wasn’t actually a Callaghan at all. He was born William O’Callaghan, but was registered on his birth certificate as “Callaghan”.

The Defence Forces, feeling obliged to adhere to the official record, called him Callaghan throughout his lengthy service.

It was a career of achievement and distinction, particularly in UN peacekeeping missions, where he held senior rank on three occasions.

William O’Callaghan, known to all as Bill, as well as “The Bull”, was born in Buttevant, Co Cork to Cornelius O’Callaghan, a farmer, and Margaret (née Walsh). He had a twin sister, Kathleen, and three other siblings, Jack, Lilly and Eileen.

After schooling at the Patrician Brothers in Mallow, he joined the Defence Forces aged 19. In 1944, he married Carmel (née O’Connell) and together they had seven children.

He saw overseas service in the Congo and Cyprus. He was company commander, then second-in-command and finally commander in the latter location. Senior ranks followed back home and he eventually became assistant chief of staff of the Defence Forces.

O’Callaghan’s Unifil forces in the 1980s sought to restrain Israeli troops who had invaded Lebanon in retaliation for attacks by the Shia militia Hizbullah. At the same time, it was itself attacked by Israeli-sponsored Christian militias.

He was unflappable in the face of high drama. Retired colonel Andrew Kilfeather recalls an incident in 1982 when Callaghan met the chief of the northern command of the Israeli Defence Forces.

The officer looked at O’Callaghan and said simply: “Gen Callaghan, we’re going to invade Lebanon in 10 minutes.” O’Callaghan’s response was unruffled: “That’s fine,” he said, “we’ll have our meeting so.”

O’Callaghan once described peacekeeping in the region thus: “We must look for trouble at the four points of the compass. And then we look behind our backs.”

Retirement, in 1987, offered him the opportunity to pursue other interests. He and Carmel enjoyed walking and also spent long periods in the United States, where one of their daughters lived. These trips allowed him attend US golf majors, which he did religiously.

He was an accomplished player himself, and also retained throughout his life a love of rugby, having played front row for Roscrea into his 40s, his nom de guerre deriving, according to some, from his bullish zeal in the scrum.

Throughout a long retirement, he retained a deep interest in the Middle East, one nurtured through a long friendship with the journalist Robert Fisk.

Bill O’Callaghan played close attention to the individual lives of those who served under him, of whatever rank. Typical among comments on his death were “a fine soldier, officer and gentleman”. Another soldier said: “A great man and a great general. He was a great role model at home and abroad. A holy terror though with any officer whose standards fell short of what he expected”.

O’Callaghan was predeceased in 1994 by his wife, Carmel. He is survived by their five daughters and two sons, Marie, Patricia, Carmel, Claire, Fiona, Bill and Declan.