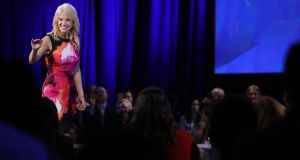 International Women’s Day is a good time to reflect on the state of the women’s movement. The last year, which heralded the terrifying rise of the hard-right and the dismaying fracturing of the left, makes for some difficult reflection. I want to talk about the challenges posed to feminism from both sides of the political spectrum in an era where the middle appears to have fallen out of Western politics.

I will start with some history. The first wave of feminism was non-partisan. The suffragists in Britain didn’t care if the Liberals or the Conservatives gave them the vote – they just wanted the vote. (And it was, in fact, a Conservative government that extended the vote to all women over 21 in 1928.) In the US, Susan B Anthony famously encouraged each and every woman to hold herself “non-partisan, or better all-partisan, pleading with every man of every party to stamp ‘yes’ at amendment No. XI.”

In contrast, the second wave of feminism was a partisan wave, associated with the left. This is because it arose from the New Left of the ’60s and ’70s, a movement which united socialist concern for the rights of the working classes with anti-war activism, the struggle for civil rights for African Americans, gay liberation, and reproductive rights. However, we shouldn’t mistake the fact that the second wave was leftist for the idea that the left was feminist. In fact, a large part of the impetus behind the rise of the second wave in the first place was the marginalisation and harassment of women within the New Left. Further, the increased inclusion of feminism in the remit of the US Democratic Party was part of what destroyed its working-class support in the ’70s.

I don’t suppose I will get much pushback if I suggest the present wave of feminism is also partisan, and also leftist. But I predict some ruffled feathers if I suggest the left is still hostile to feminism. Meanwhile, the right cleverly espouses a faux-feminism, co-opting the second wave’s language of independence and empowerment to detract from the kind of structural thinking necessary to end patriarchy.

A good example of this faux-feminism is US president Donald Trump’s adviser Kellyanne Conway’s recent articulation of “conservative feminism” as follows: “There’s an individual feminism, if you will, that you make your own choices. I look at myself as a product of my choices, not a victim of my circumstances.” Conway goes on to detail the story of her mother’s hard work as a single parent as a lesson for all women.

Conway’s conservative feminism presents a fantasy of meritocracy, where those who work hard succeed, and those who simply make the right choices can withstand any diversity. In short, it exalts the agency of the individual above all social structures. And Conway herself, daughter of a single parent and now a powerful political player, claims to provide the proof of the pudding.

Have you noticed that the right and the far-right seem more comfortable with women in positions of leadership and power than the left? Theresa May, Marine Le Pen, Frauke Petry – these are women whose ideologies are anathema to me, yet I find it extremely interesting that the macho right can get behind them in a way the ostensibly more inclusive left can’t get behind its women. Why? Well, perhaps because these leaders can be used as faux-feminist exceptions to the rule, showing the barriers to inclusion revealed by structural analysis won’t stop women with enough grit.

This sheen of faux-feminism is dangerous, because it is alluring. Of course it is – who wants to play the victim? Who wants to believe their choices are constrained by the structures in which they live? And, anyway, what’s the other side selling? Actually, nothing terribly different.

For example, in late November, socialist and erstwhile presidential candidate Bernie Sanders told a young Latina women who asked him how she could become the second ever Latina senator, to move beyond “identity politics”. It wasn’t enough, he advised, for her to say: “I’m a Latina, vote for me.” Rather, she had to encourage people to vote for her through tackling the banking, insurance, drug and fossil-fuel industries.

Of course, the young woman’s question never implied that people should vote for her because she’s Latina. It implied, rather, the racial and gendered biases that would affect someone like her on her path to power. Effectively, the answer given as to how to deal with racism and sexism is the same as Conway’s – stop playing the victim, be a product of your choices.

So, we find ourselves as feminists between a right-wing rock – with its fairy tale of limitless individual agency – and a left-wing hard place – where acknowledging barriers to participation for women and people of colour results in warnings not to indulge in “identity politics”. This is clearly a juncture where insistence on the structural nature of women’s oppression is urgently necessary, and necessary in what Susan B Anthony might call an “all-partisan” manner.