Emer O’Toole: What can we expect of Enda Kenny’s abortion convention? 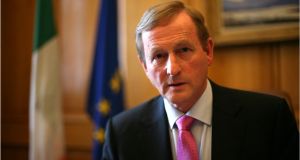 Enda Kenny disregards opinion polls because the people answering them don’t yet see “just how profound the decision is”. Photograph: Dara Mac Dónaill

It has been an eventful month in the fantastical world of Irish abortion politics. Most notably, the UN Human Rights Committee ruled Ireland in breach of covenant. Ireland’s abortion laws prevented Amanda Mellet from easily accessing information on best medical practice, they forced her travel to the UK to have her unviable pregnancy terminated, they separated her from loved ones and medical professionals she knew and trusted at a very difficult time, they made her procedure prohibitively expensive, and they forced her to travel back home before she was fully recovered, subjecting her to health risks.

The HRC ruled that this constituted cruel and degrading treatment: that Ireland’s abortion laws denied Mellet’s human rights. When you take social and historical context into account, this is a landmark judgment. But if you look past the particularities for just a moment, what’s really remarkable is that anyone could fail to see that packing women who need abortions off to England is cruel and degrading. It is remarkable that we need the UN to tell us this at all.

Ireland’s abortion regime is a kind of a fiction. It can only exist if its proponents resolutely refuse to see, overwriting fact with fairy stories. Our laws effectively make the “unborn” a citizen from the moment of implantation, thus requiring an act of creativity to furnish the embryo with thoughts and feelings, or perhaps, dependent on one’s religious proclivities, an ideologically convenient soul. Our fictions proclaim Ireland abortion free, when it has approximately the same abortion rates as other EU countries. We just like to torture the women a bit first: for moral reasons, you understand.

Kenny’s convention is meant to gauge public opinion. If the Taoiseach fails to acknowledge methodologically sound extant research in order to proportionately choose participants, we can quite comfortably assume that his convention will not be an exercise in gauging what people think, but, rather, in telling people what to think. Regardless of what the majority of Irish people believe, the Catholic moralising of Iona and the Life House will be trotted out in the name of balance, as though these opinions are somehow as necessary to our understanding of abortion as the findings of the human rights commission, international consensus on best medical practice, or the lived experiences of the approximately 4,000 Irish women a year who must travel or self-abort.

We can expect of Kenny’s convention, in short, the same kind of “balance” we have come to expect of our national broadcaster: the kind that considers the issue of whether women should have human rights to have two equally reasonable sides; the kind that gives serious consideration to people who actively campaign to subject women to cruel and degrading treatment and calls this – incredibly – “fairness”. This impartiality is also a fiction.

Kenny’s artistic license in relation to our abortion laws made the jump from implicit to explicit at the beginning of the month, when, in response to questions from TD Bríd Smith on what he just knows would be every Irish person’s favourite constitutional amendment if only they thought about it profoundly enough, the Taoiseach offered the following nugget of Pulitzer Prize standard fiction:

“The fact of the matter is that in 1983, the 8th amendment was introduced into the Bunreacht na hÉireann, the Irish constitution, by the Irish people. And that was guarantee to the right to life of the unborn. There were three referenda after that. And, in each case, in each of those referenda, by the people, not just by any parties, the people decided to keep that reference in the constitution.”

Of course, no Irish person under the age of 50 has had the chance to repeal or keep the 8th. There have been four questions put to the people on abortion since 1983. These dealt with the right to information on abortion; the right to travel to access abortion; and, twice, the abortion rights of suicidal women. In each, the people voted to expand abortion access. So, you know, pretty much the opposite of joyously defending the 8th.

The Taoiseach has since corrected the Dáil record, but it remains inconceivable that he did not know the facts at the time. He cannot be that ignorant of an issue which has divided Irish society for decades and on which he had to reluctantly legislate in 2013. But why would he let something as inconsequential as knowledge of the facts cloud a delightful story in which everyone in Ireland is as enamoured of the 8th amendment as he? The Irish people lack understanding of the profundity of the abortion question, after all. Best to rewrite the story entirely.