Broadside: It is the eternal fate of women on the left to be the driving force of a movement where men seize power and drop us at the first not-particularly-high hurdle 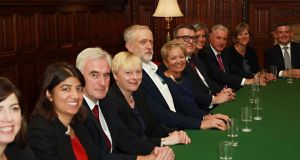 For many of us on the left, watching Jeremy Corbyn take the helm of British Labour was an exhilarating thing. Principled and informed, he promised a politics geared towards social justice, peace, and equality. His ideals were backed up with credible economic thought and expressed in accessible – though nuanced – language.

Of course, the excitement wasn’t really about Corbyn; it was about the movement behind him. I knew that kind of energy existed in the UK: I lived in London for five years and marched with hundreds of thousands of people on the streets: against £9,000 annual university fees, against the Tories’ brutal cuts. But, before Corbyn, I hadn’t seen that same energy in mainstream British politics.

Media attacked, the right designating Corbyn a regicidal Stalinist and the left wailing that a Corbyn-led Labour would never win the 2020 election. But none of the leadership candidates could have won 2020; not Burnham, not Cooper, not Kendall. At least Corbyn offered an alternative to New Labour logic: “People vote for the Tories. If we want them to vote for us, we should be more like the Tories.”

If it seems odd for a Galway girl, resident in Canada, to be politically enamoured of a mousy, older English gent, well, it shouldn’t. Socialism means little without internationalism, and politics ripple. What if Corbyn’s Labour showed that meaningful opposition to austerity within parliamentary politics was both possible and powerful? What if that energy reached Ireland, ending meaningless electoral battles between two nigh-on indistinguishable centre-right parties?

I talked about Corbyn incessantly. I did the supportive things you can do from afar: shared links, left comments, added a voice to the groundswell of support. When I awoke on Saturday, September 12th, and found he had won the leadership with such a substantial mandate, I was elated. I stayed glued to the Guardian updates, excited to see Corbyn put his promise of a gender-equal shadow cabinet into practice.

He appointed John McDonnell as shadow chancellor, and while I was disappointed it wasn’t Angela Eagle, I understood: Corbyn wanted a firm ally close. But when Hilary Benn and Andy Burnham were appointed foreign secretary and home secretary, respectively, meaning that the five most senior positions in the party were held by men, I realised that Corbyn had fulfilled his promise of a 50:50 shadow cabinet by giving senior positions to male colleagues and junior ones to female colleagues. It was a slap.

Some bought the proffered explanation: Corbyn was doing something radical by giving the less powerful roles to women, then restructuring the hierarchy. But that’s ridiculous. If your aim is to shake up valuation of political positions, why on earth would you give men all the traditionally powerful roles? It’s implicit sexism, not radical restructuring.

Numerous progressives saw the critique of Corbyn’s male-dominated shadow cabinet as evidence of more mindless media negativity towards him. Translation: you’re either with us or against us.

Perhaps the most maddening feminist defence was that, sure, Corbyn had appointed men to the top positions, but it was okay because austerity affects women disproportionately, and Corbyn is anti-austerity. Take Dawn Foster’s piece on Open Democracy: it points to examples of anti-woman female politicians (Theresa May, Margaret Thatcher) to argue that, as women in positions of power do not necessarily help women, giving the senior jobs to men is fine. Because only men can save women from austerity? Because powerful women would inevitably corrupt Corbyn’s anti-austerity agenda? Please.

I get the sentiment: swept up in the exhilaration of someone genuinely progressive holding a position of power in British politics, we don’t want to rock the boat.

But this is eternally the fate of women on the left: to be the driving force of a movement where men seize power and drop us at the first not-particularly-high hurdle. To be played off with platitudes about how the roles men have bequeathed to us are very important too. We accept it because it’s painful to acknowledge that the socialist movement is also patriarchal and that the left can – and does – replicate structures of gender oppression.

I bit my tongue for a while. I didn’t want to be another media voice attacking an anti-austerity movement. And I’ve been impressed with much of what Corbyn has done over the past two weeks: his strategy of reading citizens’ questions to the prime minister; his proposed Labour conference vote on Trident; his review of university fees and legal aid cuts. And it was pretty badass that he wouldn’t sing God Save the Queen.

But I don’t believe that he is committed to gender equality. And if we, as women, put our muscle behind men who relegate us to positions of less power, then we are the authors of our continued subordination.