Broadside: Women of all races support Clinton over Sanders, despite warnings from their progressive peers that they shouldn’t ‘vote with their vaginas’

Hillary Clinton releases a new campaign ad, saying that US companies who are 'moving profits to Ireland' to avoid paying taxes in America will 'pay a price' should she be elected president. Video: Hillary Clinton 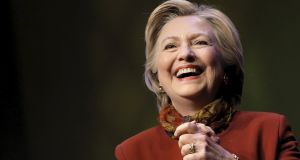 I have been enjoying the US presidential primaries. It’s quite Lovecraftian: in the red corner, there’s the dark lord Cthulhu attempting to prise open the hell- mouth of the universe and release the forces of evil upon the Earth. In the blue corner there are two great but flawed candidates, who, following an initial power struggle, will have to join forces to prevent the rising tides of doom.

I like Bernie Sanders. I think he is principled, if prone to making beautiful promises that he must know he can’t keep. I am glad he is in the race, not least because he has pushed Hillary Clinton’s campaign to the left in important respects. I think he is awful on some issues (gun control); I think Clinton is awful on some issues (Palestine). But I passionately want Clinton to win.

Now, before you accuse me of being an establishment sheep and bombard me with lists of political wrongdoing that can be linked (however tenuously) to Clinton, I would like to draw on an essay by one of my intellectual heros, Rebecca Solnit.

In the run-up to Barack Obama’s re-election in 2012, Solnit explained that she understood US politics to be deeply flawed, but also capable of achieving some good things. Celebrating them does not imply an uncritical acceptance of the system. Rather, it implies the following “insanely obvious principle”:

I am aware that Clinton does not symbolise an end to all the ills of (to borrow a phrase from Bell Hooks) white supremacist capitalist patriarchy. Obama didn’t. And Sanders doesn’t either.

Many of my friends have expressed surprise about my vocal love for Clinton. Isn’t she “the establishment”? Some assume my enthusiasm is strategic. The ultimate game plan, after all, is to thwart the psychotic Troompa Loompa, and, in this respect, Clinton is certainly a safer bet.

I am not above strategic politics. The Republicans are thinking strategically. As I learned from Rena Pacheco-Theard, more super-PAC money has been spent attacking HillaryClinton than any other candidate in this primary race ($3,558,660 against Hillary, compared with $10,000 against Bernie). Clearly, the enemy knows who it would rather fight.

But I am not in Camp Hillary for strategic reasons. I have read two of her autobiographies, Living History and Hard Choices, as well as the critical investigative biography, Her Way, and I find her inspirational. Not impeccable, but inspirational.

From serving as the sole woman on the Nixon impeachment team in the 1970s to her decades-long activism on behalf of children’s rights; from efforts towards universal healthcare that date back to the 1990s to her election as the first female senator for New York; from her global fight against maternal mortality to her partnership and friendship with Obama; from her pioneering approach to American diplomacy to her launch of the Women in Public Service Project: there is so much about Clinton’s career to celebrate.

In democratic societies there are, inevitably, competing ideologies. And, in an ideologically divided society such as the US, candidates who promise policies that run radically contrary to the deeply held beliefs of almost half the population are at best unrealistic and at worst disingenuous. Compromise drives change; just look at Obamacare.

“I realised I had crossed the line from advocate to policy maker,” Clinton writes. “I hadn’t altered my beliefs, but I respectfully disagreed with the convictions and passion of the Edelmans and others who objected to the legislation . . . [U]nlike Bill, they didn’t have to negotiate with Newt Gingrich and Bob Dole or worry about maintaining a political balance in Congress.

“I remembered all too well the defeat of our healthcare reform effort, which may have happened in part because of a lack of give-and-take.”

Those most convinced by Sanders’s rhetoric of revolution are white men. Black and female demographics support Clinton. If we move beyond a purely economic conception of “the establishment” towards an intersectional analysis of power, then those raging against the machine with Sanders actually constitute the machine.

Sanders has invested much energy in positioning Clinton as Wall Street’s candidate, citing the well-compensated speeches she gives financial institutions as evidence of implicit corruption.

But Clinton is – in a far more demonstrable sense – the candidate of racial minorities and women. Her campaign’s success is down to her popularity with black voters, a popularity due to decades of carefully cultivated relationships with African-American communities.

Women of all races support Clinton over Sanders, despite warnings from their progressive peers that they shouldn’t “vote with their vaginas”. But why shouldn’t disadvantaged groups vote for members of their demographic? Voting for someone who has experiential knowledge of the obstacles to participation that affect you makes perfectly good sense. And Clinton’s exemplary record on women’s rights is evidence of this.

I’m sceptical of the progressive credentials of a political movement that attracts predominantly white men and routinely dismisses the considered voting tactics of people of colour and women as ignorant or complacent. Hillary Clinton worked long and hard to win those loyalties. I very much hope she is given the chance to repay them.