Emer O’Toole: Abortion on demand – an apocalyptic vision of Ireland 2021

Broadside: ‘Everyone knows that contraception isn’t fashionable any more. Not since abortion on demand came in’ 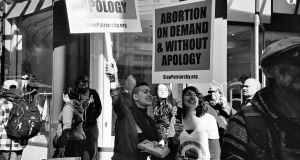 Pro-choice protesters in San Francisco in 2013. Photograph: Steenaire via Flickr

Her father tried to dissuade her. “Sweetpea, you had an abortion for your birthday last year. Are you sure you need another one already?”

They stood outside Cloud 9 Abortion Spa, an establishment on a swanky street corner. Since Ireland legalised “abortion on demand”, clinics had opened on every street corner, just as predicted by Fine Gael TD Ray Butler. It was now commonplace among Ireland’s female population to boast about how many they had tried.

The young woman shrieked, unaccustomed to her whims being questioned. “Daddy. You know this abortion clinic is the best, and I haven’t been yet. Camilla went last week. She said they give you prosecco and strawberries and little Leonidas chocolates, and the nurses are all part-time models. It’s not fair.”

The man’s face thickened into something resembling resolve. “Sweetheart, can you explain to me how you even got pregnant again when I booked you that luxury IUD fitting with celebrity doctor Christian Jessen at Christmas?”

“You’re so embarrassing,” his daughter groaned, motioning at him to hush lest one of the well-heeled ladies entering Cloud 9 hear. “Everyone knows that contraception isn’t fashionable any more. Not since abortion on demand came in.”

It was true. From the window of Cloud 9 Abortion Spa, posters of bronzed Amazonian beauties beamed at passersby, captioned “Don’t let that pregnancy spoil your beach body”. In fact, just as Wexford People columnist Ger Walsh had suspected, following the advent of “abortion on demand”, bikini terminations were the best-selling product in Ireland’s new abortion salons. Clearly, Bishop Kevin Doran had been absolutely right when he said that abortion was simply a symptom of materialism.

“Darling,” tried her father again. “Might all of these abortions place unnecessary strain on your reproductive system?”

“Oh no,” she confidently asserted. “I saw an ad for Cloud 9 on RTÉ the other day. It said that repeat procedures are the best way to keep your figure. And – if you qualify for their loyalty scheme – the 10th one is free.”

“But is television really the best place to get your information on abortion, sweetheart?”

“Why not? That’s where former taoiseach Enda Kenny gets his.”

Beaten, the man bowed to his daughter’s abortion demands and followed her into the glitzy clinic, sighing as he pulled a credit card from his thick wallet.

Yes, I know it’s ludicrous. But I’m pretty sure that the above apocalyptic vision is what “abortion on demand” has come to mean in Irish political discourse.

Minister for Justice Frances Fitzgerald said recently that the phrase is insulting. I agree: whenever I’ve heard it used in the Irish context, it plainly embodies a deep distrust of women who choose abortion.

In Ireland, the phrase “abortion on demand” is not used by pro-choice and feminist activists, as it was originally in 1970s America. Rather, anti-choice politicians, journalists, media commentators and assorted God botherers use the terrible spectre of “abortion on demand” to dissuade the Irish electorate from accepting a Trojan horse of legalised abortion in cases of rape, incest, fatal foetal abnormality, and threats to life and health. Give those harpies an inch, we’re told, and they’ll take a mile.

Unsurprisingly, the liberalisation of a country’s abortion laws is linked with the strength of its women’s rights movement. In the 1970s, American feminists marched for “Abortion on demand and without apology”. And they got it.

Four decades later, feminism is still a dirty word for many Irish people, and those of us working to repeal the Eighth Amendment use gentle phrases such as “abortion rights,” and “abortion by choice”. We know, instinctively, that in Ireland women are not supposed to demand anything.

If “abortion on demand” means universal access to safe, legal abortion into the second trimester of pregnancy, then I support it with every bone in my body.

I do not think of women as materialistic, greedy little brats stamping their feet for the luxury of reproductive services that they don’t really need. I understand that the fetus is insensate and insentient up until the third trimester of pregnancy. I see all that “killing babbies” rhetoric for the nonsense that it is.

It’s 2016, and in most developed countries women no longer have to “demand” abortion rights. Rather, abortion is available to them as needed. And, as difficult as it is for patriarchal pundits to accept, women do not require a team of psychiatrists to tell them when they need an abortion. They know.

Part of me feels that the phrase “abortion on demand” has become so inherently sexist in the Irish context that we should call people out when they use it and ask them to change their terminology. Would they, after all, talk about “vasectomy on demand” or “condoms on demand”?

Still, another part of me – and I think this part is winning – would rejoice to see Ireland’s pro-choice movement go on the offensive and reclaim that powerful 1970s feminist slogan: “Abortion on demand and without apology.”