Dublin and Cork among top 100 cities for millennials

Amsterdam, Berlin and Munich head the table, with Dublin 33rd and Cork 61st 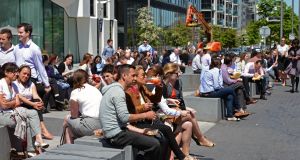 Dublin and Cork feature in a rating of worldwide cities popular with millennials as places to live and to visit. Photograph: Eric Luke

If beer and food, nightlife, internet speed and access to contraception are among your priorities when choosing where to live or to visit, Dublin and Cork might fit the bill, but Amsterdam, Berlin and Munich are where it’s at.

The Irish cities are 33rd and 61st in a ranking of 100 worldwide locations best suited for millennials to live in or visit, compiled by furnished housing aggregator Nestpick.

The scores were compiled across 16 criteria deemed most relevant to the demographic in choosing where to live or visit, combined into four main categories – Business Ecosystem , The Essentials, Openness and Recreation.

The Business Ecosystem score was based on employment prospects, the vibrancy or otherwise of the start-up scene, and the city’s tourism appeal (the rationale being that travelling to a city is one of the first steps to relocating there).

The Essentials considered housing, transport, healthcare, internet speed – and an “Apple Score” representing access to technical support and calculated on the basis of the number of Apple Stores per capita.

Openness scores were based on a city’s immigration tolerance, LGBT friendliness, gender equality and access to contraception.

Millennials like to work and play hard, according to the survey, so the Recreation criteria included the price of beer, the number of night clubs and their opening times, and the number of annual music festivals in and around the city.

Dublin and Cork both received maximum scores of 10 out of 10 for immigration tolerance. Dublin also scored highly for gender equality and internet speed, but performed poorly in terms of nightlife (scoring 1 out of 10), housing (2.60) and access to contraception (2).

The top-rated city of Amsterdam received only one maximum score, for its LGBT friendliness, and its lowest rating was 1.70 for housing. A strong business ecosystem, high levels of openness and good recreation facilities contributed to the Dutch city’s strong performance.

And the least attractive city in the world to millennials, according to the rankings? That would be Lima in Peru.

“At Nestpick we’ve witnessed firsthand a clear pattern of migration among millenials from all over the world to specific cities,” said the company’s managing director, Omer Kücükdere.

“UNWTO (United Nations World Tourism Organisation) data confirms that travellers among this generation choose these same cities for their leisure time, confirming a clear appeal of these cities over others for this group.”

Enduring mystery of those missing magical cars continues to baffle
4

Roof with a view at bijou canal cottage for €350k
5