Getting drunk with old acquaintances, competing with toddlers, and being verbally abused by the we-never-left brigade: just some of the rituals when you’re back for the holidays 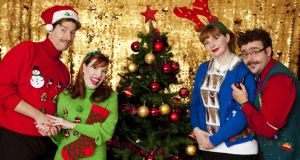 Typically my wife and I arrive at the family homestead on Christmas Eve. My siblings and I wordlessly take our positions around the television and proceed to be waited on hand and foot by my parents. In recent years my kind-hearted sister has taken to helping, but I find this behaviour a bit much. “There are three in the will!” I like to tell her.

On Christmas morning everyone gathers around the Christmas tree to see the look on my little face as I open my presents. Or they used to do that until two things happened: one, someone decided that the way forward was Kris Kindle, which means fewer presents for me; and, two, my sister had two children, and now everyone gathers to see the look on their little faces instead.

Is it right to feel competitive with a toddler on Christmas morning? Yes. Why is it that when he stands in his onesie in the middle of the room and loudly sings a spontaneously composed song it’s “adorable”, yet when I do the very same thing it’s “uncomfortable viewing”?

This is the sort of double standard I like to point out at Christmastime, to shake my family out of their bourgeois complacency. “We appreciate your honesty,” they say.

The present-opening charade finished with, it’s time to eat. The best thing about Christmas is the way you can just eat and eat and eat, and it has no effect on your health. (I think there’s an article about this in Tuesday’s Health + Family section.) As I sit there in a fugue state, methodically ingesting one selection box after another, my nephews gather at my feet and gaze at me in wonder.

“It’s better than the zoo,” says my wife.

Of course there are other forms of fun. Board games are played with the four-year-old. Unfortunately, these end in the traditional fashion: with a tantrum and the board being upended. “Patrick, you’ve to stop being such a sore loser,” says my mother.

At a certain point it’s traditional for my siblings and me to start dividing up the family possessions. “How much do you think that’s worth?” asks my brother, gesturing towards a lamp with his calculator.

“We’re not dead yet,” chuckles my father nervously.

“Whisht or we’ll put you in a home,” I say, as I check the walls for subsidence.

At around 9pm there’s a knock on the door. “Is Patrick coming out?” says my friend from up the road. “Patrick, your little friend is here,” calls my mother.

Polite conversation is made with my parents, who instantly begin comparing me unfavourably with him. “See, Kevin’s mammy says he has to sit down at the dining table to eat, too.”

“Muuuum! I wanted to watch Doctor Who,” I say.

Stupid friend. Showing me up. We go for an aimless walk around the housing estate, but I come back because it’s cold. Everyone has gone to bed except for the four-year-old, who fixes me a martini.

On Stephen’s Day drinking wine at 1pm suddenly seems a little unwholesome. On the plus side I have bonded with the toddler, who’s not such a bad fellow, and as we sit side by side in our onesies, drinking from our sippy cups, I mentally plan a night on the town.

Since Cromwellian times, hostelries and pubs have upped their prices and ignored fire regulations on Stephen’s Night so that the masses can engage in booze-induced nostalgia with the people they hated at school.

“I always liked you,” slurs an old acquaintance. “Everyone said you were a little shit, and I made it my business to destroy you, but I always liked you deep down. We should go paintballing sometime. Why didn’t we hang out more in school?”

“Well, you were the headmaster.”

Many of my old school friends are here. Affectionately dubbed the “nerd herd” when we were younger, despite being pretty cool, we exchange business cards and discuss our high-flying jobs, trophy spouses and workout regimens.

I also meet the people who are very proud of never having left town, even to go shopping or to escape an environmental hazard. Conversations with them usually go like this:

“Well, look at who’s back from the big smoke, drinking out of a glass like a fancy gentleman. Gulping Buckfast out of an old boot not good enough for you any more, your lordship?”

“He’s like an Englishman. He probably calls this Boxing Day.”

“Yup. I guess our simple small-town ways must be a bit shocking for him, coming from Dublin, with all the highfalutin colour televisions, horseless carriages and such.”

“I heard he has four television stations – the BBC and everything.”

“What’s that over your shoulders?”

“A shirt? Well, la-di-da. Tis far from such things I was raised. I’m just a humble IT consultant like my father, and his father before him. Aye, nothing changes around these parts,” he adds whimsically, taking a puff on his clay pipe – before the anti-smoking lobby write in: it’s an electronic clay pipe – and glancing at his iPad.

Finally, it is customary in homecoming stories for some overlooked wallflower to have blossomed over the preceding year. Sadly, in Irish nightclubs the bloom on the cheek of a young ingenue is indistinguishable from the early stages of alcohol poisoning. So usually after a few drinks I assume that I’m the one doing the blossoming.

I laugh coquettishly, take to the dance floor and do all the new dances I’ve learned in the big city: the Macarena, the twist, the rock-the-boat, Kevin Bacon’s dance of anger from Footloose. Everyone is impressed. Time to go.

I ring home. They’ve all gone to bed except for the four-year-old. He drives over to collect me. Chris Rea is on the radio. Nice.