Don’t mind us: Jennifer O’Connell on the marvels of Hiberno-English

Here are nine words and phrases that only people from Ireland will understand. We’re great gas altogether 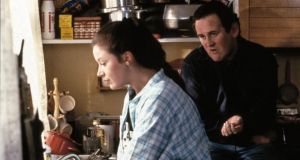 ‘As long as my children can quote at least one line from ‘The Snapper’, their Irish heritage is intact.’

Since I’ve been away from Ireland, there’s nothing I miss more – not even Superquinn sausages or spectacular winter sunrises – than the lyrical, versatile, sometimes side-eyed and very often bonkers beauty of Hiberno-English.

I’m not talking about the “begobs” and “begorrahs” embraced by American movie directors but never uttered in real life by a single Irish person. No, I’m talking about all the little, unshowy words that we quietly nicked from the English and made our own.

My children might grow up with Australian or American accents or some bizarre combination thereof, but as long as they know what a “press” is, are able to make sense of the following sentence “you’re no use, so you’re not” and can quote at least one line from The Snapper, their heritage is intact. With that in mind, here are nine words and phrases which, I have discovered, the rest of the world believes mean one thing, but we Irish know mean something else altogether.

Sorry: an American friend once told me that they thought Irish people were very humble, because they were always apologising. That’s because when an American – or an English person or an Australian – says “sorry”, they usually mean they are sorry. Out of the mouth of an Irish person, ‘sorry’ can mean anything from “get out of my way” to “I didn’t hear you” to “I’m sad for you”. It is rarely used to denote an actual apology, probably because we are seldom wrong.

After: Another little word with a multitude of useful applications, almost none of which is to do with the original English language purpose. “I’m after seeing her up the town”; “She was asking after you”; “What’s he after?” and my favourite, for its sheer logistical improbability, “Turn the light off after you leave”.

Hot presses and road frontage: The dual apogee of Irish architectural achievement. The White House, you say? Versailles? The Taj Mahal? Yeah, they’re all well and good, but do they have a hot press? Is there road frontage?

Chance your arm: When abroad, it’s best not to chance your arm, put it on the long finger, be on the pig’s back, or break the good delph into smithereens if you want anyone to have a bog’s what you’re on about.

None of your messing now: If you’re going to be interacting with children from other English-speaking countries, expect to have to relearn the entire lexicon surrounding discipline because all your references to boldness; messing; giving out; being cross; clips on the ear; all your exasperated “do I have to go in there to you nows”; and your dark warnings about the wooden spoon will be lost on them, and, depending where you are, might get you sued.

Gas: No, my American friends, this is nothing to do with petrol or flatulence. Confusingly, “great gas” is an expression of approval, but “you’re gas” is a passive-aggressive way of calling someone eccentric or mildly deluded, while “you’re great gas altogether” means “you are completely out of your mind”. For reference, the late Jackie Healy-Rae was gas, while Kim Jong-Un would be great gas altogether.

Shifting: aka throwing the gob, meeting, getting off with or scoring. It’s true: no one does romance like the Irish.

Roll: In America, a “roll” is a layer of fat around your midsection, a reference to the effects of an illegal drug or an expression of smug self-satisfaction (“That’s how I roll”). In Ireland, it’s what builders have for breakfast.

Finally, dear readers, a nudity-free hacking drama involving some of Hollywood’s top names we can all enjoy without guilt. Specifically, a series of leaked emails between Scott Rudin – the producer of the long-awaited and hotly anticipated (mainly, it seems, because it doesn’t involve Ashton Kutcher) Steve Jobs movie – and Sony Pictures.

If you always suspected that Hollywood was populated by whining, backstabbing, egomaniacal drama queens throwing epic strops at the slightest provocation – in other words, that it was no different to the average modern workplace – then you’ll be more than gratified by the exchange between Rudin and Sony head Amy Pascal.

Rudin, the producer of The Social Network, worked himself up into a rage earlier this year. The subject of his ire was Angelina Jolie and her attempted swiping of David Fincher to direct her in Cleopatra.

In an email exchange with the subject line “YOU BETTER SHUT ANGIE DOWN”, Rudin whines that Jolie is a “minimally talented spoilt brat”, “a camp event and a celebrity and that’s all” with a “rampaging spoiled ego”.

The beauty of the emails is that if you change all the names and substitute “David Fincher” for, say, “office stapler”, these are the same exchanges that are taking place on internal email networks all over the world. Same vitriol, same politics, slightly better-dressed cast.

Given that the whole thing has proven far more entertaining than anything Hollywood has produced for years, I hope they shelve both the Jobs film and Cleopatra and focus on a far more worthwhile subject.

In fact, I already know who should play Rudin. Anyone got a number for Ricky Gervais?