‘Direct provision is hell and nobody does anything about it’ 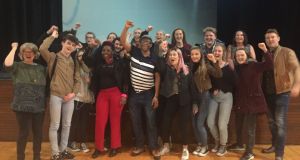 Students and teachers from Mount Temple Comprehensive School, Dublin, during rehearsals for their play about direct provision and the refugee crisis

I’m surrounded by about 16 fifth-year students from Mount Temple Comprehensive school in Dublin where I am a teacher. Most of them are about 17 years old and even though it’s the first week of their summer holidays, they’re rehearsing the next, and possibly the last, performance of Éire, Land of a Hundred Thousand Welcomes.

This is a piece of drama about direct provision and the refugee crisis that they co-wrote with their teacher, Laura Doak, a few months ago. Last March they performed it in at a drama festival in Malta, where they won an award for creativity and originality.

Now it’s June and they’re still performing the play. So powerful has the reaction been that they have had several requests to put it on in venues including DCU and Trinity College.

“I wanted to articulate the grief and rage some of us feel,” says Doak, who also directs the play. “In Ireland we are very proud of our reputation as a welcoming country. However, when you look at the way we treat people coming in to our country, this is patently not the case. I’ve listened to ‘nice’ people saying horrendous things about refugees. I wanted to address this. At the heart of drama likes the attempt to build empathy.”

It is no longer access to information which is important, it is our ability to evaluate and draw informed conclusions

So how do you address the refugee crisis in a piece of student drama and how can you ensure that it will successfully build empathy? Is it even appropriate to tackle these issues in classroom?

Prof Ann Devitt from the School of Education in Trinity College believes that it is.

“In our schools and our lives in general today it is no longer access to information which is important, it is our ability to evaluate and draw informed conclusions. School classrooms are safe environments where we can develop our critical skills and tackle the many controversial issues that beset the world, not shy away from them.”

And so instead of handing a script to the cast, Doak decided to make students develop their critical skills by delving into the issue of Ireland’s response to refugees and then using their reactions to create the final piece.

When the students turned up for their first rehearsal, they came with pieces of paper in hand. They had received an email a few days beforehand which asked them to “look at the experience of and attitudes towards refugees in Ireland, particularly those in the direct provision system” and to bring along any articles they had read about it.

Instead of learning and acting their lines as they had expected, students researched and explored the refugee crisis in Ireland

Student Eileen Sealy describes that first rehearsal: “We arrived, with our newspaper articles, and were waiting for the script, wondering what parts we would all get. But there was no script then or in fact for at least two months.”

This was because the script had not been written. It was still just an idea in their teacher’s mind based on the theme of inclusion, and its flipside, isolation. Over the following weeks, instead of learning and acting their lines as they had expected, students researched and explored the refugee crisis in Ireland by finding poetry and articles about the issue; by looking at images from various websites including Asylum Archive and then writing down their reactions.

“She would show us a piece about a refugee or a photo and we would try to imagine ourselves in that situation. Those responses were completely genuine. It was dead silent in the room and you could just hear the sound of scribbling [as everyone wrote].”

They also participated in workshops which involved role plays about coping with life in a new country as a refugee, living on a tiny budget in direct provision or by imagining themselves to be at a dinner table discussing refugees. They read the comments after online articles about people in direct provision and discussed them.

What the students didn’t realise was that the images, their writings, the poems, quotes and other material accumulated during this process were being compiled by their teacher.

The true power of the piece lies in the element of surprise. Like many good stories, this one has a twist

In fact the script (a very loose term considering the piece is a combination of so many diverse and multimedia elements) was only finalised a week or two before they performed it in Malta.

If it all sounds pretentious, it is. But it works because it’s self-aware art. And because it’s real. Almost all of the words used in it are quotes.

The true power of the piece lies in the element of surprise. Like many good stories, this one has a twist. Just when you’ve been lulled into a sense of security by the cheesy tourism advertisement that features at the beginning projected on to the back of the stage, the mood takes a sharp turn.

The 50-minute piece uses all the material from the two months of workshops to deliver and pack an enormously powerful punch. Dr Veronica Crosbie, of the School of Applied Language and Intercultural Studies in DCU, explains her reaction:

“Great theatre should take you out of your everyday thinking, shock and disturb taken-for granted assumptions: Éire: Land of a Hundred Thousand Welcomes does this to great effect . . . The play resonates as an excellent piece of cosmopolitan citizenship education, where critical questions are asked, self-awareness is evoked and a gesture of genuine welcome is made.”

After returning from Malta, the students performed it for the school community and after that they were asked to put it on in DCU in May, to an audience which included people living in direct provision.

Putting people in a mob makes you lose your sense of self . . . it takes away your individuality. It’s kind of scary how easy it is

One of the most harrowing moments of the play comes when the entire cast forms a mob, shouting obscenities toward the audience, who become momentarily a group of refugees.

“Putting people in a mob makes you lose your sense of self . . . it takes away your individuality. It’s kind of scary how easy it is,” says Aoibhe De Burca.

The response by those in attendance at the DCU performance was one of great emotion, as many people living in direct provision cried. Lucky Khambule, from MASI (Movement of Asylum Seekers in Ireland), summed up his feelings as he spoke to the cast and audience after the performance “You have given a voice to the voiceless”.

I ask the students about what they actually learned during the process. Their answers are impressive and they’re only short of engaging in a debate on Maslow’s “hierarchy of needs” when they try to explain why their feelings about the Irish system of direct provision.

“This system is so wrong . . . It’s harmful because although they have basic needs covered, that’s just not enough,” explains one student trying to articulate her anger.

Another agrees saying “Yeah, we didn’t want to get into the political debate. It was more about do you know this is going on in your country? We don’t talk about whether someone is a genuine refugee or an economic migrant . . . This is about the conditions they are living in – they’re . . . they’re inhumane. It’s the length of time they’re in there. If you’re fleeing a war, your main concern are your basic needs, of course. But after months, or in the case of some people in direct provision after seven years, it’s not your primary concern. They’re in limbo. In hell. And nobody does anything. Out of mind, out of sight.”

When I ask the students if they think it might be a little bit much for such young minds, I’m met with immediate disdain. “People think teenagers are idiots because when they were our age they didn’t have the resources we have,” says Emily Meehan. Fellow student Oscar Kilbride-Condon adds: “If you don’t teach these things in school you are preparing another generation of people who don’t engage with these issues.”

I ask the students what their involvement in this piece means for the future for them. “Of course it won’t change the world,” says Eppie Ní Dhiarmada “but we have a responsibility once this is over, when we finish rehearsing, that we go to marches, that we tell others about it. I think that’s really important that we don’t forget and become lazy.”

“Eire, Land of a Hundred Thousand Welcomes” will be hosted by The School of Education in Trinity College Dublin (funded by the Ubuntu Network) as part of an event in the Samuel Beckett Theatre, Tuesday, June 13th, 6.30pm. The 50-minute performance will be followed by a discussion about the teaching of controversial issues in the classroom. Entry is free but places are limited. Please email valerie.kelly@tcd.ie to request a seat.