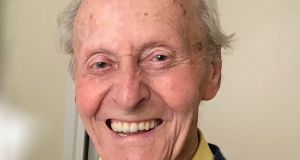 Geoffrey Medcalf had been so looking forward to getting the cheque from President Michael D Higgins on his 100th birthday. But, sadly, one of the longest surviving Irish veterans of World War II died just weeks after his 99th birthday.

Medcalf, who was born, grew up and lived most of his life in Dalkey, Co Dublin, was one of a small number of second World War veterans who was decorated by both the British and Russian governments for services rendered.

An apprentice electrician, he travelled to Belfast to enlist in the Royal Air Force (RAF) in 1940. “They weren’t going to accept me at first. The medical officer put a tape around my chest and told me to breathe deeper and I just squeezed in,” he recalled in a newspaper interview decades later.

Following his initial RAF training in Warrington, Medcalf had various postings in Cornwall and Scotland before being stationed in Iceland where his job was to help service the aircraft supporting the Allied Arctic convoys.

Between August 1941 and May 1945, 78 convoys involving around 1,400 merchant ships transported essential supplies from the UK, Iceland and North America to northern ports in the Soviet Union. Medcalf’s role as an aircraft mechanic was to service the RAF planes providing cover for these ships bringing civilian and military supplies to the Soviet ports of Murmansk and Archangel.

As is so often the case with ground crew, Medcalf felt that he had a “tame war” spent away from the front, with bacon and egg on Sundays. But his work on Mosquito and Beaufighter aircraft in sometimes extremely cold conditions was essential in supporting the war efforts of the Russian allies and supporting the sailors on their dangerous routes.

On a lighter note, he often recalled how the young Australian and American pilots had all kinds of commodities that hadn’t been seen in Europe since the outbreak of the war. Medcalf himself was allowed to send parcels of tea and nylon stockings back home when the former were rationed and the latter were as yet unheard-of.

In 2005 and again in 2010, Medcalf was one of five Irish veterans decorated by the Russian ambassador to Ireland with 60th and 65th anniversary medals of the Great Patriotic War of 1941-1945.

Eighteen months after the second World War ended, Medcalf was discharged from service and returned to Dublin. He remembered the postwar years in Ireland as very depressing, but he eventually got a job with Fuller confectioners as a sales representative. He travelled the length and breadth of Ireland checking the stocks of cakes and confectionary products in shops, and later took a job in a cash-and-carry depot until his retirement in 1986. He was a founding member of the Dún Laoghaire branch of Probus, the retired businessmen’s social club.

Throughout his long life, Medcalf was a prominent member of the Dún Laoghaire branch of the Royal British Legion. Savouring the comradeship of fellow veterans as well as the opportunity to help those in need, Medcalf held many senior posts at branch, district and national level. He was also a volunteer with the veterans’ support group at Leopardstown Park Hospital in Dublin and a member of the RAF Association. In 1989, he was honoured with membership of the Order of the British Empire for his lifelong service to the Royal British Legion and ex-service community.

The only son and third of four children of Norman and Victoria (Queenie) Medcalf, Geoffrey Medcalf grew up in Dalkey, Co Dublin. His father, Norman, was a partner in Beckett and Medcalf quantity surveyors on Clare St, Dublin. Geoffrey attended Kingstown Grammar School (later to become Newpark Comprehensive) and worked as an apprentice at Fryer’s Electrical from 1938-1940.

He married Jane Mackesy – also from Dalkey – in 1953 and the couple enjoyed many happy years together. Locally, they were renowned for hosting simple soirees or having friends around to their multi-purpose greenhouse, which was joyously named the shebeen. The sound of their banter, laughter and sheer enjoyment of life was infectious as it wafted over the neighbouring garden walls.

The shebeen was like a metaphor for Medcalf’s latter years which were affected by Jane’s and his own faltering health. The greenhouse was frequently damaged in storms, with bits of it flying over the wall into neighbours’ gardens, but Medcalf always managed to put it back together again and resume both its social and horticultural activities.

Following the death of his wife in 2017, he soldiered on, keeping in touch with fellow veterans and friends. During his last year of life in Our Lady’s Manor nursing home in Dalkey, he formed a wonderful friendship with Betty O’Connell-Jones which gave him a new lease of life. Days after his death, Betty made the epic journey home to Zimbabwe where she died in mid-February.

Geoffrey Medcalf is pre-deceased by his wife, Jane, and his sisters, Norma, Denise and Oonagh.