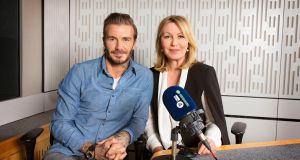 David Beckham has revealed he and wife Victoria used to have dates in restaurant car parks in the early days of their relationship in order to keep it a secret.

The ex-England captain opened up about his longlasting marriage to the fashion designer and former pop star in a wide-ranging interview on the 75th anniversary edition of Desert Island Discs.

He said keeping an open dialogue was the secret to their “strong family unit”.

Beckham (41) said: “We all know marriage is difficult at times and it’s about working through it.

“We know each other better than anyone knows us.

“We’ve got strong parents, we were brought up with the right values. Of course you make mistake over the years. Whenever we’ve come through tough times ... we talk.”

“We’re very respectful of our life. And when we do go through tough times we work through them as a family, as a unit.”

He said that when the couple first started dating they spend their dates in his “amazing bright blue” BMW in order to keep the relationship private.

“I drove down, I picked her up ... we used to sit in a Harvester car park and we just used to kiss, of course, and spend time together.”

The couple married in an extravagant ceremony in 1999, with Beckham cringing as presenter Kirsty Young recalled the lavish affair which saw the happy couple wearing purple outfits.

“That was bold,” said Beckham. “What was I thinking?”

The ex-professional footballer, who signed for Manchester United when he was just 16 and was part of the Class of ‘92 alongside Ryan Giggs and Paul Scholes, did not pick a single record from his wife’s Spice Girls discography.

He revealed he keeps all his England caps at his house and his “precious” medals in a safe in a bank.

Asked by Young if it competes with Victoria’s shoe collection he replied: “It does actually.”

Speaking about the current child sex abuse scandal in football, Beckham said: “There was never anything at Manchester United and it is disgraceful what has gone on and there has to be something done about it.

Beckham said it was humiliating, adding: “That was all it was, but that was just to teach us a lesson there was never any wrong-doing.”

The ex-footballer’s eight-disc choices included Every Time We Say Goodbye by Ella Fitzgerald, I Am The Resurrection by the Stone Roses and Si Tu Vois Ma Mere by Sidney Bechet.

His luxury item was his England caps and his book was the cookery book On Fire by Francis Mallmann.