Coping: St Patrick’s Day is nothing to be proud of but our feisty nation is

Our national day is not likeable, especially if you are teetotal, but I will celebrate our spirit 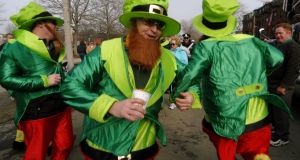 “St Patrick’s Day has very little to do with our collective identity.” Photograph: Angela Rowlings/AP Photo

This is a week to ponder Irishness in an already ponderous centenary year. The nation will wake up after St Patrick’s Day with a collective head sore enough to reverberate through the ages and give Pearse a headache.

Our patron saint’s day is not likeable. The streets are awash with squashed novelty hats and green puke. The sound of last night’s fisticuffs between some fella “from down the country” and a Spanish tourist dressed as a leprechaun still trills in your ringing ears. If you listen hard enough on St Patrick’s night, you can hear Yeats and Joyce spinning in their graves.

It is a day that has very little to do with our collective identity, being more about green beer and a Welsh chap stomping on the heat-loving reptiles that were apparently once so desperately attracted to our damp, cold island. I cope with St Patrick’s Day as all teetotallers without children do: by hunkering inside with a cup of tea.

There is a lot that is horribly askew in our country. This year in particular, we celebrate our independence by idolising a group of people who took up arms without a democratic mandate (or even majority support). If that happened tomorrow, we would call the rebels terrorists.

However, one can’t help but admire that indomitable spirit that is so integral to our nature. We have a history of endurance. We have undergone colonisation, depression, starvation and countless abuses of our identity. We have been denied the right to self-determination and been forced halfway across the planet only to be ostracised when we got there.

We have lived through loss, poverty and suffering. Our forefathers lived whole lives under one boot or another. You would think all that bashing and displacement would make us weak or bitter.

Yes, after hundreds of years of British occupation, we are still too afraid of authority to complain when we are served undercooked meat in a restaurant. And yes, we kowtow to celibate men in funny black outfits as they give us life advice from an institution that operates with all of the fast-paced modernity of a medieval loom. But what we have done with our history is quite astonishing.

Our diaspora is incredible, considering how small a nation we are. From our rain-battered island we have streamed across the world, being reviled as immigrants before earning a reputation as hardworking, warm and lovable. Irish people are the world’s friendly neighbour with a wry wit and a tender heart.

We are all protective of that label of Irishness, but there are Irish people who have never set foot on our spongy green ground. Irishness is an attitude, a sense of adventure and pride, a feeling of community, a willingness to resist together what we are not powerful enough to fight alone. Irishness is the winsome sadness in a heart that has been trampled and the love of a faraway land. It is poetry.

The Duke of Wellington is credited with this quote, and even though he probably didn’t say it, it is particularly appropriate: “If a man be born in a stable, does that make him a horse?” Being born here is a sufficient condition for Irishness, but not a necessary one. There are Irish households across the world, mammies hiding the good biscuits in case visitors come. Children bashing sliotars against walls.

What is wrong with us? We drink too much. Our state is grounded in a religious ideology most of us don’t practise. We have a history of creating a hostile environment for our best and brightest so that they feck off, and rather than rewarding hard work we begrudge those who reap its benefits rather than celebrating them. But we are like any people who have suffered historical wounds. We have a long memory and a wish to better ourselves. I’ll (tea and) toast to that.