‘Christmas is so much a feminine time. There’s no blood or aggression’ 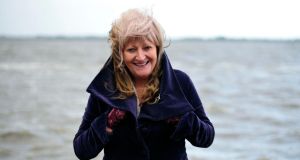 Nóirín Ní Riain: “I was always obsessed with listening. The one who sings prays twice.” Photograph: Aidan Crawley

Advent, Christmas and the Epiphany make up the best part of the year, according to the spiritual singer, theologian and scholar Nóirín Ní Riain. “It’s so much a feminine time. There’s no blood, aggression and viciousness, and faith is about birthing God in ourselves,” she says.

You couldn’t find a more peaceful spot than her cottage in the grounds of Glenstal Abbey, in Co Limerick, to cherish the shortest days of the year, their fading light filtering through enormous oak trees barely holding on to their last autumnal leaves.

“My heart is at home here. I grew up six miles from here. It is a few minutes’ walk to the church, and I’ve red squirrels and deer nearby.”

Ní Riain has decorated her home – the fourth cottage on the estate that she has lived in since moving here, in 2005 – with warm-coloured soft furnishings, prints, paintings and icons. An upright piano stands near the stove, and there is a feast of pattern on everything from cushions to tea cups.

The Christmas decorations aren’t up yet, but Ní Riain speaks about her love of the symbolism associated with purple, “the liturgical colour of Advent” and “the first colour to be dyed, in 1500 BC”, she says. “Purple comes from red (the colour of the Holy Spirit) and blue (the colour of Mary), and it’s also the colour of the throat chakra, which is the chakra of self-expression and finding your voice.”

Best known for her ethereal soprano voice, Ní Riain is also a fount of knowledge about religion, traditional Irish songs and spiritual music from all over the world. She was the first woman to sing Gregorian chant with the Benedictine monks of Glenstal Abbey and has sung at UN earth summits, at world peace gatherings and in war-torn regions.

As well as lecturing on the master’s course in ritual chant and song at the Irish World Academy of Music and Dance, at the University of Limerick – her former husband, Mícheál Ó Súilleabháin, is the academy’s founding director – she leads workshops at Glenstal Abbey.

Next Saturday she will host one on whether Christmas has lost its true meaning. The day-long event will explore poetry by Máirtín Ó Direáin and her late friend John O’Donohue, who died in 2008. She will also celebrate Christmas carols, traditional Irish songs and religious paintings.

“It’s about retrieving the real meaning of Christmas, retrieving the colours, smells and sounds of pieces like Adeste Fideles” – aka O Come All Ye Faithful – “and Stille Nacht, or Silent Night, which was sung in the German and English camps in 1914.

“The Kilmore Christmas carol tradition in Co Wexford will also be explored, and participants will join in a festive lunch and visit the Icon Chapel at Glenstal Abbey. I’ll sing, and people can join in if they wish. You never know what talents you will have at these workshops.”

Ní Riain, who often breaks into song to better explain what she is talking about, likes “this time of decay and lighting candles as the sun is diminishing. It’s a very intimate season, as opposed to summer, when everyone is out and it’s noisy. It’s a time for interiority and minding yourself, being together and being with yourself. It’s a great season for facing death and for listening carefully – ob audire, from which we get the word ‘obedient’.”

Listening carefully is as important as singing for Ní Riain. In her doctoral thesis she developed a “theology of listening” that she calls theosony.

“I was always obsessed with listening. The one who sings prays twice – Bis orat qui cantat – which is an expression that goes all the way back to Socrates. To which I add Bis orat qui audit: the one who listens keenly prays twice.

“Something is heightened when it is put into song. It’s a healing thing. ‘Attend with the ear of the heart’ was also the first rule of St Benedict.”

Some people may know Ní Riain better through her sons, Owen and Moley Ó Súilleabháin, who perform as Size2shoes, and with whom she has recorded numerous times, including on the CD Celtic Joy: A Celebration of Christmas. Now based in the United States, they will join her for Christmas.

Moley Ó Súilleabháin will help at the workshop, and mother and sons will perform with Mark Patrick Hederman, abbot of Glenstal Abbey, at the Hunt Museum, in Limerick, next weekend.

Ní Riain is already planning her workshops for next year. Rooted in Catholicism yet open to those of all religions and none, she will continue to focus on the spiritual essence of our lives through these celebrations of song, music and silence.

See theosony.com and glenstal.org for more about chant days with Nóirín
Ní Riain; Celtic Joy is at soundstrue.com