Caitlin Moran: ‘Having 4% battery left on your phone: that’s how it feels to be poor’

Moran has a lot to say. She talks about her skill for monologues, the reason she is annoyed about Brexit, and the great advice she got from Courtney Love 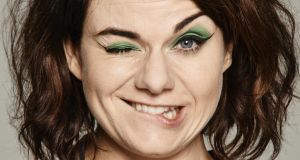 Caitlin Moran (40) is a British journalist and author of books including the bestseller How to Be a Woman, which served as a rallying call to a new generation of feminists. Her latest book, Moranifesto, is a collection of newspaper columns and new writing covering topics as diverse as the appeal of Benedict Cumberbatch, hipsters, abortion rights and why the internet is like a drunken toddler.

She was raised on benefits with seven siblings in a council estate in Wolverhampton. Her father is of Irish extraction. Her novel How to Build a Girl is being made into a film, and there is talk of an American remake of her acclaimed Channel 4 sitcom, Raised by Wolves. She lives in London with her music journalist husband, Pete Paphides, and their two daughters.

Making my sister point the garden hose at my genitals while I shouted “more, more, more!” (I started quite early.)

Trait you inherited from your mum?

Trait you inherited from your dad?

Getting very drunk and going on big monologues about changing the world and then seguing into something very specific on a record, for instance a solo played on a hi-hat using only the left hand.

To what do you owe your Celtic heritage?

You were known for a badger stripe in your hair. Why did you get rid of it?

I was getting recognised too much, and the kids were getting annoyed that every time we walked down the street, girls with eyeliner would come and cry and hug me. And my kids were like, “Mum, we just want to go and watch The Martian. Will you cut your hair off and get rid of your stripe?”

What did being raised on benefits teach you about politics?

Everything, but the key thing being that, contrary to what my dad told me, I discovered the rich or the people who might take away benefits aren’t evil, they are just blithe instead: they genuinely don’t have a concept about how dropping 10 quid a week from your budget could just tip you over the edge, because they’ve never felt that.

Recently I described to someone who is very rich and privileged who worked government who didn’t understand what it means to be poor. I told them, “You know how you feel when you only have 4 per cent battery left on your iPhone? That’s how it feels like to be poor. You are constantly very anxious that it’s going to run out and you are very far away from your charger.” They said, “Oh, I get it now.”

Last night. I was at a signing where I meet these beautiful girls and they tell me amazing stories. And there was one woman who told me her 16-year-old friend had her life changed by coming to see me live last year. She’d come from a very bad background and she’d gone to college, and she now writes herself, and it was just simply from seeing me talking last year and giving her permission to be the kind of girl that she wanted to be. I cried tears of joy.

The quality you most love about yourself?

Smoking. I do enjoy it.

Back to the monologues at 3am. I wake up afterwards with a hangover in post-rant shame, telling myself: if you’d cut the last hour and half of what you were saying, that still would have been a pretty chunky speech, Cait. Why don’t you just minimise your chat next time?

Best advice you ever got?

From Courtney Love when I was 16. She walked in the room, she didn’t say hello or “I’m Courtney Love”, she just said, “Caitlin! I used to be as fat as you when I was your age. The secret is . . . don’t eat cheese.”

There is a different one every day. So this morning I’ll give you three: Emma Watson, who is doing the He For She campaign for the UN, which I’ve been helping her out on. And when we went for cocktails to discuss it I told her I loved Gloria Steinem’s glasses, and the next day she biked me a pair of Gloria Steinem’s glasses. The fact that we live in the 21st century where Hermione from f***ing Harry Potter is fangirling over Gloria Steinem’s glasses with another feminist and we buy each other feminist accessories makes my heart sing. Then Dr Kimberlé Williams Crenshaw was on Woman’s Hour this morning, talking about intersectionality and just sounding like a badass. So those three women.

Best thing about being a feminist in 2016?

We are not being burned at the stake as witches. Yay!

Worst thing about being a feminist in 2016?

That 98 per cent of the stuff that we need to be happy still needs to be done. Boo!

How did you feel hearing the news of David Bowie’s death?

The Siddiquis from Gogglebox. I love them so much.

What do you always carry in your handbag?

When Tom Hardy joined Twitter I was allowed, because of the nature of Twitter, to just talk to him repeatedly. I was allowed to address so many comments to him that two days later he left Twitter.

That I have made Tom Hardy leave Twitter. Well done me.

What can we all learn from Doctor Who?

I have been trying to watch Happy Valley now for four weeks, but every time I sit down to watch it my children come in and I know it’s probably unsuitable for them to watch it so we have to sit down and watch the f***ing Kardashians instead. And we get to see their happy valleys. There’s so many bum shots in that show, Christ alive.

Two books: Paul Mason’s PostCapitalism which is just amazing, looking at trends in the economy and going, ‘Well, as things are going we are actually going to have to have to come up with a new way to run economies.’ And Gillian Tett’s The Silo Effect; the most fascinating thing in it is explaining why Google and Facebook are becoming the most powerful places on Earth. It’s because they run themselves differently to any other organisation. If you wanted to form a new political party, which I do, you should read that book because it will tell you how to make a successful one.

PR for the win, because with first-past-the- post the reason people don’t vote as much any more is because you have to guess which parties to vote for in certain areas: you have to vote tactically. With PR you can literally say, “This is the party I support and therefore I will vote for them”, so it stops people going mad.

I am annoyed because that was basically an internal problem for the Tory party.There was a small right-wing section of the party that wanted to leave the EU that David Cameron couldn’t discipline, and instead he’s gone, “Okay, we’ll have a referendum instead”, and kicked the problem out of his party and on to a nation. This means I now have to give a shit about Brexit. I am very busy! I am trying to put a whites wash on and I still haven’t watched Happy Valley. Do not make me read about EU finance.

Why does everyone need a manifesto?

Because the poli in politics and demo in democracy mean people, and that is what we have lost from politics. If your child came down the stairs now and said they wanted to be an MP, you would look at them as if they’d come down stairs and said, “Mother, I want to be a massive pervert.” Good people don’t want to go into politics any more, and that is bad for us. Once we all start talking about politics again, which starts with writing our own manifestos and saying, “Hey, what would I do if I ruled the world?” that starts the conversations and changes the tone, and makes people want to go back into politics again.

Fast Donnybrook flip with all the work done for €625k
10