Built to last: at home in Ireland’s first ecovillage

Ultra-modern, durable, energy-efficient homes that are innovative and funky is only part of what the Cloughjordan project is about – it’s also about building a resilient, vibrant community 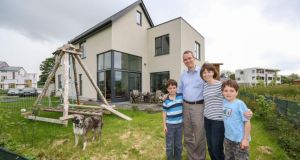 Deirdre O’Brolchain, her husband Eoin and sons Ruairí and Senan at their home in the ecovillage in Cloughjordan, Co Tipperary. Photograph: Brian Gavin/Press 22

Alternative living, intentional community, commune – whatever images these terms evoke, this village is something else. A scattering of ultra- modern, energy-efficient homes, built in innovative, funky house designs, connect across the rural landscape of north Tipperary.

All the homes are constructed according to an ecological charter. They are built to last and capable of weathering the storms of an uncertain future. They have also cut the average annual heating bill to only €247. They use the latest technology and know-how, as well as the best building materials, to make houses that use resources efficiently throughout their lifespans – from choosing the site to design, construction, operation, maintenance, and renovation right through to demolition.

“This whole project is designed for resilience,” says Peadar Kirby, an author on climate change and professor emeritus of international politics and public policy at University of Limerick, and a resident of Cloughjordan. “My very strong view is that this is an immensely successful project. And the relevance of what we’re doing here will only be known in years to come.”

Cloughjordan recently won the award for Greenest Community in Ireland for the third year running. And in 2013 the ecovillage took the gold medal for what’s known as the “Green Oscars” – the International Awards for Livable Communities, or (LivCom.

Ireland is in the throes of another housing crisis. Conventional housing is wasteful. If Cloughjordan is a viable model for a new, resilient Ireland, capable of facing whatever the future has in store, why is it not being considered as a working template as we prepare to build again?

“Because the world’s gone mad,” says Philip. “The financial meltdown hit us hard. People want to move here but they can’t sell their homes in other parts of the country. So we’re asking the same question as many others in Ireland: how do we get out of debt? But relatively speaking, we’re thriving in this crisis – and because of it.”

Kirby believes that, “as the climate- change crisis really kicks in and grabs people’s attention, we will see an upturn in site sales.”

Many of Cloughjordan’s residents are less concerned about the current financial situation than about other impending crises.

“Phil Hogan’s climate change Bill is a disgrace,” says Kirby of the Minister for the Environment’s recent policy on Ireland’s commitment to reduce carbon emissions. “It shows no leadership. Are we as a nation going to offer any leadership? How do we get to a low-carbon society by 2050? That’s what the scientists are screaming at us.”

Scientists are not the only ones screaming. Mary Robinson, the former president and founder of Climate Justice, recently said that we have “at most two decades to save the world”.

And Brian Hayes, the Minister of State at the Department of Finance, said at this year’s Office of Public Works conference in Dublin Castle on flood-risk management that “the political system needs to grow up. Politics in Ireland is very local – it’s equally very short-term. We are not good at planning for the long term and having to make tough choices, especially when it comes to good planning and development. If ever we need a national response, it is on this issue.”

Not all smiles and easy living

John Jopling, a retired London barrister and part of the Cloughjordan initiative, believes it is important for the community to be resilient as well as the village’s infrastructure. “Resilience is about facing what comes down the line, and as a community we are much better prepared to do that.”

But being part of such a community is not all smiles and easy living. Bruce Darrell is a young family man, a Canadian architect turned devoted food grower for the Cloughjordan community. “The crisis facing us is too broad,” he says. “New people come here and have different ideas of what is most important. Some don’t see the need to build resilience – they’ve come here for an easy life in the country, and that’s fine. But others are desperate to cultivate a biodynamic farm capable of feeding the entire community in the face of a major global food shortage.”

“We have a lot of retired and semi-retired people, and their view of the world and life is much different from a young person’s,” says Darrell. “We have nobody aged 18-25. They can’t afford to build homes or support themselves here. We need young people. We need a broader demographic.”

Philip agrees: “Diversity is key for a healthy community. We need people with all sorts of skills. The softer skills of empathy, compassion and understanding are as important as the harder skills of engineering and bio-farming. If the group dynamics aren’t working, nothing is working.”

Everything must be decided by consensus, which is a major challenge.

“It takes a lot more work,” says Deirdre O’Brolchain, the mother of two young boys and the former chairwoman of the Ecovillage Service Company. She moved with her husband to Cloughjordan in 2010 from suburban Dublin.

“Consensus is more about hearing everyone; once everyone has been heard we can make a decision. You can’t just block a proposal – you have to work on a counter-proposal. So we’re a learning community – learning how to get along, learning how to overcome conflict – and what a rich learning experience it is,” she says.

“I also have to learn to keep the balance and not get completely consumed by the project,” she continues. “We’re just a lot of regular Joes. My husband works 40 hours a week not related to the ecovillage. We have relatives and dependents in Dublin. We’re still private citizens. This place doesn’t define us.”

People come to Cloughjordan for different reasons; they have different goals and don’t always agree on the ecovillage’s purpose. Jopling quotes loosely from his book Gaian Democracies, which he wrote with Roy Madron: “Without a deeply held, commonly shared purpose, shared ethical values and beliefs that all may trust and rely upon, communities steadily disintegrate.”

Kirby takes up the theme. “We fight, we hurt each other. But there is a real element of community and purpose. The quality of our community support is at the heart of resilience.”

He tells the story of a woman who has not been living in the ecovillage very long, and who did not know many people when her husband became ill.

“She doesn’t drive, yet every day she is taken the 20km to a nursing home [to visit him]. People are giving money they don’t have. People step up to the mark in all sorts of ways. I consistently see support given on a personal level. That inspires me. This is true resilience.”