Bressie: 'Sobbing uncontrollably is liberating ... and so is admitting you are vulnerable'

How to be a Man: Patrick Freyne talked to Niall Breslin (Bressie) about masculinity, crying and the pressure 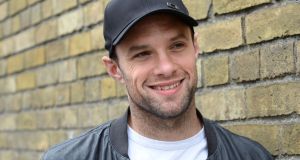 The feminist movement has opened an awful lot of avenues for discussion. Men have to go ‘right lads, we have to have a bit of a chat here as well.’ I think some men feel ‘We’ve nothing to discuss. Everything’s great.’ It’s not. Masculinity is all over the place. Photograph: Dara Mac Donaill

What did masculinity and manliness look like when you were younger?
I think it’s changed dramatically for the better, but when I was a kid being a man meant being absolutely animal tough. It was BA Baracus, Chuck Norris, the guys that would head-butt walls.

And were you tough?
I was able to act that way, but I didn’t feel it and that’s very confusing. Especially among your peers… One of the big issues we see here in Ireland around mental health is acting a certain way around your peers to fit in. It has a huge impact. When I was growing I played all the sports. I did everything that made people not think that there was something up with me.

Was that sporting world a macho one?
I played GAA and rugby and they were actually different types of macho-ness. In the GAA it was ‘you can’t let your community down they’re all there to watch you’ and that played on my head a lot. Whereas rugby, funnily enough, wasn’t as macho. It didn’t have that same pressure of representing your community and your family and your friends.

How have things changed with masculinity?
I suppose the most liberating thing among my friends is they start admitting they are vulnerable and that they’re not invincible. As soon as you’re able to admit that, that’s when you show real strength and that’s the irony of the whole thing. Twenty years ago it would have been seen as a weakness and it’s not anymore.

There’s a documentary on Netflix that just blew my head off. It was called The Mask We Live In and it was about masculinity and how masculinity nowadays is defined by your sexual conquests, your economic wealth and your hardness. And I thought - that doesn’t represent me. It doesn’t represent any of my friends and I don’t want people thinking that it does.

Is it difficult for men to talk about their feelings?
People say ‘Oh, women are a lot better at speaking about their feelings.’ I don’t fully buy that. Women will talk a lot more about surface issues but [to] get really deep with anybody [male or female] it’s very difficult.

Did you find it difficult?
When I was struggling massively with anxiety, my biggest issue was not having the language to even describe it. I thought I had asthma because I couldn’t breathe… A young person in today’s society would go ‘that’s anxiety.’ And really, now that I have the language to describe this, I no longer feel that if I say it out loud I will be massively judged. And it’s hiding it that causes the damage. When you actually address it, when you talk and get support and get access to care, you realise it’s never the mental health issues that are hard, it’s the excuses you have to make for them, to disguise them, and the energy that takes. I think that’s something I learned probably 15 years too late.

How has feminism affected your life?
I was brought up with my three sisters and my mother. My brother left when I was five or six to go to college and my dad was in the Army so he was overseas for most of my childhood. So I have a very strong healthy, respectful relationship with my sisters and I think they taught me a lot.

[Because of] the feminist movement there’s been so much more dialogue and conversations. I’m really enjoying that we’re having harder conversations in Ireland. We’re not doing the head in the sand crap that we’ve been doing all of our lives

We’re pulling our heads out of our arses and going ‘right this mightn’t be an enjoyable conversation. There might be a bit of a conflict, but we have to have it,’ because the alternative no longer is viable in Ireland. And we are we’re having it and there are people leading that and it’s really important

The feminist movement has opened an awful lot of avenues for discussion. Men have to go ‘right lads, we have to have a bit of a chat here as well.’ I think some men feel ‘We’ve nothing to discuss. Everything’s great.’ It’s not. Masculinity is all over the place.

How is your life different from your father’s?
I couldn’t imagine the world he grew up in, but there wasn’t much difference between the sixties and the eighties and nineties when it came to men and mental health. I remember when Kurt Cobain took his own life. Everyone in my class was obsessed with Nirvana. We were in a Christian Brothers school, and I remember asking the priest why Kurt did it. He said ‘because he was a coward.’ That broke our hearts.

Did you ever see your father cry?
No. I think that was one thing with having an Army officer father. He could be going away for 12 months and he’d be picked up at five in the morning by the Army guys to go off to Israel or Kuwait and I remember feeling this was weird. I feel sad but I can’t show it and you could see he felt that way too. Kids have an unbelievable ability to feel an energy. If there’s an energy in a room, If someone is sad and upset, they know it. And I knew it. And then he’d go away and he’s gone for a year. Why aren’t we crying?

When was the last time you cried?
I cried when I finished the Iron Man…. I went to watch the Iron Man in Copenhagen two years ago, to support a couple of friends, and that was my last acute attack of depression, where I literally couldn’t get out of bed. I had to drag myself out of bed to barely support these people.

And it felt amazing. It wasn’t because I finished. The fact I was able, and the journey I’d gone on, I didn’t give a shit what anyone thought of me. And when you watched, everyone who came over that line sobbed. Everyone had a story. They all had their own reasons to do it. They all had their family there who went on that journey with them

And I’m still getting over it, the idea of sobbing uncontrollably - it was so liberating.

What’s your position on repealing the Eighth Amendment?
My entire world revolves around the emotional welfare of people and from that point of view we shouldn’t be letting women go through that. Women in this country shouldn’t have to deal with [having to travel]. It’s hard because we’re very egocentric. We can’t see the world outside our own eyes but every family could be affected by this. Every woman, every man could be affected by this. Too many people are being put in those situations and we have a responsibility as a society to engage with it and see what can be done.