Benefits Street: the controversy rages on

Is Channel 4’s contentious documentary crummy and misleading or a programme with benefits? 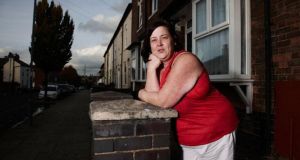 I landed back in my home city of Birmingham the day before the first episode of the now-notorious Benefits Street, aired on Channel 4. I didn’t watch it – I was surrounded by enough Brummie accents already. I did, however, take a trip through the Bull Ring (now rebranded around the cool blue lump that houses upmarket Selfridges), where some enterprising person nicked my phone.

It was three days later, back in Dublin, when I watched the first episode. By then the complaints had started. The last episode of the fly-on-the-wall documentary about the reality of life on one of Britain’s most deprived streets – James Turner Street in Winson Green – is on tonight. So far there have been more than 1,700 complaints about the series. The people of Birmingham can talk of little else. Some residents of less-harangued areas have taken to driving over to the street at the weekend for a gawk. It is the new West Midlands Safari Park. The watchers are staying in their cars here too.

Former Birmingham MP Clare Short says the show is “crummy and misleading”. Short, the former UK secretary of state for international development, has said the show is an excuse for “viewers to judge and sneer”. Short was MP for Ladywood, the Birmingham constituency where the TV series is set, for 27 years, and she grew up nearby. She is also, like Benefits Street matriarch White Dee (real name Deirdre Kelly), a second-generation Irish Brummie. We get everywhere.

Carole Malone, acerbic columnist with the Daily Mirror, is having a conniption that someone from circumstances as inauspicious as White Dee’s could become a television star. Malone branded the mother of two “feckless” and has not been best pleased by reports of people asking Dee for her autograph. Rumours that Dee is being lined up for an appearance on Celebrity Big Brother, with its quite substantial fee, will no doubt give Malone more than a touch of the vapours when she gets wind of them.

Of course, Benefits Street, with its five million viewers, is attracting cross, cross-ideological ire. Left or right, no one wants to see the poor, dysfunctional and dispossessed on prime-time TV.

“How edgy Channel 4 must think it is, courageously reinforcing widespread prejudices, heroically hammering away at a message that is heard relentlessly already, bravely echoing the government mantra about skivers,” wrote Owen Jones, author of the excellent Chavs: The Demonization of the Working Class.

Of course, Jones is right. The British population is hugely out of step with the facts about those claiming benefits. Polls show that people believe that 27 per cent of social security payments are lost to fraud, when in reality the figure is just 0.7 per cent. The British public think that 41 per cent of GNP goes to unemployed people, when it is just 3 per cent. The same myths abound in Ireland, with wild over-estimations of the amount of social welfare actually paid out to claimants. Misinformation is borderless.

In Benefits Street, the average unemployed person without dependents gets just over £50 a week. It is too little to live on. Stephen Smith (aka Smoggy), a father of two who is known on James Turner Street as “The 50p man” because he sells tiny amounts of essentials such as washing powder to residents, has seen his role as the kindest, most compassionate person on the show rewarded with the offer of a full-time job as a delivery driver. He deserves it. That probably wouldn’t have happened without Benefits Street. So not all bad then.

From across the ideological divide, the show’s critics may make some valid points, but commenting from the inside is a different beast. I talked to some people on benefits in Birmingham (some of whom might or might not be related to me), and they were bamboozled by the appeal of the programme. But they are still watching it. Most commonly, they were upset by the dysfunction and lack of cleanliness in the houses. People such as Fungi, Benefits Street’s resident drug-user, with his non-functioning electrics and unusable bathroom, were never going to pass their muster.

Of course, people such as Fungi are hanging on by their fingertips after a lifetime of abandonment by a system that is meant to support him. A domestic car crash is inevitable. But when you are worried that the ill-informed, TV-watching population might think that behind the doors of your council house there is a filthy mess, or when you are worried that your children might suffer the taunting of unreconstructed, ignorant classmates, this matters. It really matters. No television programme, even one for generally progressive Channel 4, made by the ironically named Love Productions, should do that.

One contact on benefits in Birmingham, but not on “The Street”, doesn’t think the programme has changed anything. “I don’t think anyone’s had an epiphany over it. I actually think it has galvanised both sides. The people who think that people on benefits are scummy still think so.”

A positive thing, though: “there’s a strong idea of community in James Turner Street, regardless of race, creed or colour, which is nice. They’re all there for each other.”

So, a job for Smoggy; a place on Celebrity Big Brother for White Dee; a sometimes-positive statement from a community striving to survive against huge odds: there are some benefits to Benefits Street, it seems.