Behind the News: Kevin Woods, the leprechaunist 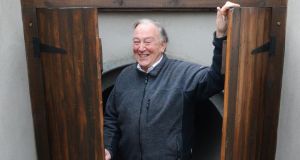 Louth county council has granted Kevin Woods planning permission for a ‘leprechaun cave’ which he has built on his own land in Carlingford. Photograph: Ciara Wilkinson

As former sales manager at the PJ Carroll cigarette factory in Dundalk, Co Louth, Kevin Woods is well versed in selling. So when a publican in his native Carlingford claimed to have found leprechaun bones and four gold coins on nearby Slieve Foy mountain, Woods saw a perfect opportunity to draw more visitors to the medieval town.

“I put £1,000 under four ceramic leprechauns and sold leprechaun-hunting licences for £10 each. I covered my costs with the numbers of people who bought them,” Woods says.

That was in the pre-millennium days, and Woods has since worked hard to develop people’s interest in folklore through self-published books and tours of the area. His “leprechaun cave” is the latest of these.

“I use the cavern as a medium for telling the stories of the area. There are two tunnels from the cave, one of which goes to the Fairy Glen in Rostrevor, on the other side of Carlingford Lough, and the other of which goes under Carlingford to Slate Rock, where the leprechauns live,” he says.

Thelastleprechaunssofireland.com, Woods’s website, is full of local myths about Fionn mac Cumhaill, Cúchulainn and the Táin Bó Cúailnge (or Brown Bull of Cooley).

He says he even managed to get the leprechauns “protected” under the European habitats directive, which protects threatened flora and fauna. He built the cave on his own land along Carlingford Lough, receiving retrospective planning permission this week.

“I was afraid I wouldn’t get planning permission, but really I built it to tell stories. Most people come to me from TripAdvisor reviews.”

Woods most enjoys telling his stories to children. He says that he gives them a long view of history, geography and mythology.

Accusations of paddywhackery don’t bother him. “Fifty per cent of the people like it and 50 per cent don’t. Locally, it’s a case of not being recognised as a prophet in your own land. But some people see the benefits of tourists coming and spending money here. It’s my retirement project, really.”

Woods also organises an annual leprechaun hunt on Slieve Foy. “I put 100 leprechauns on the mountain with a total of €2,000 under them. People pay €6 for a licence to hunt them, and the money goes to local charities and Our Lady’s Children’s Hospital, in Crumlin.” More than 3,000 people joined the hunt last year.

And to those who don’t believe in leprechauns? “I offer any begrudger a free trip to come down, and if they are not satisfied, in that they leave without a sense of history and storytelling, I’ll give them a free meal in the bistro in Carlingford.”