Barefoot foraging for wild herbs in Bavaria? Why not

Wandering through the foothills of the Alps, picking weeds to eat, is more fun than it sounds 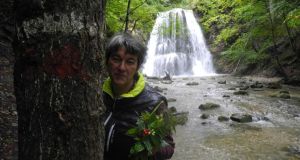 There was a time in Ireland when going barefoot and eating weeds would have indicated poverty, desperation or both. These days, foraging for food is as much an indication of social status as sirloin steak used to be. Indeed, if you are a chef with your eye on a Michelin star, you must serve wild food and the weirder the better.

And, in case you hadn’t noticed, all the really cool people go barefoot now, including Galahad Clark, a descendant of the famous Clark shoe family and the founder of Terra Plana (now Viviobarefoot), one of many companies producing “barefoot” shoes for walking and running, which basically make you feel as close to the ground as possible by using super-thin soles with no support. Indeed, cults have sprung up around the barefoot craze and people do organised barefoot events on city streets from New York to Tokyo.

So, naturally, when offered a barefoot herb-foraging holiday, I ripped off my tired old trainers and jumped at the chance to get hip and healthy.

Germans are known for being ahead of the game when it comes to “wellness” holidays, and this trip was organised by a company called Alpen Club, which has a collection of Alpine resorts offering mainly hiking, skiing and winter sports.

We were in the Alpen Club in Schliersee, which is a flower-festooned fairy-tale village in the foothills of the Bavarian Alps. There I had arranged to meet Christiane Viehweger, a certified herbalist and barefoot enthusiast who would escort me on my hike, pointing out and picking edible plants along the way. She would then show me how to cook and eat them.

I did worry that Viehweger might be one of those ferocious eco-fascists who bully everyone else into being as eco as they are, and that she would frog-march me and my freezing feet over miles of mountain and yell at me until I collapsed in a blistered, whimpering heap.

You can imagine my relief when she turned out to be a soft-spoken, sweet-natured woman. She had us ambling along at such a gentle pace that I worried we were not getting enough exercise to counteract all the food we had for breakfast, because the Alpen Club had also surprised me by offering an exceptionally enormous buffet, which lasted until 11am.

The barefoot thing was troubling me, though. The weather was chilly and it had rained all night. After about 20 minutes of ambling, Viehweger suggested that anyone who wanted to could try a bit of barefoot hiking, but only if they felt inclined to, and only on the grass, not on the nasty stony path.

Feeling enthused by her attitude, I took off my boots and took an experimental step. I narrowly avoided a cow pat.

“The shepherds often stood in cow pats to warm up their feet,” she told me. I decided not to emulate them. The earth felt warmer than it looked, and sensual to the touch. My feet felt unfettered and light, and it was rather fun.

The barefoot society guru, Dr Lorenz Kerscher explains that the many benefits of bare feet include better alignment, because the body naturally works the foot muscles in the way that nature intended, leading to better posture and a lack of foot problems such as bunions, corns and blisters, which he claims are actually caused by shoes.

After walking for about an hour, during which time we were introduced to edibles including nettles, rose hips, elder leaves and berries, St John’s wort, red clover, horse mint, and wild marjoram, we retired to Viehweger’s outdoor kitchen, where she gathered us around a bunsen burner and made flower pancakes, nettle tempura, elder pesto and wild-herb butter, all of which were utterly delicious, especially the nettle tempura. She also plied us with a strong elderberry liquor, which she had made earlier.

With foraged food, presentation is everything, as is the atmosphere in which you consume it. Viehweger’s weeds were presented artfully and prettily. But to further enhance my memory of them, I was treated to a range of activities, including an electric-bike tour around the lake; a cable-car ride into the Alps; a visit to the Hasenöhrl Hof, a 16th-century Bavarian house; a traditional dessert; and an opportunity to try on traditional dirndls.

All of which has made me think glorious, happy thoughts whenever I look at weeds. I will never again see a stinging nettle without picturing strong men in lederhosen.

Information on Christiane Viehweger’s tours at wildkraeuterkuchl.de. The tour is in German but the hotel provides guests with a translator. More about barefoot foraging at barfusspark.info/en