Artist whose photographs captured the lives of the homeless and forgotten 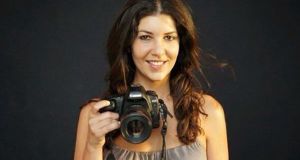 Leila Alaoui: the photographer, whose work has been shown in Paris, Dubai and New York, died aged 32 following a terrorist attack in Burkina Faso. Photograph: AFP/Getty

Leila Alaoui, who has died aged 32 following a terrorist attack, was a French-Moroccan photographer whose beautiful images chronicled the themes of migration, cultural identity and displacement.

Alaoui was wounded after gunmen opened fire at a hotel and a cafe in the capital of Burkina Faso, Ouagadougou, on Friday last. The North African affiliate of al-Qaeda claimed responsibility for the attack, which killed at least 29 people.

Alaoui had been on assignment in Burkina Faso for Amnesty International for less than a week, working on a series of photographs focused on women’s rights.

Her work, which combined lyricism with a desire to avoid easy sentimentality, had been displayed at museums including the Maison Européenne de la Photographie and the Institut du Monde Arabe in Paris, Art Dubai, the Marrakesh Biennial in Morocco and at galleries in New York, Argentina, the Netherlands, Spain and Switzerland.

It was also featured in publications including the New York Times and Vogue.

Alaoui said she was influenced by the US photographer Robert Frank, who travelled across the United States in the 1950s and chronicled American life with an unsparing honesty. Former French culture minister Jack Lang said Alaoui “was fighting to give life to those forgotten by society, to homeless people, to migrants, deploying one weapon: photography”.

London Fashion Week: Tommy Hilfiger and Lewis Hamilton show unlike anything else

What sold for about €500k in Ballsbridge, Dalkey, Sallynoggin and Lismore
7

Soup and a sambo gets more interesting on Baggot Street
10