Anthea McTeirnan: crisps and pop fuel young to fight back 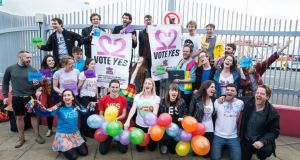 Members of Boat to Vote, a group of Irish people returning from London to vote in the referendum in Dublin last May. Photograph: Dave Meehan

They say that youth is wasted on the young. What a load of rubbish.

Some of us were bringing you up while we waited for this to happen. Filling you with bargain crisps and cheap fizzy drinks. Pushing your buggy through dingy streets. Passing on clothes for you to give another wear.

Looks like your diet of the gods and your introduction to gritty urban architecture and “vintage” clothing has paid off. You are charging over the hill like delicious hobbits ready to save us from ourselves.

You are ready to save those of us who got distracted by cheap narcotics, cheap booze and expensive mortgages from accepting a status quo of silence and subjugation.

You came home for the marriage equality referendum – literally and figuratively. You rang your grannies. You told your uncles what voting “yes” to equality would mean to you. You moved through the ferry terminals like you would move through a fair, singing beautifully, marching movingly, rucksacks on your backs.

You came and you were counted. Young people do vote. They care about the fundamental social building block of equality and they were willing to register their readiness, willingness and ableness to cast their ballots.

After the marriage referendum vote was counted, Mary Cunningham, the director of the National Youth Council of Ireland, said that it was heartening to see “a new generation of young voters make a decisive difference in an historic referendum”.

The Yes vote was a victory “for Irish society, Irish democracy, and the young people of Ireland,” she noted.

Pointing out what should be blindingly obvious, (but some veterans do seem to need blunt guidance), the then president of USI Laura Harmon said: “Our political representatives need to engage with young people and listen to what they have to say during the next election.”

As Eva Herzigova once pointed out in a brassiere advert: “Hello boys! It is time you damn well changed.”

Well, she said the first bit.

Irish politicians need to listen alright. The new leader of the British Labour party, Jeremy Corbyn, says he plans to do a lot of listening, then to act as a conduit for the views of the people. Normal terms and conditions about privilege and power apply, of course, but it is a change of political direction in a land ruled and bankrolled by Eton alumni. Who knows? Listening might just catch on.

Corbyn even plans to change prime minister’s question time in Britain’s House of Commons by refusing to play ball.

He wants it “to be less theatre, more fact, less theatrical, more understandable. I think it’s very exciting for political obsessives, it’s utterly boring for most of the population, who think it’s an utter irrelevance.”

And appointing a majority female cabinet of 17 women to 16 men – for the first time in Britain’s history – is a massive change, however much a super unsympathetic press carp on about influence. Hello boys! Some shot at influence is better than no influence, isn’t it?

So, are you listening Enda Kenny? Let’s hope some new broom will sweep towards Leinster House too.

Supporters of Britain’s New Labour (or “Old Labour” as it is now, do keep up) gurned about the great unwashed stumping up £3 to join the party and bag a vote for the leader. They seemed to be handily ignoring the fact that a significant number of the Labour Party’s new members had not done anything that “great” and were not all “unwashed”. However, a good few of them were young.

Young people finding the motivation to join a political party? Corbyn, what have you done?

As former mayor of London (and thorn in New Labour’s side) Ken Livingstone said after Corbyn’s win: “We owe it to our children to change the direction of Britain.”

A noble sentiment, even if some of our children have busted our asses here in Ireland and in Britain recently with their brilliant, energetic opposition to the status quo.

These children might have helped to give British politics a boot up the rear.

These “children” have helped to deliver us from evil in Ireland by making sure the battle to get equal rights to marry the person you love was won.

Now it’s payback time. My children’s mother (aka me) was not able to vote in the 1983 referendum. We can all vote now. It’s quite literally a family affair. And we have all learned what we can do if we pull together. We can win. It’s an addictive habit.

To paraphrase Ken Livingstone, I owe it to my children to change the direction of Ireland.

Luckily, it’s payback time for all those crisps and pop, and it is likely that they will, in fact, change Ireland for me. We have doubled this household’s voting tally. With apologies to Fuzzbox (no, the kids had no idea, either): we have several ballot papers and we’re gonna use them.

If any Irish politicians want those first preferences, they better start listening.