At the age of nine Declan Bowens became vegetarian, and later vegan. ‘Just because we can do it, doesn’t mean we should,’ he says of meat-eating – not a popular position in rural Ireland 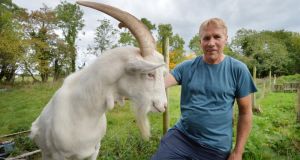 Declan Bowens, who runs the Back into Daylight sanctuary in Co Meath, and Louis the goat. Photograph: Alan Betson

Declan Bowens is a vegan who grew up on a farm. He is an animal rights protester who was born and bred, and still lives, in hunting country, and he’s had the stitches in his face to prove it. At nine years old, when he was living with his four brothers and three sisters on a 25-acre farm in Co Meath, he became a vegetarian.

“It was about that age that I started putting two and two together.” He has never regretted his decision.

“When a calf came to be born, we were all called to pull it out. And young animals are beautiful.”

Everyone would be stroking the calf and cooing “sucky, sucky” at it. “Then the next thing you’d go into the house and it would be in a saucepan for the dinner.

“My mother didn’t mind my decision, she just cooked me something else. No one was concerned with my health,” he says.

They were right not to be too concerned, because Declan is a big guy, strong and weatherbeaten. It is hard to imagine anyone less like the vegetarian stereotype of pale, slim and urban. He recently made for a striking sight on stage at discussions following showings of the Canadian animal-rights film The Ghosts in our Machine.

He drove the Canadian director of the film, Liz Marshall, around Ireland. At the screening I attend, he explains briefly that being a vegan and animal-rights activist in the countryside does not make you popular with your neighbours.

But what he saw on his father’s farm left him with no doubts. “Sometimes a cow would go down before she calved. You’d have an awful time trying to get her up with ropes. Later on we had a hoist, but the pain and suffering she went through . . .”

He sketches the device that would be attached to the cow’s hip bones to drag her to standing. “One time, a pregnant cow fell in a ditch, and the vet came and split her open,” he indicates from his throat to his crotch. “Her womb was out on the grass. That was a fierce thing. The amount of stitches: a yard long. She died on the ground. Animals feel pain. Just because we can do it, doesn’t mean we should do it. Animals are smart. They have to be smart, just to survive.”

His father would say: “It has to be done.” He had about 12 dairy cows.

Farming, as far as Bowens is concerned, “is still the same carry-on today”. Bull calves are sent for slaughter; the life of a dairy cow is horrid and short.

He worked in a factory making Navan carpets; working on the machinery that ran the looms. He brought tomato sandwiches for his lunch and got slagged about turkeys coming up to Christmas every year. He played midfield in the local soccer club, Follistown FC. He and his brothers were all soccer players, back when soccer was tough. “There were killings,” he says.

He used to go to Dandelion Market in Dublin each weekend, to publicise the vegetarian way of life. That seems like hard work after a week of 12-hour shifts and a lot of football. “If you’re a true vegetarian or vegan, you want to tell people about it.”

He went to night clubs on Leeson Street. He met his partner, Sharon Dunne, in the nightclub Zhivago, where love stories really did begin (as the Zhivago slogan went). The two of them wear matching Croc shoes. It’s cheap to be a vegan, they say; Aldi does a vegan margarine, as well as good veggie and bean burgers.

“Most people don’t know where their food comes from; it’s just a plastic bag in the supermarket,” says Bowens. But if you’re eating animals, they say, you should know how they live and die. “All suffering is the same.” They’ve no time for the denial at the heart of modern meat-eating.

They won’t go to family barbecues: “There’s nothing for us to eat; there’s a whole hen on the barbecue.” They pop along later, they say.

They now both run an animal sanctuary called Back into Daylight, and the most striking thing about walking around it is the calm of the animals. All the other creatures are very quiet. Even the geese are slow to get narky.

Most of the animals here are rejects or refugees from the farming industry. These include hens that were bought up en masse from a battery farm and a lot of exotic cockerels that grew too troublesome for their ageing owners. “They just come from different places,” says Bowens. “They’re beautiful, aren’t they?”

And mostly they are, except for Aero, a Muscovy duck that is no oil painting.

Keeping all these animals costs money, although they are fed scraps and vegetables from the beautiful vegetable garden. The dogs – to my horror as a cook – are fed the beautiful eggs that the hens are still producing, and which, of course, Bowens and Dunne don’t eat.

Finding money for Back into Daylight is a constant headache, despite fundraising schemes such as a recent day trip to the Burren.

Louis, a beautiful white goat with horizontal irises in his eyes, does not get excited. He stands up on the gate, and he and Bowens look at each other face to face. Bowens was told that Louis would be less bumptious and prone to injury if he were neutered. “And so I got it done and it didn’t make any difference, and now I’m sorry I ever did it.”

Arthur, the huge wild boar that escaped from somewhere and was found causing a traffic jam on the main road near their house, making him one lucky boar, does not get excited. But still, everyone is very careful around Arthur.

Stag hunting, despite the recent legislation banning it, is still going on in this country, says Declan. “They’re cub hunting at the moment. It’s wicked.”

He gives me a bag of beautiful vegetables. He also gives me films to watch. One of them is called Turkeys’ Lives. I don’t want to watch it. But I know I’ll have to.