A walk on the wild side: meet the first woman to YoYo the Pacific Crest Trail

Last year, a 44-year-old Dubliner walked out of her life in the UK and on to the plains and mountains of America. In doing so, Olive McGloin, from Beaumont, became the first woman in the world to walk the Pacific Crest Trail, from the borders of Mexico to Canada and back again, non-stop. It’s the same 2,650-mile route (one way) that Reese Witherspoon’s character walks some 1,000 miles of in the film Wild.

They call it the YoYo when you attempt the return trip in one go – and the test it presents is hard to imagine. With her husband, Darrell Johnson, she left the starting point at El Cajon, near Campo California, on April 25th, taking the first of tens of millions of steps that would bring them to the Canadian border and back. On August 3rd they touched Canada and immediately turned around and started walking back to Mexico, reaching it on November 5th last. Borders are powerful but it was what the landmass of the US offered them between these two borders that mattered.

Desert, mountain plains, deep snow, sheer ice cliffs, volcanoes and long tarmac roads. Forests enclosed them and valleys consumed them as they hiked through California, Oregon and Washington State. They walked for miles through the smoke of forest fires, losing the bright blue shimmer of Lake Tahoe to clouds of smoke and ash and slept under skies of shooting stars, full moons and hard hammering thunder and lightning. The ground beneath them was ever changing: sand, rock, ice, snow, water and tarmac seemed to meld together along old pioneer trails and high mountain passes. The trail passes through 26 national forests and 48 wilderness areas. Sixty per cent of the trail is simply wilderness. It is one of the most challenging hikes in the world – and utterly seductive. 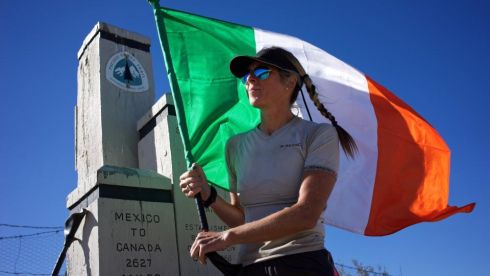 They took hiking names: she was Raindance, he was Chimp. They walked on average 27 miles per day – that’s more than a marathon every day for 195 days straight. Their legs grew stronger while their upper body wasted away. It’s the typical physique of the long-distance hiker.

Olive’s motivation is personal. It’s one of the healthier ways to spend a mid-life crisis, she says, but it changes you forever. She took the trip on for herself but also in memory of her father, Paddy McGloin, who would have turned 80 the day they set off. He had brought them up to seek out challenges, she explains, spending countless days climbing mountains and scaling heights all around Ireland and beyond. She talks of his boundless energy and appetite for adventure and even the briefest mention of this life well lived conveys how much he meant to her. They had planned the trip together and he had hoped to come along and meet them at various points to deliver supplies and spur them on but passed away when they were planning the trip in 2011.

On the road, they were hungry all the time. The quantity of calories needed to keep going was phenomenal and while they had planned everything carefully, there was rarely enough food to sustain them. This is a pretty standard experience for hikers, carrying only the most basic of supples, as every extra ounce of weight increases the load. Olive talks of lying awake at night with hunger cramps, willing the morning to come so they could have breakfast. But sunrises that greeted them made it all worthwhile. The views that met them almost every day were humbling, she says, and gave them a renewed sense of their place in the world. They were incredibly happy together on the trail, she says. They had such a simple purpose: just keep going. The people that they met along the way were wonderful, she says. Helpful in the true sense of the word, bringing her to a belief that maybe the world isn’t as bad a place as we all think, once you put yourself out in it. 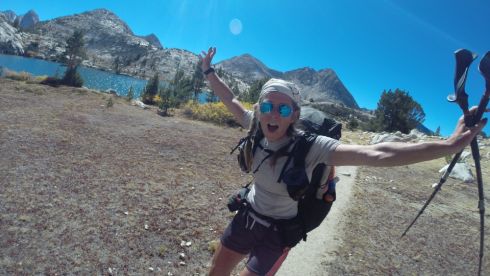 But nothing lasts forever and a day came that tested them both. Darrell got injured in a freak fall. He tried to carry on for a couple of days, masking the pain, only telling Olive after the trip how much pain he had been in. Eventually, early on the return leg, they had to accept that he couldn’t go on, that he had to seek out medical help. Equally, he argued, Olive couldn’t stop. She needed to continue alone.

It was one of the hardest days, she recounts. They parted on the Bridge of the Gods, a wide metal bridge that straddles the mighty Columbia river. She decided not to turn around but just keep walking, pushing distance between her and her husband. This was the biggest test, she says. She had to ask herself “Why am I doing this? This was a trip to unite us. Walking it alone made no sense.” But she’s stubborn, she says, and kept going until she was back in her routine of sleeping and walking, but this time without a partner to push her on.

This raised the danger levels to a new height. She had no phone coverage, little technology of any use. No GPS unit or safety beacon. If she fell in a gully or got injured, no one would know where she was. Occasionally she would meet other hikers and pretend that Darrell was off on a toilet break in the forest. Was this for protection? No, I was afraid word would somehow get back to my mother that I was continuing alone and she would have been really annoyed with me. She laughs at the idea, oblivious to how brave others think she is – and probably a bit crazy she adds. 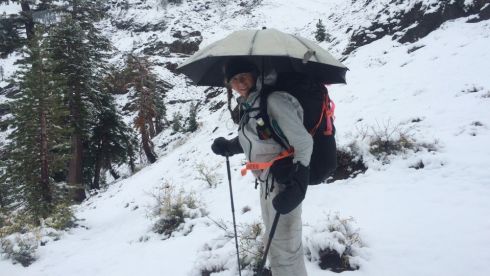 The trip also gave her hope for the environment too. As she walks, she tracks eagles overhead, huge black-winged buzzards and the so-called cheeseburger bird. She doesn’t know what its real name is but it's known for tormenting hungry hikers with a comical call that is said to resemble the word cheeseburger. She met brown bears and their cubs and was stalked by a big cat. She came upon a skunk in her path that turned its behind on her, daring her to come closer, and faced down rattlesnakes and many of its less fierce cousins. Mosquitoes dived in thick clouds like smoke and yellow jacket wasps left their vicious sting on three different occasions. The wild is alive, as she tells it and it makes you want to throw your own possessions to the wind and take to the trail.

This trip changes a person, she warns. It’s hard to return to real life; to work, cars and mortgages. Both she and her husband are air traffic controllers and they’re back in the UK trying to re-enter life. It will all eventually click back into place, she says, but it’s a difficult re-adjustment. They need a home and a way of paying for it. They’re lucky, she says, they have choices, and you need to be ready for that before you even leave. For now the road is wide open but up ahead there’s always another trail, another way to get back to the wild. 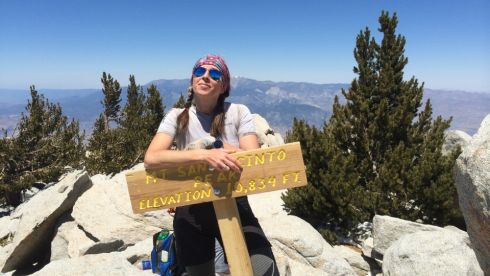 It’s hard for her to advise whether someone should or shouldn’t do this trip. It has to be a personal decision, she says. Don’t think too much about it, just do it. Everyone should have dreams and something to aim for. People are stronger than they think, she suggests. And the hardship encountered will translate back into your life afterwards, knowing you are happier with less. You don’t have to hike 5,000 miles, she says. For most people, a hike of 10 miles is a huge achievement. Be bold, step out of your comfort zone, scare yourself. Ultimately, live life – because when it’s gone, it’s gone.

For more on the Pacific Crest Trail see pcta.org