A tougher Mary Poppins with a missing suffragette

Mary Poppins is my favourite musical. And although I love Cameron Mackintosh’s stage spectacular, I can’t help feeling annoyed by one development 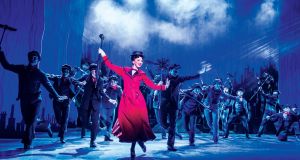 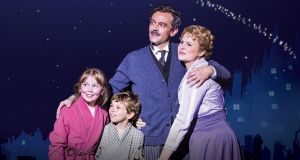 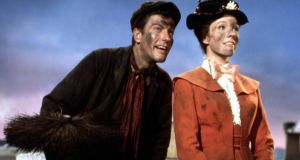 Julie Andrews and Dick Van Dyke in the Disney film

‘In every job that must be done, there is an element of fun,” I tell myself as I trudge through the rain towards Dublin Airport’s Terminal One at an ungodly hour on a Saturday morning. “You find the fun and, snap, the job’s a game.” Today the fun is not particularly hard to find. Yes, I may have had to get up at 6am on a Saturday to catch a flight, but I have done so in order to see Mary Poppins on stage at the Bristol Hippodrome, several weeks before the show begins its Dublin run.

Ever since I saw the 1964 Disney film at an impressionable age, Mary Poppins has been my favourite musical. Which is saying something, because I love musicals. There’s a part of me that, against all logic and indeed sanity, wonders if it’s too late for a 40-year-old woman – who last acted on a stage in 1992 and danced on one in 1985 – to become a musical theatre star. As children, my friends, my sisters and I went through a phase of acting out bits of Mary Poppins every day.

Alas, as I grew older, musical stardom eluded me. As if to taunt me, my school started to stage musicals two years after I had left (whereupon my younger sister got the lead role in the very first one). It wasn’t until 2012 that I was able to vent my frustration at these stifled dreams by writing a book, Rebecca’s Rules, in which the heroine takes part in her own school musical. The show was Mary Poppins.

So why did I – and millions of other children – fall in love with a film made long before we were born? Well, of course there’s the cast – not just Julie Andrews and Dick Van Dyke (whose charming performance transcends his legendarily appalling “London” accent), but Glynis Johns and the always wonderful David Tomlinson as Mrs and Mr Banks. I even liked the child actors, Karen Dotrice and Matthew Garber, even though children in films usually sent me into paroxysms of jealousy.

But mostly it was the songs, written by brothers Robert and Richard Sherman. There isn’t a dud song in Mary Poppins; even the weakest, I Love to Laugh, isn’t that bad. The best ones – Sister Suffragette, A Spoonful of Sugar, Step in Time and Supercalifragilisticexpialidocious – are spectacular, witty and musically inventive. Unlike some musicals, the slow songs aren’t dull ballads: Feed the Birds and my own favourite, Stay Awake, are full of melodic twists that change the songs from pretty to sublime (just listen to the last few lines of Stay Awake).

Cameron Mackintosh’s spectacular stage musical, which comes to Dublin’s Bord Gáis Energy Theatre on December 3rd, was first produced in the West End in 2004. It combines elements of the Disney film and PL Travers’s original stories and characters, removing some of the Sherman songs (including Stay Awake, alas) and adding new ones by George Stiles and Anthony Drewe.

It’s a hugely entertaining show, which manages to be spectacular without being bombastic. The touring set, as company manager Neil White informs us before the Bristol show, fills 18 giant trucks; dismantling it takes 24 hours.

Despite the grand scale, it feels genuinely magical. When the Bankses’ house unfolds itself to the audience like a doll’s house, I actually gasp in delight. The whole show is full of enchanting moments.

The small Bristolian children sitting beside me are agog throughout, but then so are the adults. When Bert performs a truly amazing move during the show’s highlight, Step in Time (I won’t spoil it by giving away details), a middle-aged dad behind me lets out a spontaneous cheer.

Zizi Strallen and Matt Lee, who play Mary and Bert with charm and panache, both grew up with the film. As a child, Strallen would watch “a little bit of it every day”. This helped when she got the job. “I didn’t really have to learn any of the words.”

Like me, she didn’t have a problem with Van Dyke’s preposterous accent: “I feel like Bert can have any accent he wants.”

Lee was also a fan. “As a kid, if I watched a horror film and I was terrified, I’d put Mary Poppins on afterwards to help me go to sleep,” he says. “It makes you feel very calm. Mary’s in control and makes everything as it should be.”

They weren’t daunted by taking on the roles made famous by Andrews and Van Dyke. Strallen’s sister Scarlett played Mary Poppins in a production of the musical 11 years ago. “I don’t remember the details, which is good,” says Strallen. “I haven’t been able to copy Scarlett, even if I wanted to.” Her Mary is less sweet than Andrews’s version. “This show is more based on the books. [Mary’s] slightly more feisty, more of a disciplinarian, which a nanny is. That’s what I try to bring to the show.”

Lee was also determined to make the role his own. “I made a point of not going back and rewatching the film,” he says. Mackintosh also told him not to see the stage show beforehand. “He wanted me to create my own interpretation of it. I’m grateful for this; no one wants to be seen to be imitating someone else’s performance.”

Although I love the stage show, I can’t help feeling annoyed by one development. In 1964, Johns’s Mrs Banks was a stylish feminist whose big song is the wonderful anthem Sister Suffragette. “Political equality and equal rights with men,” she cried. “Take heart, for Mrs Pankhurst has been clapped in irons again.” It is funny, lively and very catchy, and it was my first exposure to the suffrage movement. It remains my favourite feminist song of all time.

But it’s not in the stage show. Now Mrs Banks’s big song is called Being Mrs Banks and is essentially about her devotion to her husband. Alas, this is what Travers would have wanted. She was not a fan of the Disney film. When Mackintosh first met her in the 1990s to discuss creating a stage show, she initially didn’t want him to use any of the Shermans’ songs. She particularly disliked how Disney had changed the female characters. “How could dear, demented Mrs Banks, fussy, feminine and loving, become a suffragette?” she wrote to a friend in the 1980s.

A bit of feminism

Although it no longer includes chimney sweeps shouting “votes for women, step in time”, the stage version of Mary Poppins is still a show about an uncompromising single woman who comes and goes as she pleases and is adored by everyone for it, so there’s a bit of feminism left.

In fact, the whole thing is a treat. So Mr Mackintosh, if any of the cast are struck by a mysterious ailment during the Dublin run and you need a totally inexperienced middle-aged amateur who knows all the words to step in at the last minute, you know where to find me.

Are you having trouble reading this headline?
10