A challenge to relish for Ballymaloe

Not everyone was happy when Ballymaloe Relish teamed up with McDonald’s recently, but the product was never intended to be exclusive 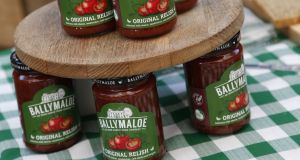 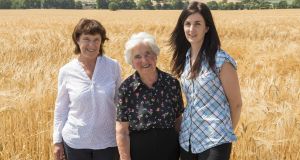 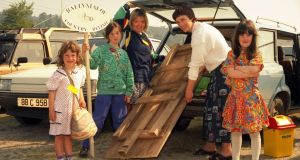 Yasmin with her daughters, Rosaleen, Corinne and Maxine, along with Elizabeth Goff, unpacking for the Bandon Show in 1993

When you step out of the car there’s nothing about the 1960s brown brick and galvanised building that says “country house cooking”. But the air is full of the nose-prickling tang of tomatoes stewing in sugar and vinegar. It’s the smell of a heavy-bottomed pot blipping on a stove until its contents are ready to be tumbled into jars for winter.

This is the home of Ballymaloe Country Relish. We’re not in rolling fields and countryside but in a business park in Cork’s Little Island, which is where this €4 million business is run by Myrtle Allen’s daughter, Yasmin, and grand-daughter, Maxine.

Yasmin has been making the relish for 25 years. For the first five years she made it in the grounds of Ballymaloe, before moving to Little Island. Next year they’ll move again to a larger building in the industrial estate as the business grows.

I have to confess an early addiction to Ballymaloe Relish. It was a cult ingredient when I worked in the newsroom of the Sunday Tribune in the late 1990s. In the O’Brien’s sandwich bar across the road, we queued for a slather of its jammy tang. My slightly weird wrap of choice involved Ballymaloe Relish and tuna.

In the lobby there’s a poster-sized picture of a barely recognisable teenage Rachel Allen standing in a sunny field holding a ploughman’s lunch: a doorstop wedge of crumbly cheese, bread and relish.

Through the factory doors you enter the clanking, steaming whoosh of the cooking and jarring operation. Another waft of the sweet tangy heat hits your nose. It’s all coming from the cooking room, where stainless steel vats each have bubbling, steaming batches of relish, stirred by a mechanical arm. Beside each vat sits a trolley with the ingredients weighed out for the next batch: sultanas, onions, sugar (lots of sugar), Italian tomatoes and tomato puree. The vinegar goes in later. There’s nothing here you wouldn’t find in a domestic kitchen.

“We have nine cookers,” Yasmin says. “They really imitate what you’d have in your kitchen. They’re just bigger.” Each batch will be cooked for about two hours. They’re working overtime for the Christmas rush. “So we’re doing about 50 batches a day, every day.”

Twenty people work in the small factory, where they’ve just added a new room for their new pickled beetroot. They only cook the beets once a week. It’s a pink-juice-spattered production line. Maxine jokes later that every spare pair of hands in Little Island is involved on beetroot day.

They love the beetroot, not least because it’s grown by local farmer Joe Hartnett. Yasmin bumped into him in the carpark of SuperValu, gave him her card and asked him to plant five acres for them. “Most of our ingredients we have to import, so it’s nice to be using something we can grow locally,” she says. “It’ll cost us more money to get further but it’s close to our heart. We hope it’ll pay off some day.”

It’s been a big year for Ballymaloe Relish. Their jars went on to the shelves of 900 UK Tesco outlets this year. And it was slathered on to McDonald’s Irish burger, the McMór, for six weeks.

The relish recipe was a way to preserve the tomatoes grown by Maxine’s late father, Ivan, in the heated glasshouses that stood where the Ballymaloe Cookery school is now. Yasmin and her siblings would be packed off to boarding school with a jar to make school food taste better.

The recipe isn’t exactly a secret but it’s never been published in a Ballymaloe cookbook. “I think the reason it’s not copied all over the place is because those cookers are really small in terms of industrial cooking,” Maxine says. “We’re cooking it in really small batches and for a very long time. That’s really expensive.”

Yasmin decided to turn the relish into a business because of its versatility and appeal. She didn’t use farmers’ markets to trial her idea (they weren’t a feature of retailing in the late 1980s) but spent two years researching it.

She was determined to be able to sell it for less than £2 a jar. “And she doesn’t mention having four children under six,” Maxine interjects, smiling. When Maxine, the second eldest, was four, “Yasmin said, ‘No one’s ever tried it and you’ll be the first to try it.’ That was your way of tricking me into tasting it. I loved it. And since that moment I wanted to work with the relish.”

Yasmin got a lot of advice to go posh. There’s still a push to move from the jam jar-style container. “I’d an appointment with Córas Tráchtála and they put me in touch with a designer. He picked up the jar – I think it had a white label at the time – and he said, ‘£1.85: that’s very expensive. There’s nothing about this label that suggests this is an expensive product.’ And I said to him, “I don’t want it to look expensive.’ ”

The green paper caps on the original jars (a “handy one for the kids to do,” Maxine says, remembering hours of childhood work) have gone. But the plain jar remains the same.

So how did Ballymaloe Relish, a name linked to slow food and from-scratch cooking, end up in a McDonald’s burger? It began a year ago when Maxine got a phone call from Bord Bia telling her about the fast-food chain’s plan.

“I didn’t know what to think,” Maxine says. She texted Yasmin, who was on holiday. “Mum just said she always wondered why they didn’t have it on the menu.”

Was that not going to cause some raised eyebrows at the next family gathering?

“That’s not the way Mum has ever worked,” Maxine says. “Even from the beginning, wanting to see the jar for under £2; Mum felt that anyone can buy our relish. We sell it to wholesalers and it gets into sandwiches in Starbucks. So Mum said we never stopped anyone from buying it. We’re not changing our recipe. We can stand over it.”

Maxine travels to food shows across Europe and runs the Twitter account for the company. She keeps screenshots of complimentary tweets people send about the relish, plenty of them outside Ireland. They heard anecdotally that their relish is the “most confiscated item at Cork Airport”.

She was worried when the news broke about the burger. But there were just two negative tweets. How did the rest of the extended family take it? “We did have one or two family members [express some reservations] but we have to stand up for ourselves,” Yasmin says.

The burger sold better than expected. McDonald’s ended up buying more relish than their original order. Would they do it again? “I think so,” Maxine says. “It was a scary step. I’m glad we did it and it worked out well. We’re not going to turn down people. My mum doesn’t work for PR. We just do what we do.”

Do you know what’s really in your mayonnaise?
Real news has value SUBSCRIBE