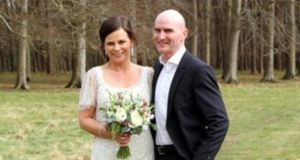 “It’s a very modern fairytale,” said Naomi Nally, who grew up in Kilcloon, Co Meath. “When your 15-year-old son gives you away, your eldest daughter is a bridesmaid and your other kids are the ring-bearer and the flower girls, you know this isn’t your run-of-the-mill love story.”

“I accepted my love prospects were slim but the romantic in me never truly died.”

One Sunday in 2011, Annie asked her mum about her first boyfriend.

His name was Padraic Scully, they had dated for a few weeks in 1986 while at school in Kilcock, Co Kildare, and there had been no contact for 25 years until Naomi saw him on Facebook. He was living the single life – working, surfing and kayaking – in Sligo. 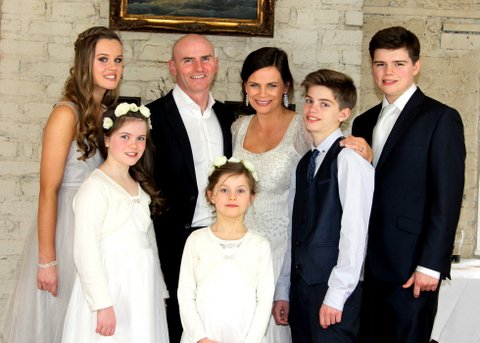 They emailed for six weeks, met for a coffee that lasted three hours, were engaged two years later and married on March 27th at the Anglers Rest in Chapelizod.

Among the 90 guests were friends who played key roles.

Helena Goss recited The Invitation, a favourite poem of the bride’s; Joanna Burke sang; Niamh Todd and Mary Mangru took photos in the nearby Phoenix Park; and Niall O’Loughlin, who designed the wedding invitations, drew caricatures of guests during the reception.

Naomi’s dress was from Kathy de Stafford and her bridal party found theirs at Debenhams. Stephen Kelly of Zeba Hair and Danielle Mahon did hair and make-up.

Instead of a wedding cake, Emily’s Pantry created a dessert table. Floral bouquets were by Moira’s of Dunshaughlin and music on the night came from popular trio Tropical Storm.

During his speech, Padraic, who works for Aer Lingus, said: “Today I didn’t just become a husband, I became a father.”

“We truly never know what life has in store for us,” said Naomi. “It’s never too late to meet the man of your dreams.”

The newlyweds honeymooned in South Africa and this summer the family of seven will move to Co Sligo to begin the next chapter of their lives.