Twizy twinkles but can Renault recover in Ireland? 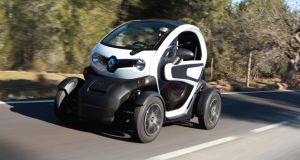 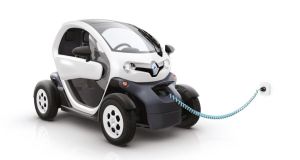 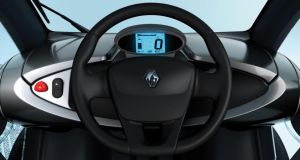 Renault has something of an image problem in Ireland. To the true motoring enthusiast, Renault is one of the most storied and innovative car makers that has ever existed, the firm that essentially invented the modern hatchback, the MPV (both full size and compact) and in many eyes perfecting the hot hatch with the original 1994 Clio Williams.

In Ireland though, Renault’s recent success was built on two pillars - plain vanilla hatchbacks and saloons (the Megane and Fluence mostly) and, during the most recent period of government-supported ‘scrappage’, large-scale discounting.

While the discounts lasted, Renault’s Irish star rose, but now that they’re gone, its market share has fallen back considerably and there are indications that much of the decision-making for Ireland is now falling under the remit of Renault UK.

So it was that we decamped to Mondello Park racing circuit to investigate the two sides of Renault - that of the great innovator and motorsports success, and that of corporate worries and hard cash.

Speaking to incoming Renault Ireland MD Patrick Magee, there does seem to be come cautious optimism surrounding the Renault operation in Ireland. Despite the fact that sales are running at around half as much as they were at Renault’s recent peak in 2010, the brand is attracting significant new dealers, and it is one of only three brands in Ireland with its own finance arm (the other two being Volkswagen Group - with its myriad sub-brands of course - and BMW). Plus it also has its Dacia budget brand, which has the potential to contribute significant extra market share.

“Renault Ireland is here and we’ll be here for the future” Magee told us. “Renault Ireland is not a desk of the UK, it’s now part of a new management system within Renault Europe which links us to the UK, Malta and Cyprus. But the plan is that we are an Irish-based company with an Irish management team.” There will, however, be job losses at Renault’s Dublin headquarters. Magee would not be drawn on how many or when, merely saying that the company would have to monitor volumes and sales over the next few months and then make a decision, bearing in mind that it wants to expand again, not merely react to a contraction in sales.

Will the Twizy or a new Clio RS help those sales?

Probably not as much as a facelifted Megane (due in November) or Dacia’s new Sandero Stepway crossover or Logan estate, but they are both at least reminders that Renault can be about more than just market share figures or sensible hatchbacks.

The Twizy is a willfully odd machine, and it’s the third all-electric Renault to arrive on these shores (following on from the Fluence and Kangoo Z.E models). It’s a tandem two seat quadricycle that looks like a cross between an escaped pram and a Steven Spielberg special effect. Its tiny electric motor provides just 17bhp and 15Nm of torque, but these figures are enough for it to eventually wind up to an 80kmh top speed. It’s not a car, it’s what Renault calls “a new and unique approach to urban mobility.”

It’s also tremendous fun, from the moment you pop open the Lamborghini-style doors (a rather steep option at €800 including the zip-out windows). There is a conventional steering wheel and pedals, plus a push-button automatic transmission, but the rest of the Twizy is just barking mad. It feels barely any wider than your own shoulders, whines along like a miniature LUAS and corners with surprising verve and aplomb, at least at low speed. You can’t help but laugh as you trundle along.

It charges up in three-and-a-half-hours from a conventional three-pin domestic socket (you won’t be able to plug it into on-street chargers just yet) and Renault quotes a useful 100km range. It’s small enough to park nose-in to the kerb, but there is some doubt as to the legality of that.

It’s also, like all electric cars, very expensive, at €9,995 for a two-seat vehicle with no heater and little weather protection. Plus you have to lease the battery for an extra €50 a month. Plus the doors are extra.

Given that the Twizy is really a rival to mopeds, not cars, it’s hard to see the financial sense, and thusly Renault Ireland is releasing it here without any firm sales target. It’s merely there for now to generate interest and publicity. Drive it and you’ll probably love it. Afford it? Well, that’s something else again...

The appeal of the hot Clio RS should be simpler. A gorgeous shape accentuated by some restrained but effective add-on bodykit and menacing dark alloy wheels, the hot Clio should simply be the continuation of a grand Renault tradition of great small fast cars.

With a new 200bhp 1.6-litre turbo engine you’d think that would be the result. But while it’s certainly quick and it grips and steers with delight, it’s hamstrung by Renault’s decision to fit it only with a paddle-shift dual-clutch transmission. Far from making it feel like a junior racing car, it instead feels awkward, unintuitive and intrusive, changing up or down without warning or consent and generally making you wish Renault had just stuck with a conventional manual. A move that might have brought the price down from €33,000 (almost Golf GTI money).

But while the Twizy is expensive and the Clio RS frustrating, perhaps we should be thankful that both exist at all. Given Renault’s recent global financial difficulties, it would have been easy for it to just continue cranking out plain-jane Meganes and Fluences and ignore both its sporting and innovative histories. It would have been equally easy for Renault Ireland to ignore both models and concentrate on bread-and-butter family models. The fact that it hasn’t is rather heartening.

Probably no-one will buy either a Twizy or an RS from an entirely rational point of view, but it’s unquestionably a good thing that such irrational vehicles are available. The motoring world would be a greyer, less interesting place without them.