The Model 3 will be firm’s most mainstream car to date, targeting current Audi, BMW and Mercedes owners

Tesla Motors gave a sneak preview Thursday (March 31) of its Model 3 sedan, saying more than 130,000 people had ordered the car, even though it is more than a year away from production. Video: Tesla 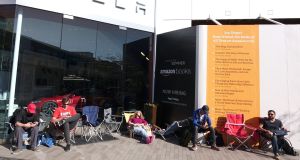 Customers waits in line outside a Tesla dealership at the Westfield Mall in San Diego, California ahead of the unveiling of the firm’s new Model 3 electric car.

The most long-awaited Tesla electric car to date will debut in the early hours of Friday morning Irish time, but some enthusiasts are already queuing to put down a $1,000 deposit on the new car, sight unseen.

At a glitzy event in California on Thursday night, Elon Musk is due to reveal Tesla’s Model 3, expected to be priced against the likes of the BMW 5-Series or even the upper end of the BMW 3 Series market.

The Model 3 has been billed as the car that will move Tesla from a niche sports car manufacturer to a mainstream rival to the established giants. And the fact thousands are prepared to back the new car - sight unseen - is testament to the reputation Tesla has built for itself in recent years.

People started camping out, iPhone-style, at several showrooms , and a man in Australia reportedly stood in line for 48 hours to be first to put down a deposit. This isn’t to drive away with a new Tesla; this is for a reservation to buy one many months in the future.

Prices have yet to be announced but expectations are that will go on sale in the US for $35,000. While that will vary with markets, the car will still qualify for the low tax and grants available for electric models. That means its price should be competitive with big volume premium rivals.

Part fot the rush to buy in the US is due to the fact a crucial U.S. federal tax credit set up to encourage development of electric cars is nearing its expiration. The tax credit’s complicated phase-out begins for each carmaker several months after achieving a cumulative 200,000 in US sales of electric cars. For Tesla, that threshold isn’t far off.

Morgan Stanley analyst Adam Jonas, a longtime proponent of buying Tesla shares, doesn’t believe Tesla’s Model 3 will hit the streets until late 2018, a year after Musk has promised it would appear.  Tesla will begin taking reservations for the Model 3 when showrooms around the world today, regardless of time zone. However, the rollout will start for priority groups in California and move east from there, eventually reaching buyers in Europe and Asia.

Even then customerse who drive on the left side of the road - like in Ireland - are expected to be last in line. To make matters worse for cash-strapped Tesla enthusiasts, the first cars off the production line won’t be the attractively priced model. Morgan Stanley’s Jonas anticipates an initial average price of delivered cars to be $60,000 before tax incentives.

The new Model 3 will be unveiled at an event in California starting at 8.30pm (4.30am Irish time).