Skoda’s Octavia is a cop car through and through. Here’s how the hybrid version measures up 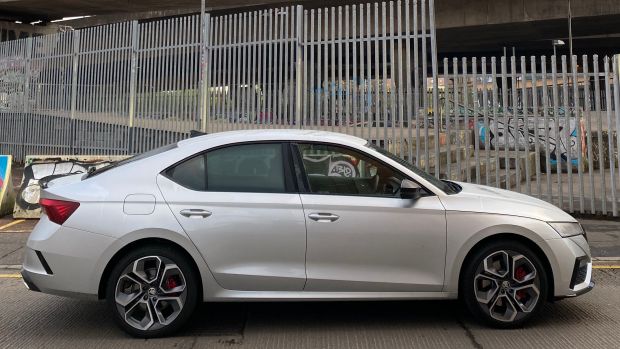 I am obsessed with Line of Duty, the BBC police drama in which bent coppers are investigated, OCG vehicles trigger ambushes, and the magisterial Adrian Dunbar bestrides the screen like a uniformed, colloquialism-spewing colossus.

Happily, living as I do in Belfast, where the series films its exterior locations, there’s an easy pilgrimage to be made. And the Skoda Octavia RS iV might just be the perfect car in which to do so. Why? Because the Octavia’s a cop car, through and through.

While the Garda Síochána has wedded itself to Hyundai of late, in the UK the sight of a Skoda grille in the mirror is a signal to double-check your speed and make sure your seatbelts are done up. Way back when the original 180hp Octavia RS was launched in 1999, it didn’t take your average constabulary long to realise that its combination of rapid performance, sturdy construction and a big boot made it perfect for policing. Early purchases of Octavia RSs were allegedly done on the quiet, as plain-clothes versions would stealthily trawl motorways for those speeding past what looked like a harmless, cheap Skoda.

Not so sure how such entrapment policing would go down with Ted Hastings – it’s hardly the letter of the law, fella – but the newest Octavia RS arrived at my door looking none-more-cop-spec. Finished in silver (usually preferred to white these days, as it’s easier to sell on once you peel the hi-vis stickers off) with the grille, mirrors, and the flick-up rear spoiler finished in uniform black, the RS looks quietly handsome, with a mildly threatening stance from some angles.

The alloy wheels – 19in rims on our test car – are clearly inspired by Lamborghini designs (Lambo being a distant VW Group relative, of course, not to mention a frequent supplier of high-speed patrol vehicles to the Carabinieri) and are, along with that boot spoiler, really the only thing that gives the RS away as being anything other than a regular family car.

Inside there are a few more clues. Our car came with an “RS Alcantara pack” that includes lashings of man-made suede on the high-backed bucket seats and even on the dashboard. It looks and feels great, but on a copper’s salary you’re going to struggle to justify the €2,079 that Skoda charges for that and the electric front seats.

The rest of the cabin is as per the standard Octavia, which means it’s excellent. You get a big screen in the middle of the dash, which is a little less fiddly than that offered by Volkswagen or Seat, and a nice, crisp, clear digital display behind the leather-wrapped three-spoke steering wheel.

On this iV version of the RS, you also get a socket. Lurking under the Octavia’s boot (truncated down to 450 litres, 150 litres fewer than you get in the standard model) lies a 13kWh battery, and in the left-front wing there’s a charging point. Hook it up to a charger, and in just over 1½ hours you ill have enough juice to drive for a claimed 60km (WLTP) on pure electric power. I don’t have a charger but was able to top up the battery in bout three hours from a three-pin socket. Realistically, you’re unlikely to get 60km, but in reasonable weather conditions 50km is doable, and 40km is easy.

Performance, in electric model, is also decently brisk. The electric motor – sandwiched between the 1.4-litre turbo petrol engine and the seven-speed DSG gearbox – has only 116hp, but a healthy 330Nm of torque all on its own, so in around town, there’s plenty of get-up-and-go. For the full RS experience, you need to awaken the 150hp petrol engine and unleash (by pushing the throttle pedal through a soft detente) the full 245hp and 400Nm of torque. Then, while the Octavia RS isn’t super-quick (0-100km/h in 7.3 secs isn’t bad, though) it’s certainly swift.

From the AC-12 headquarters (actually the Invest NI building on Bedford Street) to the site of the thrilling series six prison van ambush (actually where the M3 passes over Corporation Street, just off Belfast city centre) the Octavia wafted easily on electric power. A short cruise out to Holywood and into the hills behind revealed that, in petrol-and-electric mode, the Octavia RS iV disguises its extra weight (it’s about 200kg heavier than standard thanks to the battery) rather well, with weight-driven understeer only nibbling at the edges of both the chassis balance and your fun. Although this plugin version rides a little higher than the other RS models in the range, there’s little enough given away in the driving fun stakes.

Mind you, AC-12 might well launch an investigation into the practice of people buying such plugin-hybrids, enjoying the SEAI grant for doing so, and then not plugging them in. Well, not on my watch. Plugged in regularly, the RS iV easily does all my short-hop daily driving on battery power, and when asked to do longer journeys, using the petrol engine, returns about 6.5 litres per 100km fuel economy. My overall figure for the week was 4.9-litres per 100km, or 57mpg. Not bad for a GTI.

Of course, there always has to be a twist at the end, and that’s the fact that the Octavia RS has a distinct noise suppression issue. Most cars built on the Volkswagen Group MQB platform have excessive levels of tyre noise, but it is especially tiresome in the Octavia, and on top of that, the rear suspension itself is noisy, sending a constant low-grade series of knocks and thumps up through the back of the car. For something costing €43,000 as tested, it all seems a bit disappointing.

So, should we throw the book at the Octavia RS? No, not at all. Its refinement issue lets down the uniform, but it’s really only a yellow notice offence, not an issue for a full Regulation 15. After all, you have to take the rest of the performance into account. This is a family-sized car with rapid, if not quite exhilarating, performance, exceptional quality, engaging handling, the potential for lots of zero-emissions driving, and with enough space for Jesus, Mary, Joseph, and the wee donkey.

Interview terminated. No further questions at this time.