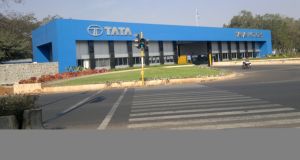 PSA Peugeot Citroen is close to securing a deal that would allow it to build cars in India in factories owned by the Tata Group. According to India’s Economic Times, the two companies are keen to ink a deal, which would see excess capacity in Tata’s plants (caused by slower than expected sales of the Nano city car) taken up by Peugeot, which wants to build 208, 308 and 2008 models there.

That would give PSA a quick and easy toe-hold in a fast developing car market, and would help to underpin a Tata bottom line that has been looking vulnerable thanks to the expensive failure of the Nano. The move could save PSA at least €1-billion in terms of setup costs.

More significantly for Europe, it could lead to a tie-up between PSA and Jaguar Land Rover. The two companies have collaborated before on diesel engines (when Jaguar Land Rover was still part of Ford) and have been discussing a possible engine sharing arrangement again recently. Any opening through the Tata group could be hugely advantageous at a time when Jaguar in particular is hugely expanding its model range.

Jaguar boss Ralf Speth has spoken in the past of his desire to make an Audi A3 rival with a Jaguar badge, but shrinking down the rear-drive platform of the XE and XF would likely be prohibitively expensive. Peugeot and Citroen already have a high-tech, front-drive platform, the EMP2, which is ready to go and which would easily be flexible enough to meet Jaguar’s needs. Such a move would also be hugely beneficial to PSA as it would allow for a greater return on the investment of creating the EMP2 platform.

It doesn’t stop there either. Jaguar Land Rover is currently breaking ground on a new factory in Slovakia, which could add another layer to a potential PSA tie-up. Land Rover could also bee keen on a new front-drive platform, which could allow it to more affordably engineer a compact model to slot in under the Discovery Sport and Range Rover Evoque and allow it at last to tap into the burgeoning compact crossover market.

So far, there is nothing official yet. The initial contact seems to have been made on the fringes of the recent Frankfurt motor show, but PSA Peugeot Citroen boss Carlos Tavares has apparently put the proposal on a fast-track.