Half a million speeding drivers caught and 81,067 mobile-phone users detected 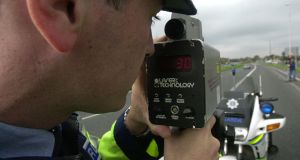 The number of drivers losing their licence for reaching 12 penalty points has almost doubled since the points for speeding, holding a mobile phone while driving and not wearing a seat belt were increased.

An analysis of penalty-point data shows that in 2014, the year the higher points were introduced, 251 drivers received 12 penalty points and were required to serve a six-month period off the road.

In 2015, the first full year of the higher points allocated for these offences, the number of drivers reaching 12 penalty points rose to 580. In 2016 this total rose again to 635 drivers.

The increases saw points for speeding, holding a mobile phone while driving and not wearing a seat belt rise from two points to three.

The number of drivers being put off the road could increase sharply again as Minister for Transport Shane Ross told The Irish Times in December 2016 he favoured doubling the penalties for speeding and use of a mobile phone while driving from three to six and also lengthening the period a disqualified driver spends off the road from six to 12 months.

Mr Ross said he would introduce the change if the trend in road deaths, which turned sharply upwards in 2016 with 88 deaths, did not reverse.

Speeding remains by far the most commonly detected penalty point offence with 549,574 incidents of this offence detected last. Along with the points, a driver detected speeding faces a fine of €80.

After speeding the next most frequently detected offence was driving while holding a mobile phone with 81,067 penalty point notices issued to drivers for this offence in 2016.

The third most commonly detected offence was driving without a valid NCT for which 16,814 penalty points notices were issued.

Some 14,661 notices were issued to drivers for failing to wear a seatbelt while the offence of driving without reasonable consideration – which also attracts two penalty points – saw 12,339 notices issued in 2016.

Failure to stop at traffic lights resulted in 10,975 notices, having no insurance 9,906, while 6,767 learner drivers were detected driving unaccompanied and allocated penalty points. This is more than double the total for 2015.

A further 3,894 points were issued to learner drivers who failed to display an L plate, and some 345 points to novice drivers for failing to display an N place. A learner or novice driver loses their licence once they accumulate seven penalty points.

There are 63 penalty point offences but handful are rarely used.

There was just one incident last year, in Co Cavan, of points being issued for driving a vehicle while unlit.

Similarly there was just once incidence of points being issued for driving a vehicle before fixing a defect and just seven cases of drivers being given points for failing to stop for a traffic warden.

In total, some 741,227 penalty-point notices were issued in 2016, of which approximately 10 per cent were to the holders of foreign driving licences.

At the end of 2016 some 608,786 drivers had penalty points on their licence with those who had committed one offence, resulting in three penalty points, accounting for 309,730 of these.