Nice day for Audi’s A3 convertible

With its A3, Audi wants to prove you can drive a convertible without a midlife crisis 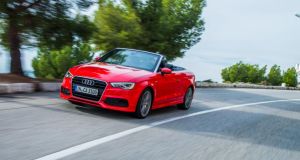 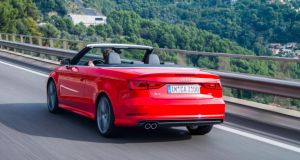 Cruising the hills of southern France in a convertible is a daydream many of us harbour as we slide the computer mouse across a formica office desk in the depths of winter.

As temperatures plummet and taxi drivers talk of snow, it seems like wishful thinking – or early signs of a mid-life crisis – to contemplate a car with no roof. Open-topped motoring may seem debonair on the Côte d’Azur, but it looks daft in Clondalkin or Coolock.

Yet Audi aims to change that for some – and with help from a Dubliner. Roof up or down, this car looks the part, and that’s largely down to the styling of Irishman David Caffrey, a rising-star designer in the four-ringed brand who adds this car to his portfolio of models currently on our roads.

Along with the rest of the A3 family, Caffrey also penned the Q5 crossover and has recently returned to head up a senior design team at the brand’s headquarters after several years at its Los Angeles studio.

As with the regular saloon, the A3 convertible handles remarkably well, thanks again to the VW Group’s mid-size chassis – the unfortunately named modular transverse matrix. Its name may be a mouthful but this is the same underpinning used in the award-winning Golf, and gives the A3 great poise and balance in bends.

The 2-litre diesel is clearly enough to kick this convertible on, but the 1.4-litre petrol is a bit of a star and, given its low emissions and relative fuel economy thanks to a cylinder on demand system that shuts down two cylinders at low load, it would be the wise buy for city and suburban motorists. For those who do more mileage then the 1.6-litre diesel is worth waiting for.

Admittedly, on the twisting mountain routes of southern France, the smaller engines didn’t pack enough torque to match the image. However, few buyers will be looking to repeat a stage of the Monte Carlo rally in their eyecatching new car.

Build quality
The rest of the features, from interior trim to build quality, are in line with what we’ve come to expect of the Audi brand these days.

As for the soft-top, it opens or closes in 18 seconds, even while driving at speeds up to 50km/h. You lose bootspace, but it’s not as dramatic as some non-premium rivals and there’s a useable 275 litres on offer.

Given that this A3 is likely to start at €35,000, that pits it well below its larger A4 convertible sibling.

Peruse the standard features list and it’s hard to see where the sacrifice is being made by opting for this over the larger model, particularly in the current economy.

For some it may seem too much of a leap to break free from their hard-top motoring routine to opt for the convertible lifestyle, but this A3 offers a safety net in terms of coupe looks and a well-respected brand.

Smart styling
The balance of refinement, space, driving characteristics and smart styling should give it top billing in an admittedly niche market.

There’s always going to be a hint of mid-life crisis about buying a convertible in Ireland, but Audi’s new A3 convertible let’s you drop the hood without looking like someone who aspires to become Ireland’s answer to Flavio Briatore.

ENGINES
1.4-litre petrol and 2-litre diesel will be the first to arrive in Ireland. 1.6-litre diesel is set to follow

OUR VERDICT
Not quite the mobile midlife crisis of other convertibles

Lockdown living: ‘We’ve moved into a cabin so the kids can have the house’
9